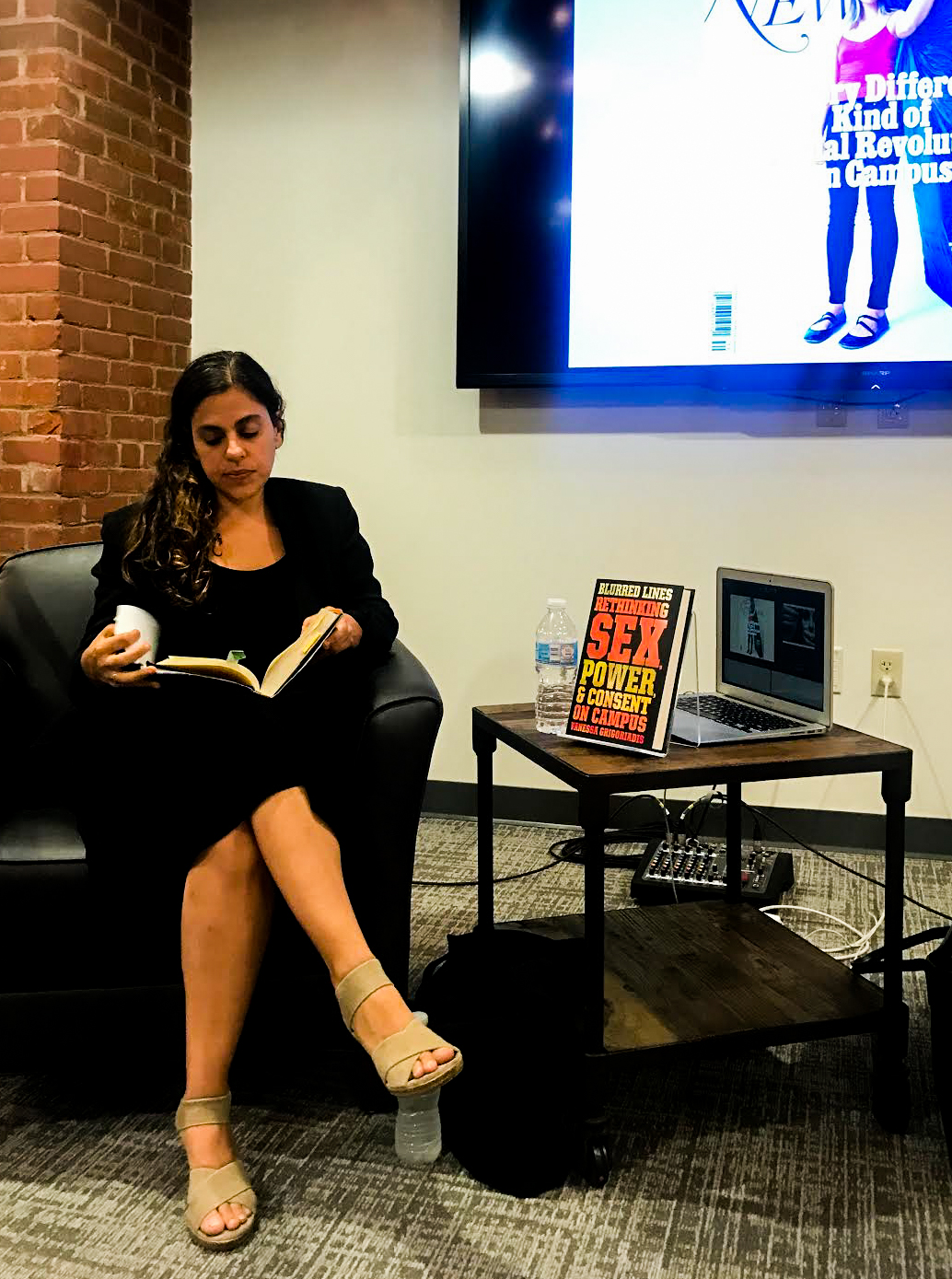 On Tuesday, Oct. 3, journalist Vanessa Grigoriadis talked about her new book, “Blurred Lines: Rethinking Sex, Power, and Consent on Campus,” at the R.J. Julia bookstore. She was accompanied by Professor of English Anne Greene.

Grigoriadis began her talk by discussing what her book centers around: ethical sex and the fight for sexual and gender parity on college campuses.

“This book is about the new rules of sex on campus,” Grigoriadis said. “My contention is that we’ve been talking about sexual assault a lot on various campuses, but we may be really talking about ethical sex: respect for a partner. Sex that is thoughtful and passionate. Sex that leaves the other person feeling more self-esteem versus less self-esteem.”

She continued by describing how the experiences of Emma Sulkowitz and the Columbia activists that participated in the project No Red Tape changed the landscape of sexual assault and the conversation revolving around it on college campuses. Sulkowitz and her friends began to carry around mattresses, holding enormous rallies at Columbia where students would write their demands and student groups in red tape, demanding that the university take issues of sexual assault seriously.

“There is no question that what Emma did was courageous and brave and she changed the situation around consensual and non-consensual sex on campus for almost an entire generation,” Grigoriadis said.

Grigoriadis then dived into Title IX and its political history. She argued that Obama’s changes to Title IX policy were only recognized and pushed nationally because activists put the issue under the microscope. Unlike times in the past, these activist groups could connect through social media to build groups fighting against injustices they’ve individually and collectively faced. This gave them the power to share their stories in a way they couldn’t before, which Grigoridis says has been a vital part of this issue gaining public support and recognition.

“They were able to talk to each other through the internet—which connects everybody today—and they started to say, ‘Oh, not only that happened to you, well that happened to me too,”’ Grigoriadis said. “They said, ‘Hey, that happened to you, student at Iowa State? You just wrote an editorial in your school paper that says that you’re a survivor and your university didn’t hold up its obligations under Title IX? I’m sending you an email. I’m talking to you on the phone. Do you know how I have on the other line? I’ve got the New York Times on the other line.’”

“I realized this school got a lot more rich, a lot more fancy, and a lot better in a lot of ways. Right?” Grigoriadis said. “It’s a much more exciting place, but also socially a much more complicated place than it was when I was here. It’s not sleepy little Wesleyan where everyone is just a weirdo anymore.”

She then read a passage from her book that dove deeper into the differences in nightlife and sexual culture at the University between the 90s and now.

“‘It’s funny to see the old alma mater looking so different when the students look the same as we did,’” Grigoriadis read aloud. “‘Youth culture’s twenty-year nostalgia cycle is coming back around exactly at the time I arrive on campus, and the school is awash in Doc Marten boots, velvet chokers, converse high tops, plaid flannel shirts, and shoulder slung mini-backpacks.… Not only do these students look the same, they also talk urgently about many of the same issues, in particular, sexual assault.’”

When she visited campus two years ago, Grigoriadis looked into the ways students were talking about sexual assault and quickly realized that students’ principles in regard to sex had shifted.

“I felt as though the distinction that a lot of students I spoke with were making was this idea of morality, which we didn’t really bring into the picture back then,” Grigoradis said. “There were debates about what was consensual and what was not; what type of sex is ethical and what is immoral.”

Grigoriadis built on this idea of moral sex to discuss the sexual climate at Syracuse University and the University of Virginia, focusing in on the Rolling Stone article where a journalist falsely reported a violent fraternity gang rape. As Grigoriadis described it, the story brought forth accused male’s perspectives on these issues and how these men have joined together to form stronger, more aggressively patriarchal groups.

“So, the accused boys started to come out and what’s their perspective?” Grigoriadis said. “Here’s one of their perspectives: ‘This is a witch hunt, no different than the Salem Witch Trials or McCarthyism. A fear has been sold to the country that every man is a potential rapist. This is now an American truth, just the way communists infiltrating and taking over our country was a truth of McCarthyism.’”

She then talked about how the election of Donald Trump and it exemplifies the nation and government official’s different understandings of the definitions of sexual assault versus groping versus rape.

“He not only boasted about groping women, but he had women come out and say, ‘He did that to me! He put his hand up my skirt in a nightclub!” Grigoriadis said. “A People Magazine reporter said, ‘I was interviewing him in Milan and he kissed me and pushed me against a wall!’ So, either people don’t care—which I don’t think is true—or we don’t all have the same definition of sexual assault.”

She then spoke briefly with Anne Greene about a variety of related topics—such as Betsey DeVos, the importance of being single as a young adult, and university involvement in sexual assault cases—before taking questions from the audience. The questions ranged from asking about Title IX procedures to the development of anti-rape culture. She shared suggestions for changing this sexual assault culture, which included disbanding Greek life and increasing self-defense education.

“In general, my attitude is like, let’s raise the consciousness, and as we get a little more conscious, let’s be optimistic that things are going to start to change,” Grigoradis concluded.