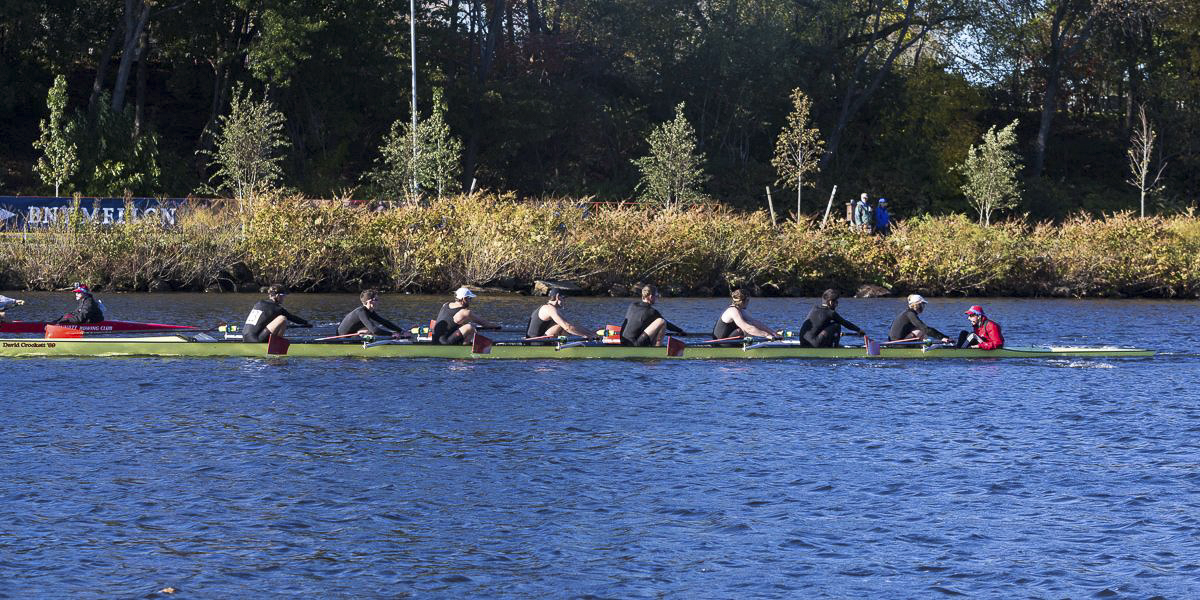 On Sunday afternoon, the Wesleyan men’s rowing team competed at the Textile River Regatta on the Merrimack River in Lowell, Mass., while the Wesleyan women’s rowing team competed at the Riverfront Regatta in Hartford. The conditions were ideal in both locations: it was sunny, the sky was clear, and there was very little wind. Not that the Cardinals need perfect conditions to thrive, but it certainly didn’t hurt.

The women’s rowing team picked right back up where they left off in the spring. Competing in the Women’s Open division, the Red and Black thoroughly dominated. In a meet that consisted of  Division I, Division II, and Division III teams, Wesleyan’s women’s crew, coxswained by Antonia Bascombe ’20, came in first place. Not only did they win, but they also defeated the next closest competitor by over twelve seconds, pushing themselves to utter exhaustion as they did so. It was well worth the effort though, as their time of 15:43.55 landed them in front of the University of Connecticut, Worcester Polytechnic Institute (WPI), University of Connecticut’s second crew, and Smith College, who rounded out the top five.

Women’s crew also had a second boat competing in the same Women’s Open division, winding up in sixth place. They were coxswained by Rachael Crunkleton ’20 and finished with a time of 16:36.57. This group was a mere two seconds behind Smith College, just narrowly outside of the top five. Wesleyan’s women’s crew has a lot to be proud of based on their performance this weekend, but there is still room for improvement.

In regards to the team’s performance, coach Pat Tynan responded, “I thought the team did a great job. I was satisfied, overall and believe we’ve made good progress in the past couple of weeks. There is always room for growth. We talk about that a lot. We could have prepared for the afternoon racing in fours with more purpose. We had gotten away from some of our race day routines and those things matter.”

In Massachusetts, the men’s rowing team competed in multiple divisions. In the Men’s Open Division, a team coxswained by Kenny Mckee-Proctor ’20 finished ninth with a time of 22:42.36, just over two minutes behind the Riverside Boat Club, who took home first place honors. The Red Birds virtually owned the Men’s Club Division, finishing second, fourth, and sixth. Once again, Riverside claimed victory, but the Cardinals were certainly well represented. The men’s crew also competed in the Men’s Collegiate Novice Division. Their coxswain was first year Malcolm Roesser ’21, competing in the first regatta of his college career. Based on their raw time, they would have finished in first place, but due to an adjustment that cost them thirty seconds, they fell to second. Finishing ahead of the Cardinals was WPI, and then just behind them came University of Massachusetts-Lowell and Wentworth Institute of Technology. An adjusted time of 21:12.478 for the Cardinals put them 26 seconds behind the victors from WPI. If not for their added time, the Cards could have come out on top in at least one competition in both the male and female divisions.

Overall, Wes crew has a lot to be proud of. The women’s first-place finish and a second-place finish is certainly nothing to sneeze at. Even the second unit for the women’s crew team, the one that finished sixth, deserves their share of notoriety: especially considering they competed against a field of 16. The men’s crew team also had a formidable showing on Sunday, and their successes show a strong start to their season.

This October, the Cards’ men’s crew and women’s crew teams will have plenty of opportunities to further cement their dominion over the region. On Oct. 21 and 22, both teams will travel to Cambridge, Mass. to compete in the famous Head of the Charles Regatta. It will be a two-day event, so the Cardinals will get a few more cracks at New England’s elites. Then the following weekend, on Saturday, Oct. 28, men’s and women’s crew will travel up to Saratoga, N.Y. to showcase their talents at the Head of the Fish. Both contests will be key for the Cards as they try to set the tone for what they hope will be another successful season.