Swing and Some Misses: Field Hockey Falls in and out of Conference 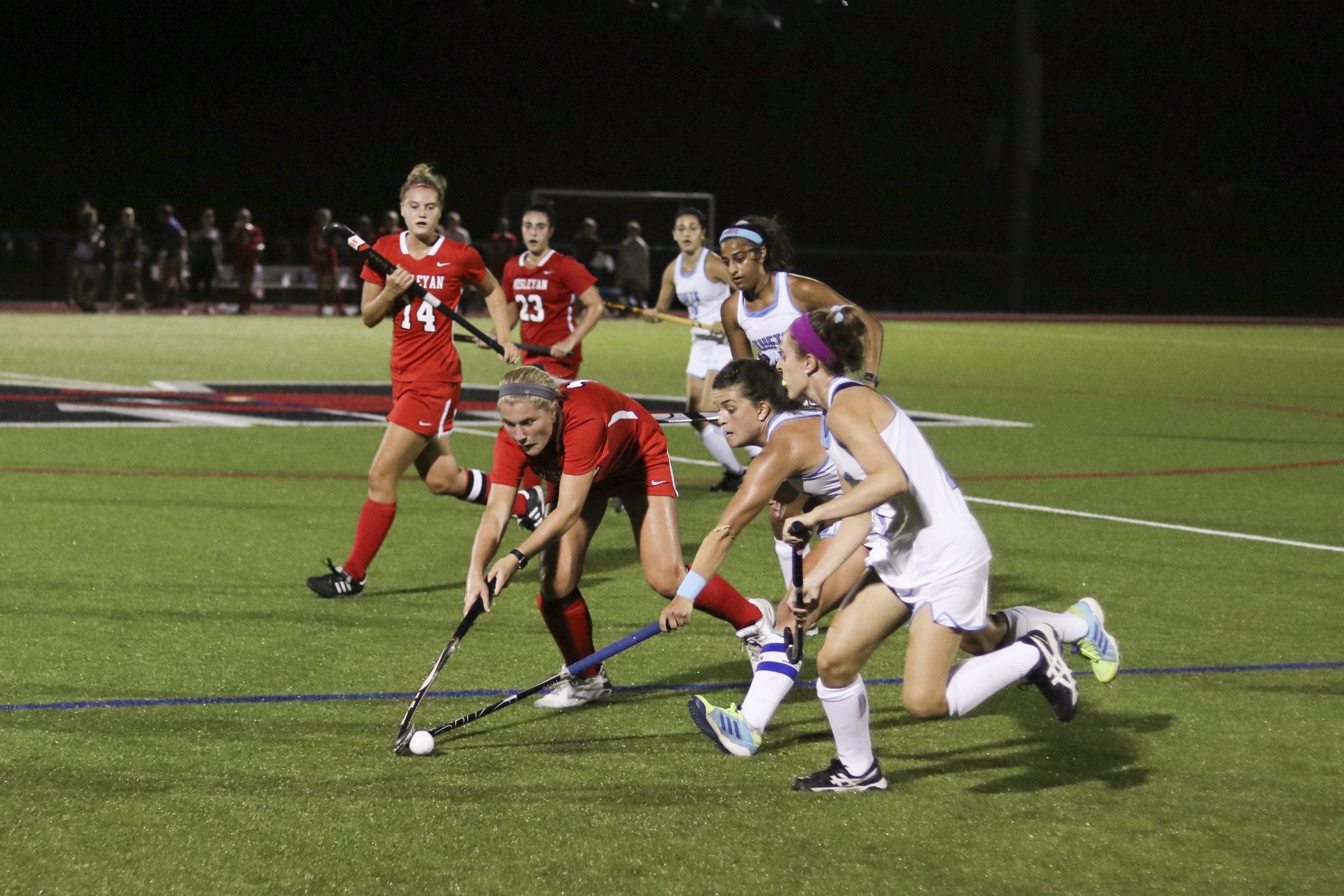 Despite a few rough games this past week, Wesleyan’s field hockey team managed to stay strong defensively and had several offensive successes. The action started on Wednesday, Sept. 20 in South Hadley, Mass. in a face-off against Mount Holyoke College. Although a part of NEWMAC, the New England Women’s and Men’s Athletic Conference, there was nothing new and inexperienced about the Cards’ opponents.

Throughout the majority of the first half, the Dirty Birds struggled, and as the clock toward the end of the half, star Holyoke senior Sophie Perekslis managed to net her fourth goal of the season with just 37 seconds remaining. Cardinal senior Cici Frattasio ’18 did her best to decrease the one-goal deficit, but the ball just missed her stick before the whistle signaled the half.

When the second half began, the Dirty Birds moved quickly and managed two shots-on-goal. Senior captain Tess Iannarone ’18 smacked a pass to Frattasio at the 22nd minute, but ultimately to no avail. Erica Horowitz ’20 followed their lead and nearly put the ball into net just over five minutes later, but was unfortunately met by the Lyons’ formidable goalie, Morgan Turner.

Lucky for the Cardinals, their own goalie, Delaney Wood ’20, stepped up her defensive game and racked 12 saves overall, 10 of which came in just the first half. In the 30th minute, she stopped a shot off a penalty corner and less than three minutes later saved another from Lyons’ senior Cymone Martin. Her save later at the 58-minute mark led to a fall in the 59th minute, when Mount Holyoke took a two-goal lead off yet another penalty corner.

Despite the deficit, the Red and Black kept fighting and increased the pressure on the Lyons until the very end, when Frattasio netted her second goal of the season, unassisted, with just eleven seconds remaining. By the time the whistle blew, Frattasio didn’t just lead her team in goals, but also shots-on-goal, with first-year Amy Schapp following with three of her four shots-on-goal.

After their tough loss to Mount Holyoke, the team returned home and started the weekend with a game against Bates on Saturday, Sept. 23. Currently holding a 3-4 overall record and 1-3 record in the league, Bates seemed to be a worthy, but not entirely formidable, opponent. Consequently, the confidence that the Cards inevitably held led to early offensive aggression, as the team found two quick shots-on-goal in just the first few minutes. However, Bates’ rigid defense held firm, and their potent offense eventually picked up speed, sinking a shot at the 14:57 mark.

The goal spurred something up in Frattasio, who came back to even the score around 30 seconds later. The rest of the half remained a stalemate, as both teams made strides towards goal, but failed to put ball to net.

Once the second half began, the Bobcats took not just a lead, but a two-goal one at that, within the first twelve minutes. Frattasio was slow to give up and eventually landed another shot in goal once the clock hit 63:53, but it was simply not enough to win the game, never mind stopping the Bobcats’ offense. Bates scored once more to round out the final score to 4-2.

Despite the loss, the game was a personal success for Frattasio, who reclaimed her goal-scoring reign of last season. Along with her is acquaintance Ali Friend ’19, who currently has one assist and a total of three shots-on-goal, two of which were registered against Bates on Saturday.

The contentious ’CAC competition continued with Tufts on Tuesday, Sept. 26. Channeling their mascot, the Jumbos took over their field with a large front to control the tempo of the first half and net a goal at the 16-minute mark. As the second half began, the visitors continued to conquer the Cards and added a second goal at 53:36. It wasn’t long before they found their third goal of the day around five minutes later. Despite the success of the Jumbos’ offensive players, Cards goalie Wood remained strong and blocked 9 of 12 shots-on-goal.

The Dirty Birds refused to get stomped out and worked to close the gap. At the 66:27 mark, Tierney Behles ’18 took a pass from Erica Horowitz ’20 to score her first goal of the season. Unfortunately, the game did not mirror the comeback Cardinal football made last Saturday against the same school. While the Red and Black fought until the very end, the final scoreboard read 3-1.

This Saturday, Sept. 30, the team will return to the field, this time in upstate New York to face off against No. 9 Hamilton, to hopefully snatch their first conference win.