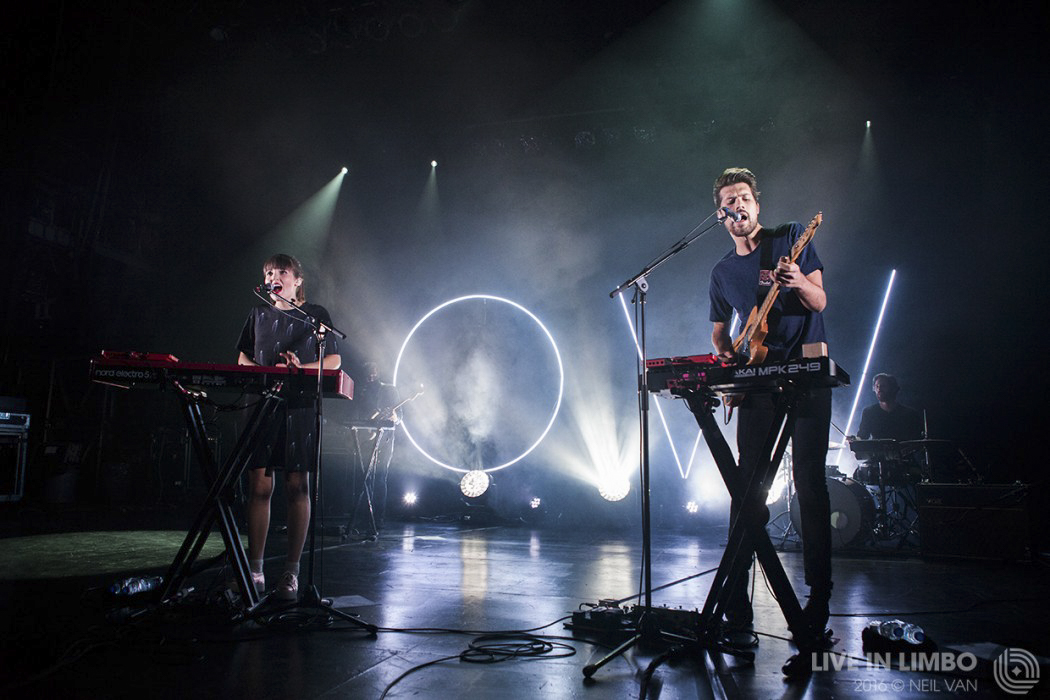 This weekend, New Haven was treated to a performance full of relatable lyrics and an array of lights from British indie pop band Oh Wonder. The duo, which consists of Josephine Vander Gucht and Anthony West, brought its infectious sounds to an intimate crowd at College Street Music Hall for its Connecticut stop on its Ultra Life World Tour, named after its eponymous second studio album. The two performers showcased uplifting tracks and included a speech from Gucht about following one’s dreams no matter what the future has in store. This rendered the show a heartwarming presentation of Oh Wonder’s sophomore album.

Gucht and West began their career together by creating a song once a month for a year in 2014. Writing, producing, and mixing everything on their own, the fourteen songs they created culminated in their self-titled debut album, which has since sold over 500,000 copies worldwide. Since then, the pair has gone on international tours, as well as opened for Halsey during her 2016 Badlands Tour.

The opening act was Jaymes Young, a Seattle-based singer who kicked off the evening with an explanation of how tired he was after having played five shows recently. He provided an amusing set full of a mix of indie pop and electronic music from his debut album, Feel Something, which included his most popular song, “I’ll Be Good.” Young had a relaxed stage presence, performing songs that made you sway back and forth while basking in feelings of nostalgia.

Once Oh Wonder took the stage, the crowd could not contain its excitement. The band opened up with its latest single, “High on Humans,” a song about the need for interacting with strangers in order to form new relationships. Gucht’s enchanting smile added a lightheartedness as she played keys, while Anthony alternated between electric guitar riffs and some impressive dance moves.

The following song, “Without You,” communicated the feelings of loneliness one gets when their lover hasn’t come home yet. Written for the duo’s debut album and heavily influenced by Frank Ocean, the song struck a chord with audience members, who sang along wholeheartedly.

Later on, the group performed their breakout hit, “Lose It,” a song about being free from criticism and dancing as you please. Driven by a piano, calm melodies, and captivating vocals from both members, “Lose It” features a bare-bones sound that draws listeners into its whimsical message.

In “Heart Strings,” Oh Wonder blends an upbeat tempo with lyrics that speak of heartbreak and questioning if someone is ever enough for their relationship. Electric keyboard and drums create a bouncy rhythm. During the performance, Gucht’s brother made a guest appearance onstage to play the saxophone portion of the song, adding a soulful movement to the performance.

The concert ended with “Ultralight,” the album’s title track, which pulls dancehall threads into the group’s signature indie pop sound. When fans demanded an encore, soon after, Oh Wonder returned onstage to end the show with an empowering performance of its song “Drive.”

“I am not a huge fan of indie pop, but [Oh Wonder’s] stage presence and their crazy lighting enhanced the experience,” said Matt Grimaldi ’21, who also attended the concert.

Jace Arouet ’21 found the songs to be catchy, but he found their singing range limited, which caused little variety between songs. However, he believes their stage presence and charisma balanced out the negatives.

“You could tell they put their hearts into it,” said Sam Meagher ’21. “The music is relatively soft, but they fueled it with feeling, moving with it so it would move you too. They made you experience it in your whole body.”

Oh Wonder will continue its tour throughout the United States and the world, ending in Tel Aviv on December 16th.