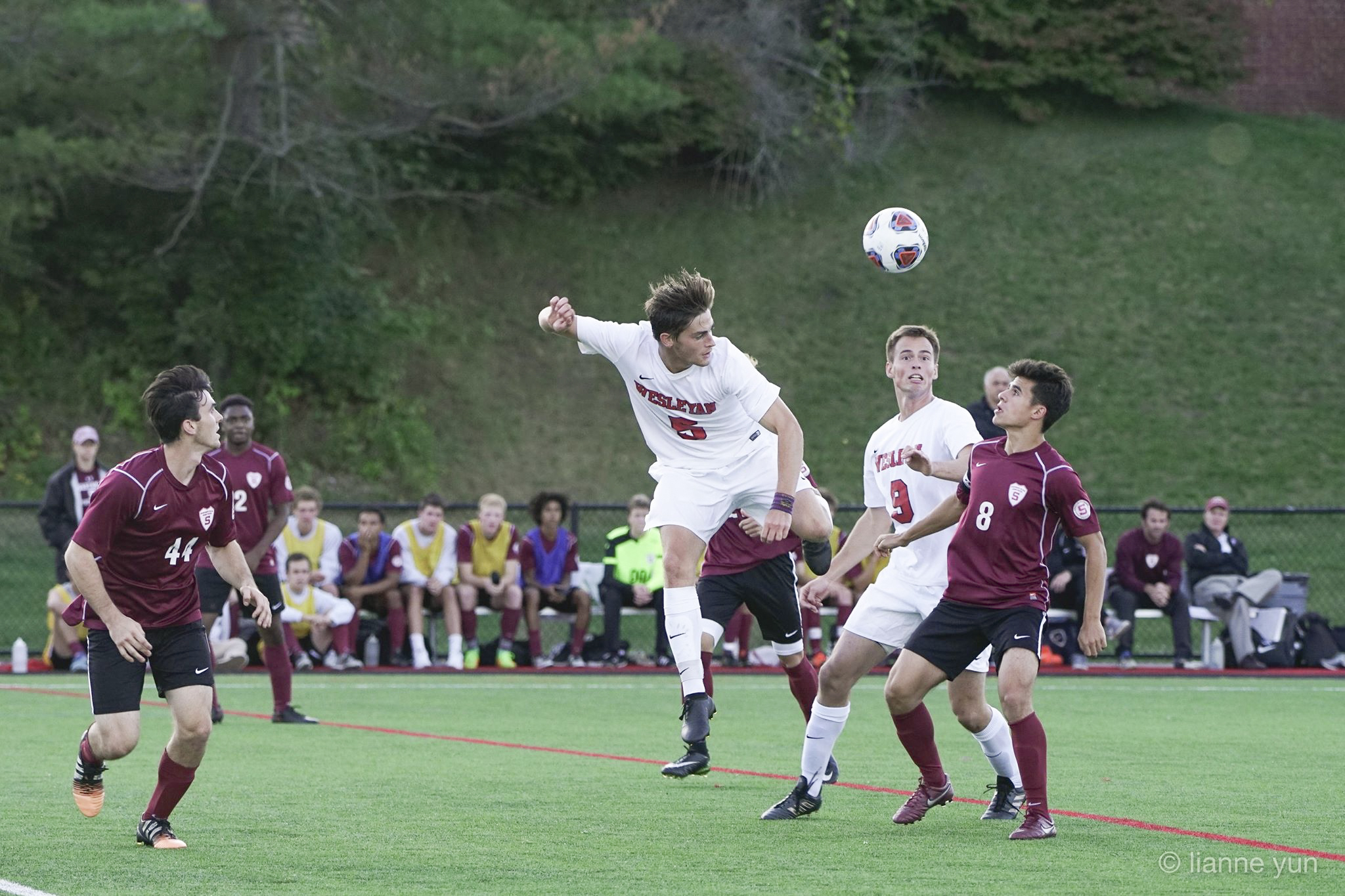 The Wesleyan men’s soccer team has gotten off to a fast start this year, winning five of their first six games. Unfortunately, the same cannot be said for the Argus’ men’s soccer coverage. But just as Barcelona came back from a five-goal deficit in the Champions League last year, so can this beat reporter and the sports section return from a mildly slow start to this fall season’s coverage.

Anyway, the Cards have handled their non-conference schedule with ease, defeating Worcester Polytechnic Institute, Swarthmore College, Manhattanville College, and Vassar College. In the conference, the Red and Black sustained a defeat away in the far reaches of Maine against Bowdoin but rebounded nicely to take down Bates at home in the friendly confines of Jackson Field. The team was excited that their home advantage helped their winning goals come to fruition.

“We’ve done very well out of conference and got our first NESCAC win this past Saturday against Bates,” said sophomore Trevor Devanny. “That first NESCAC win is always said to be the hardest so we hope to keep that trend going.”

The game was hard fought until the bitter end. The Dirty Birds and the Bobcats went back and forth in the first half, with Wesleyan managing to pull ahead 2-1 at the end of the half. The game was quickly equalized, however, in the 55th minute and would remain that way for half an hour until first-year attacker Mauricio Bailleres tallied the first goal of his career for the Cardinals. Soon after, Komar Martinez-Paiz ’19 put the game away with another goal in the 90th minute. Though the final score was close on paper, the Red Birds dominated much of the possession battle. The Cards outshot the Bobcats 22-9, with a shots-on-goal advantage of 13-4. Additionally, the team attempted 13 corners to Bates’ lonely one. There’s no doubt that the home win was a satisfying one for coach Geoff Wheeler, who enters his 19th year at the helm.

“You always got to protect your house,” said Wheeler. “Playing in front of your fans and your familiar area is something you got to count on and take a lot of pride in. These guys are doing a great job of that.”

The Red Birds are excited to build upon this victory and will certainly be able to grow from it as the season continues with some tougher conference games. 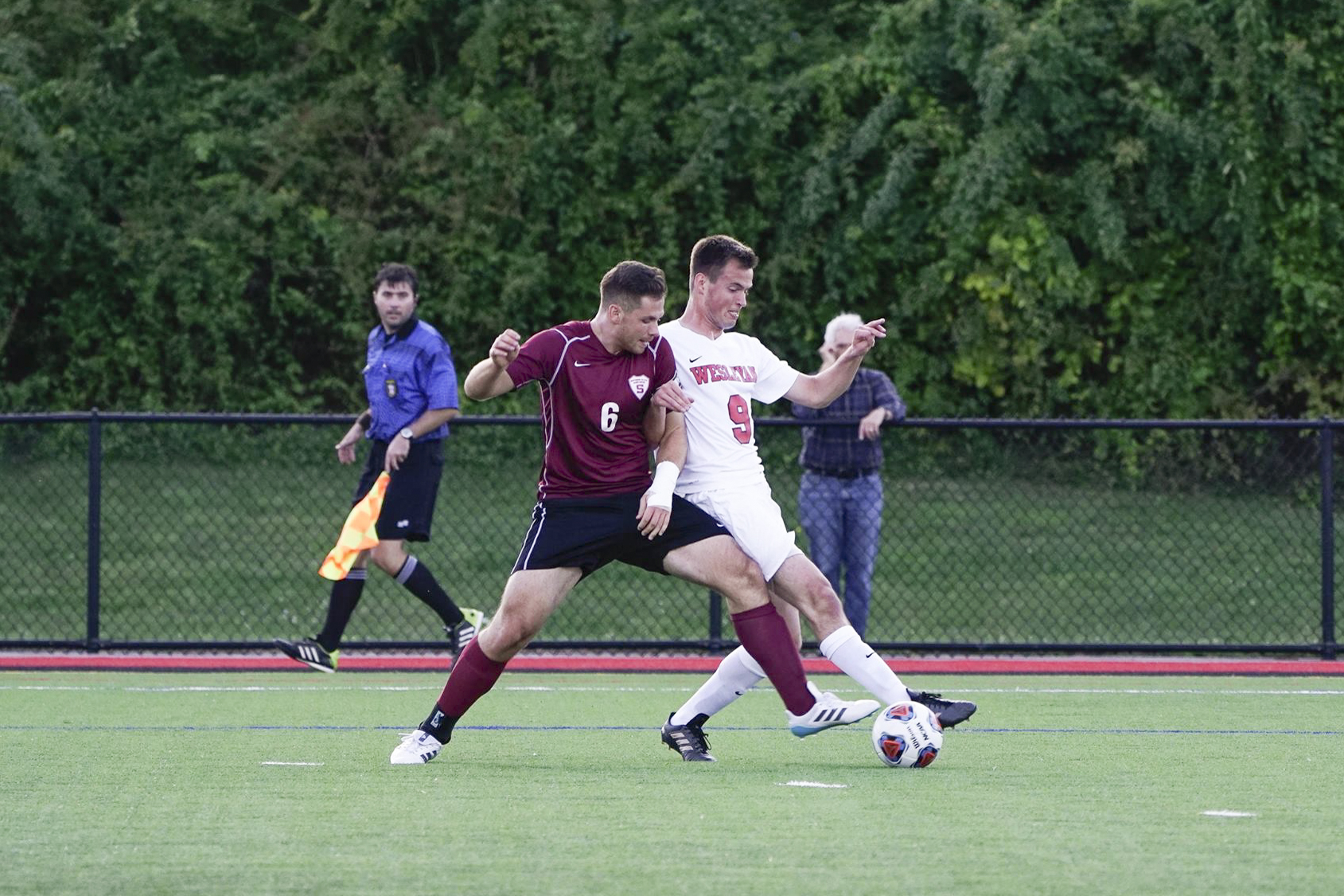 “I am really proud of the guys battling through under a little adversity and some frustration because we thought that we had the game in control, and suddenly we look up and it [was] tied,” Wheeler said. “It was a great way to finish with a late goal that reflected the game itself.”

The team has been individually led by Martinez-Paiz, who has scored two goals and assisted on two others. Goalie Brian Harnett ’18 has also been a standout, having notched four wins already this season. However, like most of our modest NESCAC athletes here, the team comes first. When asked about goals for the season, Devanny focused solely on team objectives.

“Our first goal is always to make the NESCAC playoffs,” Devanny said. “This year we hope to bounce back from our struggles last season and that would start with a playoff berth. After that, we will look to battle it out throughout playoffs and get as far as we can as a group. As they say, anything can happen come playoff time.”

The next leg in fulfilling those objectives is a matchup with Tufts on Tuesday. The Cardinals play the Jumbos at 7:30 p.m. at Citrin field. For those first years who don’t know, that’s the nice turf field behind Freeman Athletic Center.

Devanny and the rest of the team are looking forward to the game.

“We have a motto this year that the next game is always the most important, and our next game just so happens to be Tufts who, as the defending National Champions, are quite the opponent,” he said.“We had a great game against them last year on their turf, and we hope to continue that success here at home this Tuesday.”

Reading that quote, it’s safe to say that the Cards will have their hands full. However, with the comeback that the football team completed on Saturday, I’d say it’s Tufts that should be worried about making a visit to THE Wesleyan University, home of the Dirty Birds.