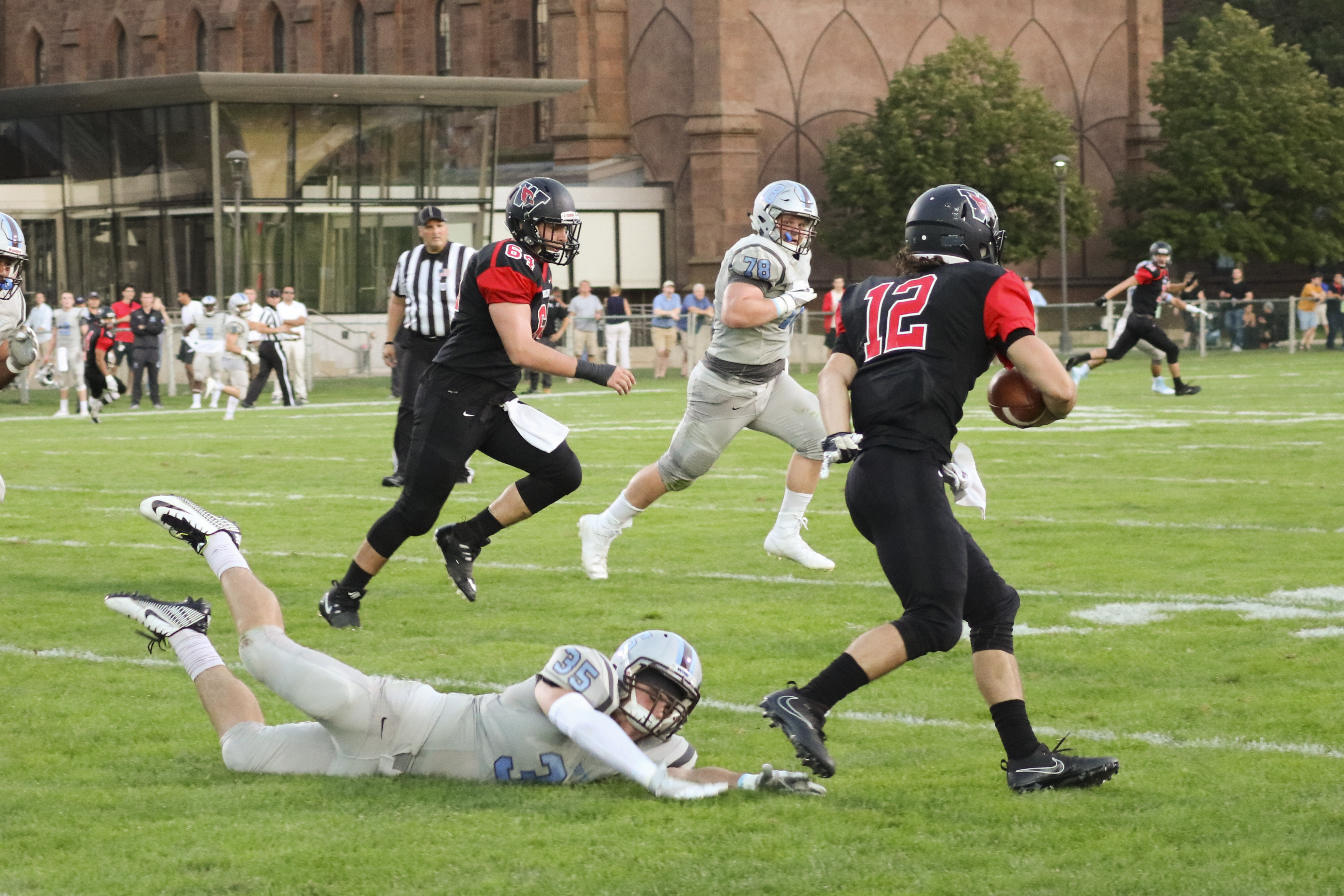 Despite offensive struggles in the first half, the Cardinals were able to pull off a miraculous comeback in the final minute against a stout Tufts defense that restrained the Red and Black for much of the game. Once again, Mark Piccirillo ’19 was the center of Cards’ offense as both the passing and rushing leader for the team this week. On defense, Grant Williams ’19 and captain Shayne Kaminski ’18 were standout players, with Williams notching one and a half sacks and Kaminski sealing the win with an interception in overtime.

The first quarter was difficult for the Cardinals, as they suffered a blocked field goal on the first drive of the game and only reached Tufts’ red zone once. The problems continued for the Dirty Birds, as Tufts was able to march down the field on the ensuing drive and score a touchdown; Piccirillo threw his only pick of the game on the subsequent drive. However, the Cardinals’ defense was able to restrain Tufts for the rest of the first quarter, holding them to just 83 yards between their next two offensive drives, which ended in a failed fourth down conversion and an interception by Ben Thaw ’20.

The second quarter was again defined by defensive success for both teams, with each side only scoring three points; Tufts scored a field goal after being stopped at the 6-yard line. Nearly every drive ended with a punt, except for Tufts’ aforementioned field goal and an unfortunate fumble by Piccirillo, who was attempting to convert a fourth and long. Despite the offensive explosiveness that the Cards flashed in the first quarter, they did not gain more than 60 yards during the entire second, and much of that yardage was generated through scrambles by Piccirillo and would have been difficult to sustain throughout the quarter, let alone the entire game. 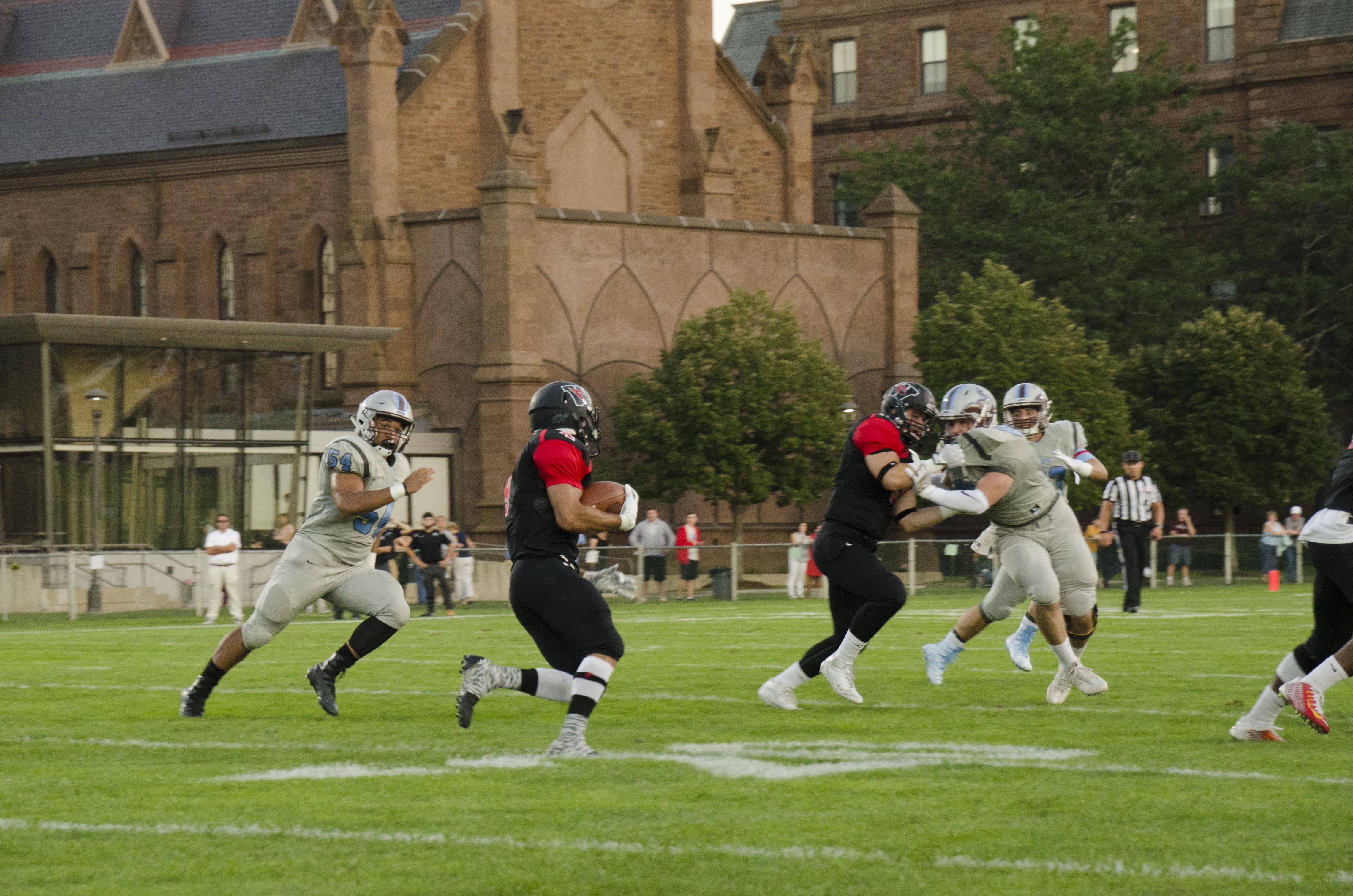 The Red Birds started the third quarter off well, forcing Tufts to a three and out on their opening drive. Following that defensive stop, the Cards were able to immediately get on the board with a field goal on their first drive of the half. Even after a punt on third down by Piccirillo, the Wesleyan defense was able to launch a goal-line stand after a series of Tufts penalties that negated a touchdown and lost them valuable yards. But neither team was able to capitalize on the other’s mistakes and mostly resorted to gaining tough yards on the ground; a total of three yards were gained throughout the entire quarter through the air. But despite Tufts’ lead, it was still a close game that hung in the balance.

However, as soon as the fourth quarter started, the sparks began to fly. Wesleyan gave up a punt return touchdown four plays into the quarter but quickly launched a counter-attack behind Piccirillo’s strong arm to bring the score to 10-17. The Cardinal defense stood strong for the rest of the quarter, not even letting Tufts advance past the Wesleyan 40 yard line.

But after what seemed to be a drive with good potential, Piccirillo once again fumbled on a scramble, and the Dirty Birds did not regain possession until there was only 1:39 left on the clock. The entire crowd sat on the edge of their seats as the Wesleyan offense took the field. The drive looked worryingly unstable at first, as Piccirillo was sacked in back to back plays and dropped the football, which was thankfully recovered by lineman Bryce Jenkins ’21. But after a vital fourth down conversion by wide receiver Mike Breuler ’18 and a series of short passes by Piccirillo, the Cardinals stood just 24 yards away from tying the game. The ball was snapped and Piccirillo read the right side of the field before scrambling to his left and unleashing a bomb to the end zone. Eric Meyreles ’18 ran towards the left pylon as he made the catch of the game, sealing a chance for a comeback for the Cardinals. In overtime, Wesleyan won the coin toss and quickly scored in two plays before giving Tufts a chance to stop the miraculous comeback. However, the Tufts offense stalled and their quarterback, Ryan McDonald, threw a pick, ending the game.

Next week, the Cardinals will be playing at Hamilton, which is expected to be a win for Wesleyan. Hamilton has yet to win a game, lost to Tufts, and have allowed an average of 35 points per game while only scoring 17. The Wesleyan running game will hopefully begin to match their potent passing attack as the team gets in sync for the rest of the season.