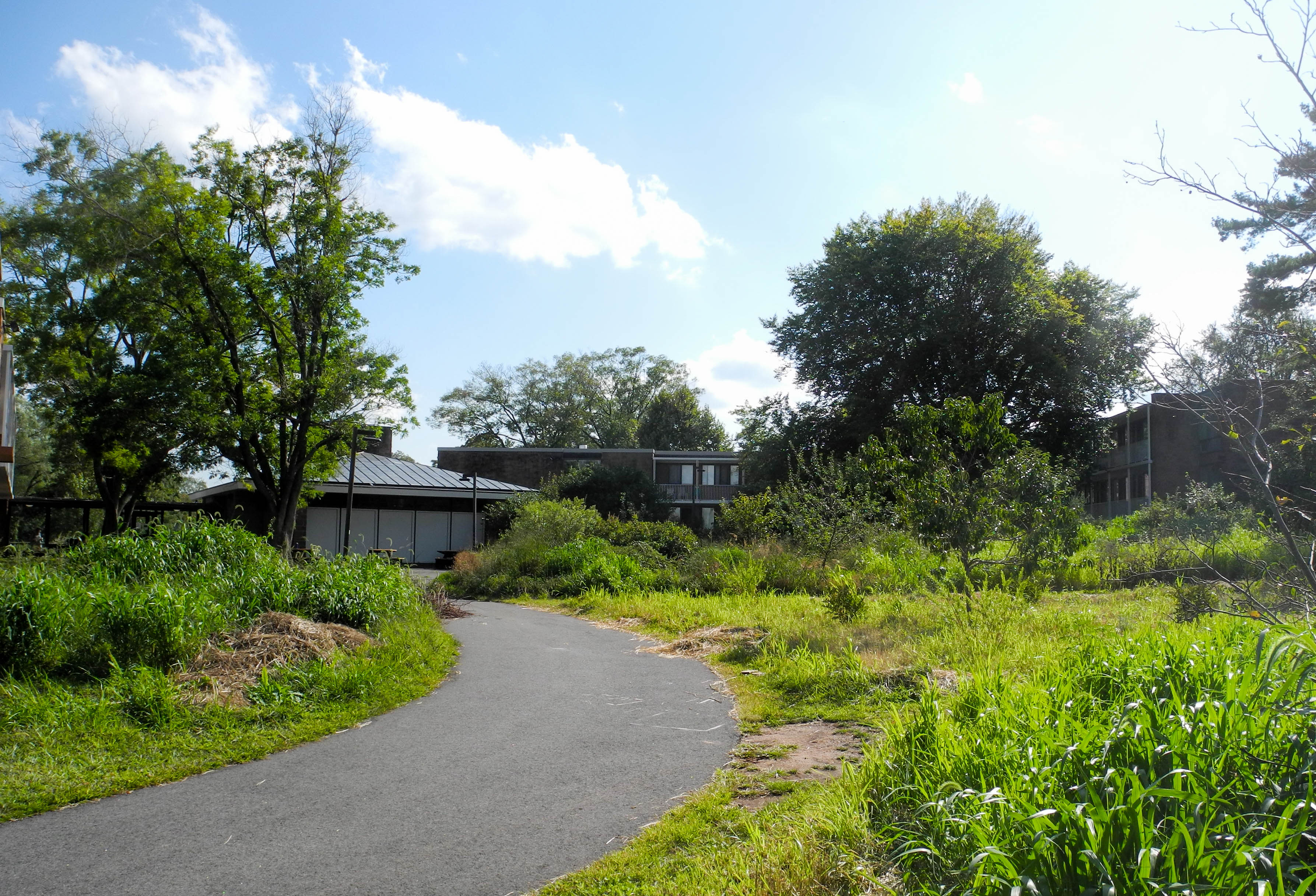 “This is milkweed,” Brooke Burns ’18 indicated while making a sweeping gesture with a handmade scythe, recently purchased from a Maine-based carpenter. “And Monarch caterpillars can only eat it. Most gardens view it as a weed so it’s often taken out, but if milkweed disappears than Monarch butterflies disappear.”

“We didn’t plant it there,” Tony Strack ’18 continued. “Birds brought it here and we let it grow.”

On Saturday, September 2, while many upperclassmen were returning from their summers away, Burns, Strack, and Matthew Chun ’18 were tending to the West College (WestCo) permaculture, a sanctuary whose overgrown grasses appear in stark contrast to the clean-cut landscaping of neighboring Andrus Field.

“You can build a seating area for under $10 and have it be more beautiful than those new black and orange tables they’re putting up,” Burns pointed from the group’s handmade patio, aptly named The Saloon, toward the University’s new picnic tables by WesShop. “Imagine how much that cost versus this one that’s sitting here.”

The WILD (Working for Intelligent Landscape Design) Wes initiative began in spring 2010 with a petition that collected 800 signatures from faculty, students, and staff, according to the group’s website. The Green Building Committee, Physical Plant, and the President’s Office signed off on the project soon after, and construction began that summer.

To unaware visitors, and even some of the University’s more seasoned members, the site might look like an eyesore.

“A lot of people still think of it as just this random thing in the middle of WestCo,” Chun said.

However, the group made a case for the importance of permaculture—their philosophical guide in cultivating the land—a term coined and conceived by Bill Mollison and David Holmgren in the late 1970s.

“Permaculture stands for ‘permanent agriculture’ or ‘permanent culture,’” Burns said.  “It’s a different way of looking at cultivating land, using land to work both for the land itself and humans.”

“As far as we know, it is the only student-run permaculture site in the country,” Burns added. “This is a space that’s truly about experimenting, with enough research of course, but it’s completely up to our discretion. It’s just the three of us now on about an acre of land.”

WILD Wes uses a wide range of agricultural practices relating to both the positionality of plants and their chemical qualities, such as hot composting and setting up tree guilds for crops that require shade. As the group’s full-time workers are set to graduate this spring, though, it remains unclear who will maintain the upkeep.

“I’m also a student and have work-study jobs,” Strack said, concerning the difficulties maintaining the field and recruiting new workers. “It’s hard to talk to faculty when we don’t have a group support network.”

While Strack, Burns, and Chun were paid for their time on the site this summer, they’re in talks with the Green Fund to count hours during the semester to free up time for a much-needed head start in the recruitment process. Burns said that even with that funding, they still need promotional support from the administration.

“The funding will ultimately mean nothing if the University is unwilling to support us on their websites or in terms of signage,” Burns said. “It’s difficult to get recruitment if nobody knows what this place is. Tony’s been trying to get signs for three years now.”

This is not to say the group hasn’t had any outside help. One of their longtime administrative supporters, Sustainability Director Jennifer Kleindienst, offered comment to The Argus.

“There’s been some pushback from time to time because the aesthetics of the site aren’t what everyone considers beautiful,” Kleindienst wrote in an email. “I personally love to walk by and hear birds and insects buzzing—you don’t hear that most places on campus.”

Kleindienst also made note of the group’s recruitment struggles as a long term issue.

“This has been an ongoing challenge almost since WILD Wes’ founding,” she wrote. “The Green Fund accepts applications for funding but doesn’t get involved in individual groups or recruitment.  I would love to find a year-round sustainable funding source for WILD Wes, but haven’t had any luck yet.”

Recruitment hasn’t been their only obstacle. Their efforts to maintain a partner site near the Butterfields have been met with pushback from Physical Plant.

“We had a whole polyculture site on the terraces going to [Summerfields],” Burns said.

“It looked like what I thought was pretty contained,” Strack chimed in. “One day, we were walking to work in the summer and all of it except for the plants that were overgrown were weed-whacked. Usually [Physical Plant] goes through steps like emailing us … They destroyed hundreds of dollars.”

“We recently found out that they completely took it over and put in flower beds and standard Physical Plant landscaping,” Burns said. “They took back a site that they thought was unsightly.”

As the group finished offering a tour of the site, they discussed hopes.

“Our goal this year is to let people know what WILD Wes is,” Chun said, speaking to the research strategy they have planned for the winter. “A lot of our research is geared toward learning material so that we can pique interest and have resources available for students to learn about site-specific aspects of permaculture, and permaculture more generally.”

Burns also shared her hopes for the future of WILD Wes.

“We want to have WILD Wes institutionalized,” Burns said. “Like how [Long Lane Farm] is institutionalized. In order for it to survive, we need that because Physical Plant can just take it back. It very easily could become completely wild again and if no one cares about it, they could mow it all down. Years and years of work could be erased.”

Emmet Teran can be reached at eteran@wesleyan.edu or on twitter @ETerannosaurus