Students returning to the University this fall will notice two major changes: 16 brand-new tennis courts, and the campus bookstore’s move to Main Street. Both of these projects work to further integrate the University with the Middletown community, which is a long-standing goal of Michael Roth ’78’s administration. While the new tennis facilities proved to be a generally seamless process, the closing of the old Broad Street Books location and the opening of the new R.J. Julia Bookstore has been rife with controversy. 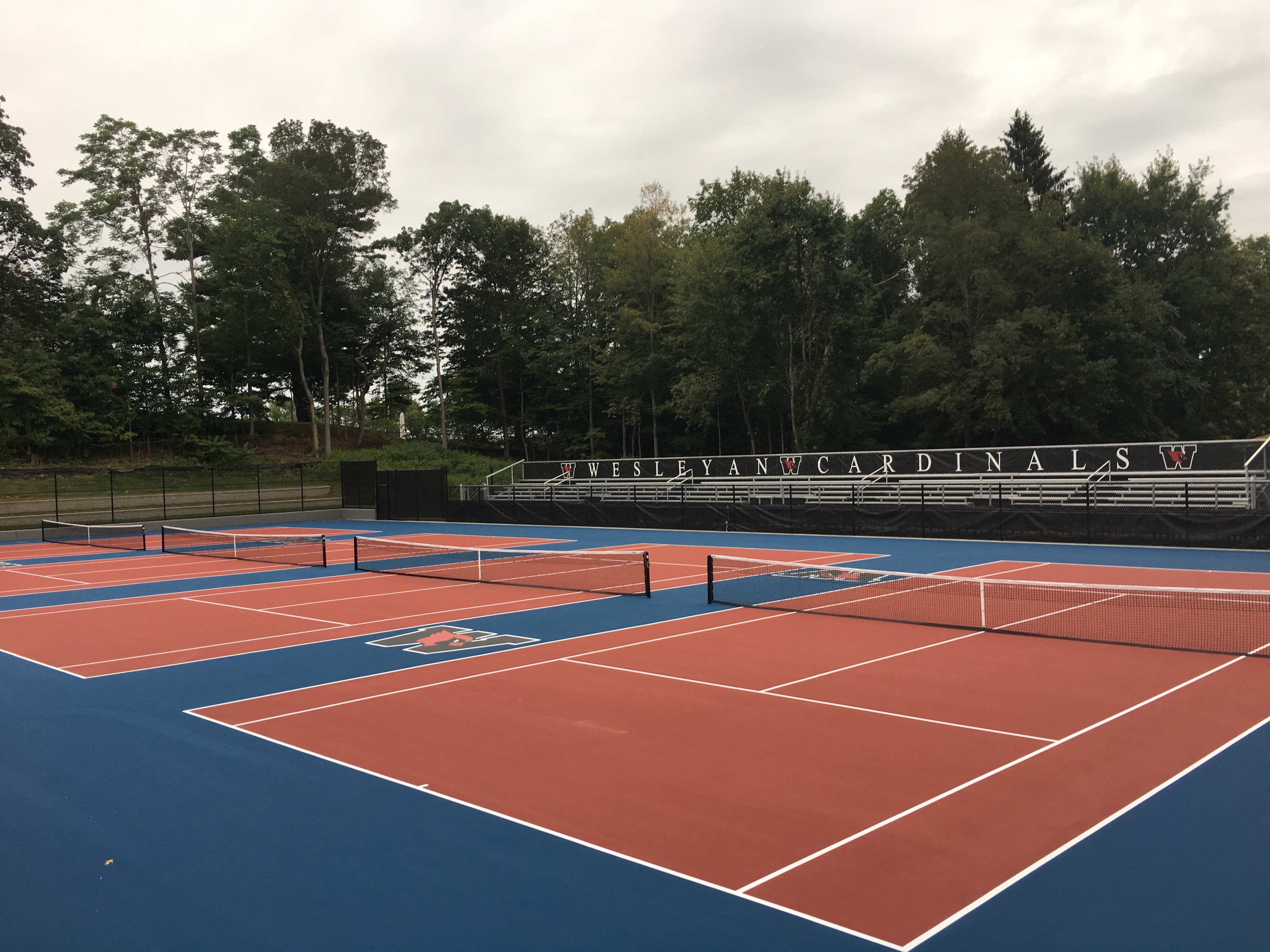 Planning for the new tennis courts began as early as June 2016 when the University asked the City of Middletown’s Common Council for $750,000 to expand its tennis facilities and construct 16 state-of-the-art tennis courts for both University and public use. At that time, the University’s eight southern courts were usable but in need of resurfacing, while the eight northern courts needed a complete replacement. New fencing, bleachers, and windscreens were planned in addition to this surface work.

While no fixed deadline was ever set for completion, the tentative goal was for the new facilities to be ready by the start of this fall semester. Project Manager Alan Rubacha achieved this with ease. Cardinal logos were painted on last week as a finishing touch.

The tennis team’s Head Coach Michael Fried looks forward to how the new facility will attract a greater audience for matches as well as allow the teams to better feel the “home” of a home-court advantage.

“Everybody feels it’s great to have a facility that feels like home, much more so than it has in the past,” Fried said. “And the idea of being able to get more friends and family and students out to matches at these facilities is exciting for everyone.”

Fried is already searching for ways to use the courts as a means for University tennis to help build ties with Middletown.

“It’s really good to be able to enter into a more substantial partnership with Middletown and to have access to not only some brand-new courts for our tennis program at Wesleyan but to have more of a presence and an integration-level facility with the City of Middletown,” Fried said.

An early example of this town-to-University collaboration is the plan for University teams to start hosting training events for the local community.

While the final numbers for the project’s cost are still being processed, the courts will come in at or below the initial $1.5 million budget, according to University Athletic Director Mike Whalen. Whalen praised the ongoing efforts of University Relations to raise $750,000 for the school to pay its half of the courts.

“It is important to point out that Barbara-Jan Wilson and her staff in University Relations have been doing a fantastic job fundraising for this project,” Whalen said in an email to the Argus. “Our goal is that all of the money used for the new courts will come from donors.”

For their $750,000 goal, the City of Middletown will receive a 15-year lease on eight of the 16 courts. The facilities will also become the permanent home courts for the Middletown High School tennis team.

While the city enjoys expanding its recreational areas, it also anticipates increased economic activity resulting from the project. With 16 NESCAC-regulation courts, Fried will now be able to host multi-team tournaments and championships, which is something Wesleyan has not been able to do in the past. The influx of players is expected to bring new customers to Middletown’s hotels and restaurants. 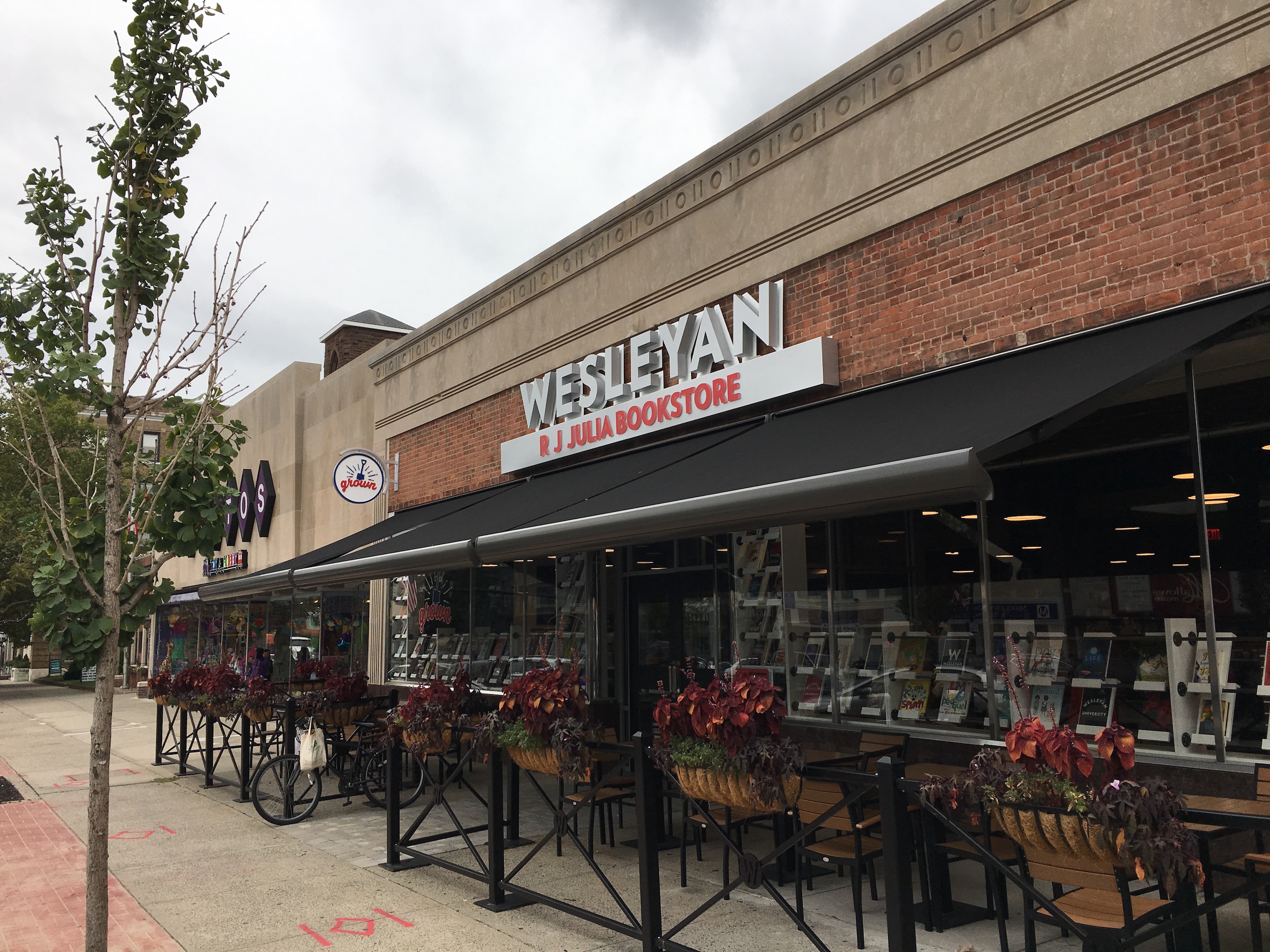 Meanwhile, on Main Street, the controversy over R.J. Julia broke out primarily over complaints from students in the United Students Labor Advocacy Coalition (USLAC) who accused R.J. Julia and the University of mistreating local workers. The students emphasized how this contradicted the intention to unite campus and Middletown.

Discontent began with the project’s announcement on Nov. 30, which came as sudden news to the community, including the current Broad Street employees who learned they would no longer have their jobs in the spring.

It would not be until the next semester—when reports came out that R.J. Julia was not giving each old employee a job and was allegedly engaging in unfair hiring practices—that students began to protest.

After receiving complaints from workers, USLAC organized an effort to ensure that all employees at Broad Street books would be given jobs at the new store for equal or greater wages. Tensions reached their apex at a meeting between student, administrative, and R.J. Julia representatives on April 24, when students questioned whether laying off employees would promote Middletown integration.

“I’m unsure what that would mean if it’s supposed to be a community bookstore, and how that community can possibly not include the workers who are currently there who are fostering the community that already exists there,” Sophie Sokolov ’18 said to R.J. Julia founder and owner, Roxanne Coady, as quoted in an Argus article last semester.

Disregarding these concerns, management at the new store has been highlighting all the benefits it will bring to the Middletown community, especially as a new social space. Residents will now be able to attend readings, hang out, read late in the evening, and enjoy quick, nutritious food at its restaurant: grown. (The store is open 9 a.m.–9 p.m., except on Sundays, when it’s open until 6 p.m.)

“I’m very excited that grown is here to contribute to our community as well as to Wesleyan,” Atia Heart, one of grown’s managers and a Middletown native, said. “I think it’s really important for students to come and experience the Middletown downtown because it has so much to offer, especially with all this redevelopment going on.”

This larger gentrification effort includes a huge new apartment building being constructed next to MiddleOak Corporate Center as well as several recently opened stores and restaurants.

Heart also emphasized the downtown location as ideal for not only drawing students to the city, but also fostering a strong Wesleyan reputation among locals.

“I think that this is the perfect location because it’s easily accessible,” Heart explained. “Everyone’s going to know where it is, and as people are walking by they’ll be drawn in and see all the Wesleyan paraphernalia, like hats and clothes, they’ll be drawn to ask about what it all is and where it came from. And the fact that [grown is] here is a great start for us as well.”

Everyone’s excited, it would seem. Indeed, there have been three separate ceremonies on which the bookstore has celebrated its new location: a ribbon cutting event in October, at the beginning of construction, another ribbon-cutting event in May, for an opening celebration, and finally a “grand-opening” celebration on June 3 for the first author talk.

Heart also addressed how grown was working to make its items more affordable for students by creating an additional “student menu.” Currently, while grown does offer a variety of good, healthy food, their prices are remarkably high. A cup of “American Coffee” (presumably drip) costs an alarming $4, the cheapest entree (falafel) is $14, and sandwiches begin at $15. Breakfast is not much better with the cheapest items being a fruit cup for $6 and avocado toast costing the same. The delightfully named “Almost grown” menu offers some lower prices for lower portions but only for 12-and-unders.

This “student” menu would not be exclusive to University students, or even students for that matter, but offer a set of more affordable options.

As for other campus construction efforts, Olin Library has a new slate roof, better-insulated windows (filled with argon gas) to improve temperature control and sustainability, and new skylights to allow more natural light. Red and Black is set to open within the next week after its renovations are complete. And finally, as Roth announced in a recent email, plans for a new science center have begun.