Dirty Birds Back at It: Fall 2017 Preview

After the beginning of last September, the men’s and women’s soccer teams had decent records. Both teams excelled in out-of-conference matchups: The women’s team owed the first three of their 3-9-3 record to non-NESCAC victories, while the men owed three of their five. However, as the cold and the ’CAC games came in, so did tougher losses. Even in just the Little Three, times have been hard for both teams. The men’s team hasn’t trumped Amherst in the last two years, or Williams for the last five. The women haven’t claimed victory over either school in ten years.

“We’re looking forward to getting back to competing,” Arthur Stueck, the women’s team assistant coach, said. “We’re taking it day by day, focusing on each player’s performance and then coming together and improving as a team.”

Captains Lauren Goetzman ’19, Kinsey Yost ’19, and Meg Hanan ’18 are set for a successful year. Nicole Brodkowitz ’20 and Liz Young ’19 join them: Young was a high scorer her freshman year but was unfortunately injured for most of last season.

As both teams welcomed many new faces last year (seven male and nine female first-years), there’s no telling what may happen after a long year of training and practice.

“I’m really looking forward to getting after it with this great group of teammates and competitor,” said Griffin Godsick ’20, a returning men’s team member. “All of us just want to push each other to be the best that we can be. We want to take it one game at a time, and if we maximize our efficiency in every facet of the game, then we will get the results we are after.”

Although they made strides to improve last fall, the men’s and women’s cross country team still fell short by the end of the season. After the men’s team placed 10th of 11th in the NESCAC Championship and 12th of 56 in the NCAA New England Regional Championship, former team leader Will Dudek ’17 went on to race at the NCAA Championship, ending his Wesleyan cross-country career with a bang.

The women’s team jumped from ninth to seventh in the NESCAC rankings and advanced to the NCAA New England Regional Championship with a 10th-place finish out of 59 teams. Although many of the strong performers from last season have said their goodbyes to Wesleyan, the team, having put in many miles this summer, is prepared for the months ahead.

“I’d say that our team put in an exceptional summer of training, and I’m looking forward to seeing everyone improve over the course of the season,” said Sara Pinsonault, a returning sophomore. “We all put in the work, and we’re all ready to see the results. Even though we lost some key runners, we still have a strong group of runners at the head of the pack and a great class of frosh phenoms, so our goals going into NESCACs and Regionals would be to place higher than we did last year, which I think we can do if we race our butts off and stay injury free throughout the season.”

Although volleyball was the school’s youngest team last year, age did not set any barriers when it came to smashing former records. Now in his third year, Coach Ben Somera’s recruiting skills proved savvy as former first-years Nicole Hilton ’20 and Kaira Muraoka-Robertson ’20 were especially vicious on the court, leading the team in kills and assists. Further contributing to the team’s success were sophomores Gabby Bennett, Audrey Konow, Olivia Guidotti, Stasie Litinsky, and Mia Hogan.

After moving from a lowly 5-15 2015 record to a 15-8 record last fall, these Cardinals look to continue improving this season, especially with another year of experience on their backs.

Despite shortcomings last April at the Wesleyan Invite, Williams’ Spring Invitational, and the Little Three Championship, the golf team has high hopes for their fall season and the 2017-18 year.

“We hope to qualify for the NESCAC championships in the spring by being one of the top four teams in the fall,” said Coach Jeff Gilarde.

Leading the team this fall is captain Zachary Lambros ’17, a consistent and high-achieving player who scored the team’s lowest during last spring’s tournaments.

“This season I’m really looking forward to the comfort level I’ll have out on the ‘circuit,’” Lambros said. “I can now just focus on my game and trust my reads…my personal goal is to consistently be in the Top 10. I’m confident in my game right now and I know that I can play at that level, I just need to go out there and do it every week. Team-wise I think we’re going in a great direction in that we’re returning the majority of the team, so there should be a new factor of experience. And I think our goals are always the same as a team, which are to qualify for the ’CACs and, of course, beat Williams.”

Both the men’s and women’s tennis teams swung big last spring, retaining top-ten national rankings for most of the season. Particularly notable is their feat of beating out previously No. 1 ranked teams, the men championing over Middlebury and the women defeating Emory. After these victories, the men ranked fifth in the nation and the women seventh.

Individually, star players made impressive moves in further tournaments. These players are definitely something to look out for this season. Leading the charge is senior Eudice Chong, All-American and three-time defending NCAA champion, and NCAA doubles champion partner, Victoria Yu ’19, who is also a singles semifinalist and two-time All-American. For the men, two-time All-American Steven Chen ’18 appears ready to lead the Red Birds to more successes over top-ranked teams.

Coach Michael Fried, who is responsible for both teams, also looks forward to welcoming the class of 2021. Quite a few of them will be joining the team this year.

“We’re hoping to use the fall as an opportunity to introduce the freshmen to our team culture and camaraderie; to set the bar for our on and off-court training expectations and commitment; to get in a groove in balancing our tennis with our academics; and to get some good match experience in three tournaments for each team,” he said.

The field hockey team played through a rough season last fall, finishing with a 2-13 record and zero conference wins. The team has struggled for a few years now, unable to obtain a winning record since 2011, when they just went over .500. However, the 2017 team retains many of its former players, including star attacker Cici Frattasio ’18, who was out for a third of the 2016 season with an injury. Incoming Birds should look to these veterans as sources of inspiration and determination for the upcoming field hockey season.

The men’s and women’s rowing teams ended last season with somewhat disappointing performances back in May after having strong performances in the fall and early spring. After placing highly in the New England Rowing Championships, the teams traveled to the ECAC National Invitational Rowing Championships, where the men placed seventh out of 18 teams, and the women took 11th out of 21. The women’s rowing team kept on competing, moving not only to the NCAA Championships but also the NCAA Championship Grand Final. While they placed sixth, they finished a strong year of first-place finishes in fall regattas, a Williams defeat, and No. 1 and No. 2 national rankings.

As the new season approaches, both of the crew coaches are ready to rock the boat.

“I am very excited for both the quality and quantity of the student athletes on the team,” men’s coach Phil Carney said. “With four athletes graduating from last year’s team, we have returned the core of a hard working and successful group from last year…. In addition, we have one of our best freshman recruiting classes, so the inner squad competition on the team will be at an extremely high level. Look for strong challenges from newcomers and lower boat guys from last year as the depth of the team should really be outstanding.  Work equals speed, so it will be clear who has spent the summer productively! Personnel will become more clear as we get closer to the races.”

Women’s coach Patrick Tynan will also have some key members gone this fall, many of whom are studying abroad.

“I feel like this group has a real hunger to do what it takes to raise the bar even more, and I’m looking forward to watching the athletes hopefully make some big strides,” he said. “In rowing, you have to [have] everyone fully committed. If someone is not putting the work in it has a direct negative impact on their teammates. Conversely, the harder and smarter one works, the faster her teammates will go.” 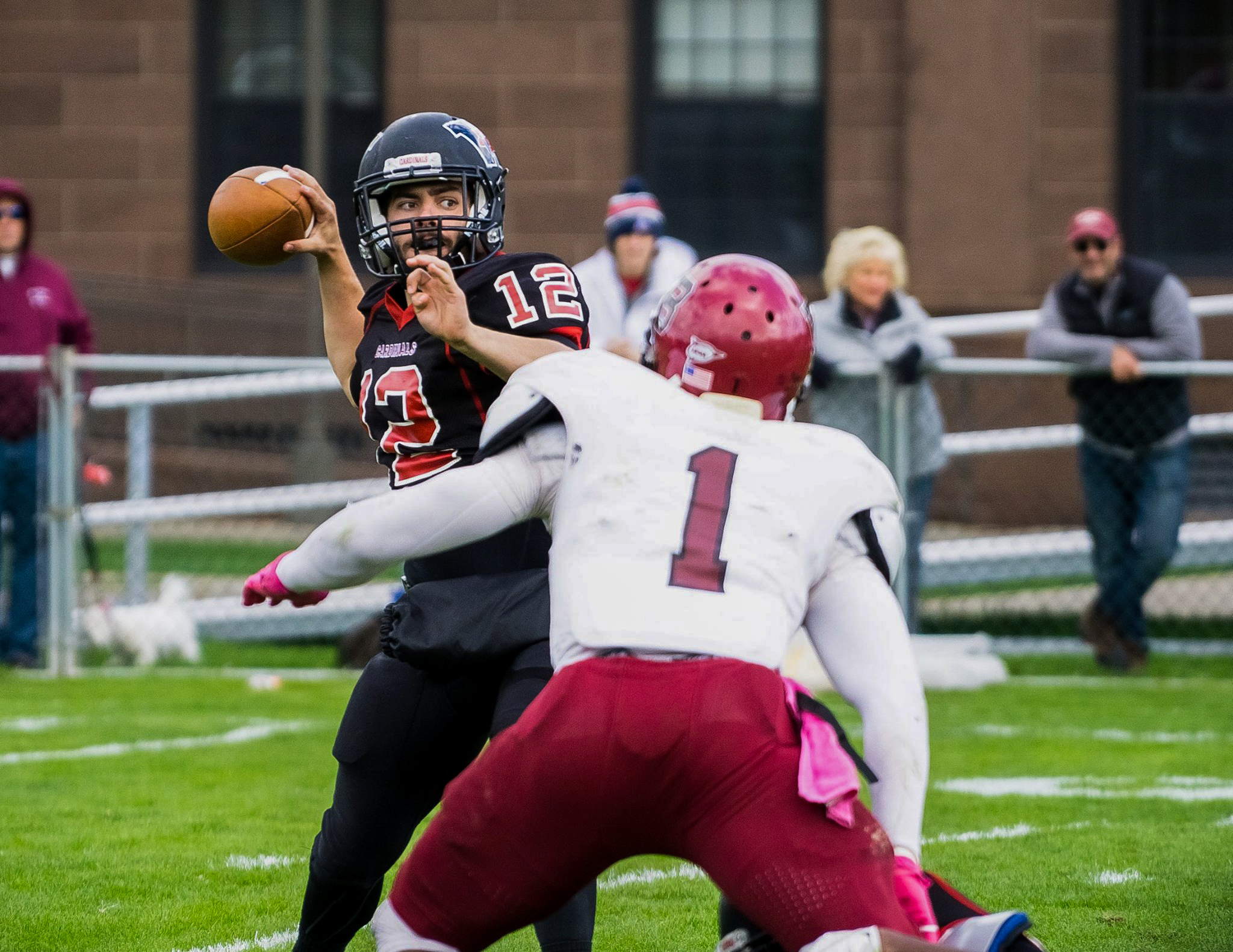 Last year’s winning season was nothing new for the Cardinals; instead, it was part of an ongoing victory celebration that began nearly five years ago. In the recently departed class of 2017’s time at the University, the football team had gone 25-7, claiming the Little Three title twice and sharing the NESCAC crown. Just last year, the team not only defeated Amherst and Williams, but also went on to take third in NESCAC standings, tying with Middlebury. In their six-game win streak of fall 2016, the team outscored its opponents 217-43. Head Coach Dan DiCenzo believes the team will do nothing but continue and build on past success.

“I’m looking forward to a great year,” DiCenzo said. “We want to maintain a strong program so we can hopefully win all of our games this year, taking the Little Three and the NESCAC Championship.”

Many of the team’s star players will return to the field this fall. Quarterback Mark Piccirillo ’19 will join Joe Wilson ’19, Dario Highsmith ’20, and Eric Meyreles ’18 on the offensive front. A strong defense that allowed the fewest points per game and yards per game of all NESCAC defenses last year hopes to continue their formidable force under the leadership of seniors Cole Harris, Shayne Kaminski, and Nate Taylor.