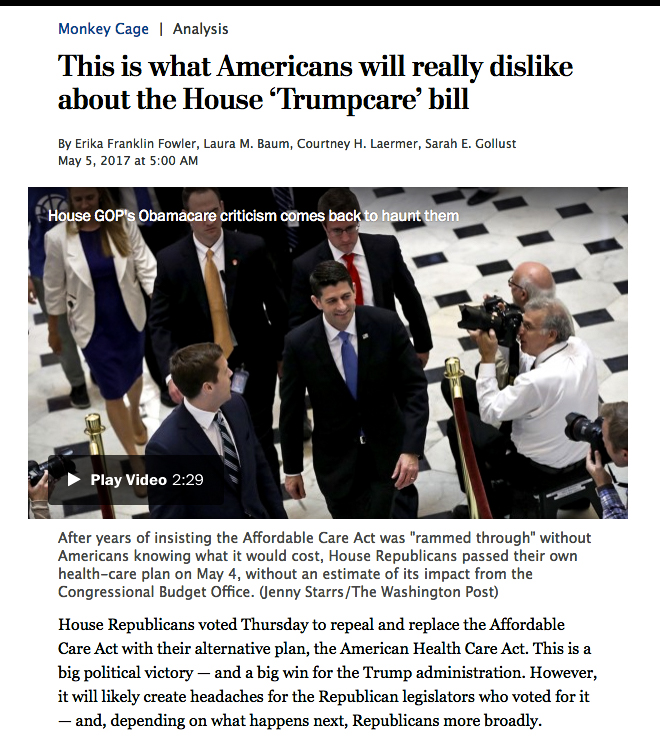 On May 5, researchers working with the Wesleyan Media Project published an article on the Washington Post-affiliated blog, the Monkey Cage, that examines the first step in voting to repeal the Affordable Care Act (ACA) on May 4 and the public perception of its replacement, the Affordable Health Care Act (ACHA). The Monkey Cage features analysis of data pertinent to current events. The article references data collected by Courtney Laermer ’17 for her honors thesis, which examined the effects that the media has on public perceptions of health care reform. Associate Professor of Government Erika Franklin Fowler, Project Manager at the Wesleyan Media Project Laura Baum, and Associate Professor in the Division of Health Policy and Management at the University of Minnesota School of Public Health Sarah Gollust ’01 also contributed to the article.

The article discusses the AHCA’s solution to the ACA’s unpopular individual mandate, which requires that everyone have health insurance or pay an annual fine to the government.

“So far, ‘Trumpcare’ handles this by replacing it with a ‘continuous coverage requirement,’” the article read. “If you let your health insurance coverage lapse for more than 63 days, you would have to pay a 30 percent late-enrollment surcharge on top of the premium for the next year. (The bill passed with two amendments affecting these penalties. The widely debated MacArthur amendment lets states seek waivers to enable insurers to charge higher premiums to people with preexisting conditions who fall into this coverage gap. The late-breaking Upton amendment added Wednesday provides $8 billion in funds to offset some of these higher penalties for waiver states, but most analysts don’t think it’s enough).”

The article highlights the research done by Laermer for her thesis, titled “Repeal and Replace, Rinse and Repeat: The Media Influence on Public Perception of Health Care Reform.”

“From March 10–16, during the debate over the first version of the AHCA, we fielded a survey experiment on a nationally drawn sample of 1,588 Americans,” the article reads. “Participants were asked to read a short news excerpt about both the ACA and the Republican plan to repeal and replace it. We randomly varied the excerpt. Some respondents got only basic information: that the ACA, also known as Obamacare, was passed into law in 2010 and that Republicans in Congress were currently trying to repeal and replace it with the AHCA. Others also learned about the ACA’s individual mandate and the tax penalty for not enrolling. A third group read the same text about the ACA penalty and also read about the AHCA’s proposal to replace the tax penalty with the 30 percent enrollment-gap penalty.”

Laermer elaborated on her thesis and the corresponding research.

“I received a Davenport Grant, which provided me with money so I could fund this survey and I could get a sample size of 15 to 1600,” Laermer said. “The survey was out in the field for one week.”

Laermer’s research found that, although the majority of respondents were familiar with the the tax penalty under of the ACA, significantly less respondents were aware of the AHCA’s enrollment gap penalty.

“By March 2017, people were well aware that the ACA requires nearly all Americans to have health insurance or pay a penalty to the government,” the article said. “In the group that got only basic information about the ACA, nearly three in four correctly identified the tax penalty as part of the ACA. That’s more than knew about any other components, including subsidies for low-income citizens. But only 28 percent knew that the AHCA would penalize enrollment gaps. That’s fewer than knew either that the ACHA would repeal the subsidies; how the law would treat preexisting conditions; or that young adults under 26 could stay on their parents’ insurance.”

Franklin Fowler commented on why only 28 percent of respondents knew about the AHCA’s late-enrollment penalties.

“Health care in our country is complex as are the proposed reforms, and both knowledge and attention are limited,” she said. “News media have to make choices about what they cover, and focusing on changes to pre-existing conditions makes a lot of sense: the ACA guarantee is one of its most popular provisions affecting a large number of Americans. The individual mandate and tax penalty, by contrast, is very unpopular and repealing the government requirement on its face seems less controversial. This logic explains both why news media have focused their attention on other provisions and subsequently why citizens are less informed about the penalty aspect of reform.”

The data shows that knowledge about the AHCA’s late-enrollment penalty led respondents to favor the ACA even though it had penalties of its own.

“Emphasizing the ACA tax penalty has no effect on whether respondents favor the ACA, even when we adjust for key demographics like partisanship and voting for Trump,” the article said. “But telling respondents about the AHCA’s enrollment gap penalty makes them less enthusiastic about the GOP bill. When asked explicitly which they prefer, respondents told about both the ACA’s tax penalty and the AHCA’s enrollment gap penalty are more likely to prefer the ACA.

Laermer commented on the results of her research.

“The results showed that…when respondents received the third condition that talked about the AHCA penalty, they were more likely to report unfavorable opinions about the law,” she said. “For my thesis, I discussed that in two ways. First, I took that at face value to recognize that learning about the 30 percent premium to private insurers as part of the AHCA causes people report more unfavorable opinions. Additionally, I looked at that to say, ‘If this happens with the newly introduced AHCA, I could draw the connection that in 2014, when individuals learned about the fine to the government under the ACA, perhaps this drew unfavorable opinions toward the ACA, also.’”

The March 10 to 16 window in which the survey was conducted saw the release of the Congressional Budget Office’s (CBO) score of the first version of the AHCA. Laermer explained how she accounted for this new information in her research.

“I had to account for people who took the survey before the CBO report came out compared to people who took it after,” she said. “I wanted to evaluate whether the results of the report would change people’s responses. [To do that,] I created an indicator variable to determine who took the survey before and who took it after [the release of the CBO report]. When the article reports that the CBO report may have lowered support for the AHCA even further, this was stating that when we analyzed the data, there were more favorable responses to the AHCA prior to the report compared to after.”

She also spoke about how she went from writing her thesis to developing this article.

“I always knew I wanted to pursue something further with this research, whatever form it may be in,” she said. “On May 2, Erika Fowler, my advisor, reached out to me and said that given the revival of the Republican push for health care reform, we should publish the data from my survey experiment. When I submitted my thesis on April 19, [the topic of health care reform] had died down, as the [voting on the] AHCA was postponed. I thought maybe there would be some more time until there was another push for the AHCA in the House. But surprisingly, or perhaps not surprisingly, it was back on the political agenda in no time. I was very excited that my work would have the opportunity to reach a broader audience.”

Franklin Fowler expressed her pride for Laermer’s work and discussed what she believes could be explored more in future research.

“There is a lot still to be explored,” Fowler said. “So far, we have shown that there was substantial variation in messaging across the country, that news coverage of the first open enrollment period [of the ACA] focused on politics over substance, and that insurance advertising was associated with enrollment uptake. Right now, we are working on several extensions to this work, including analyses of the people and messages featured in insurance advertising to see how the marketing shifted over the last several cycles.”