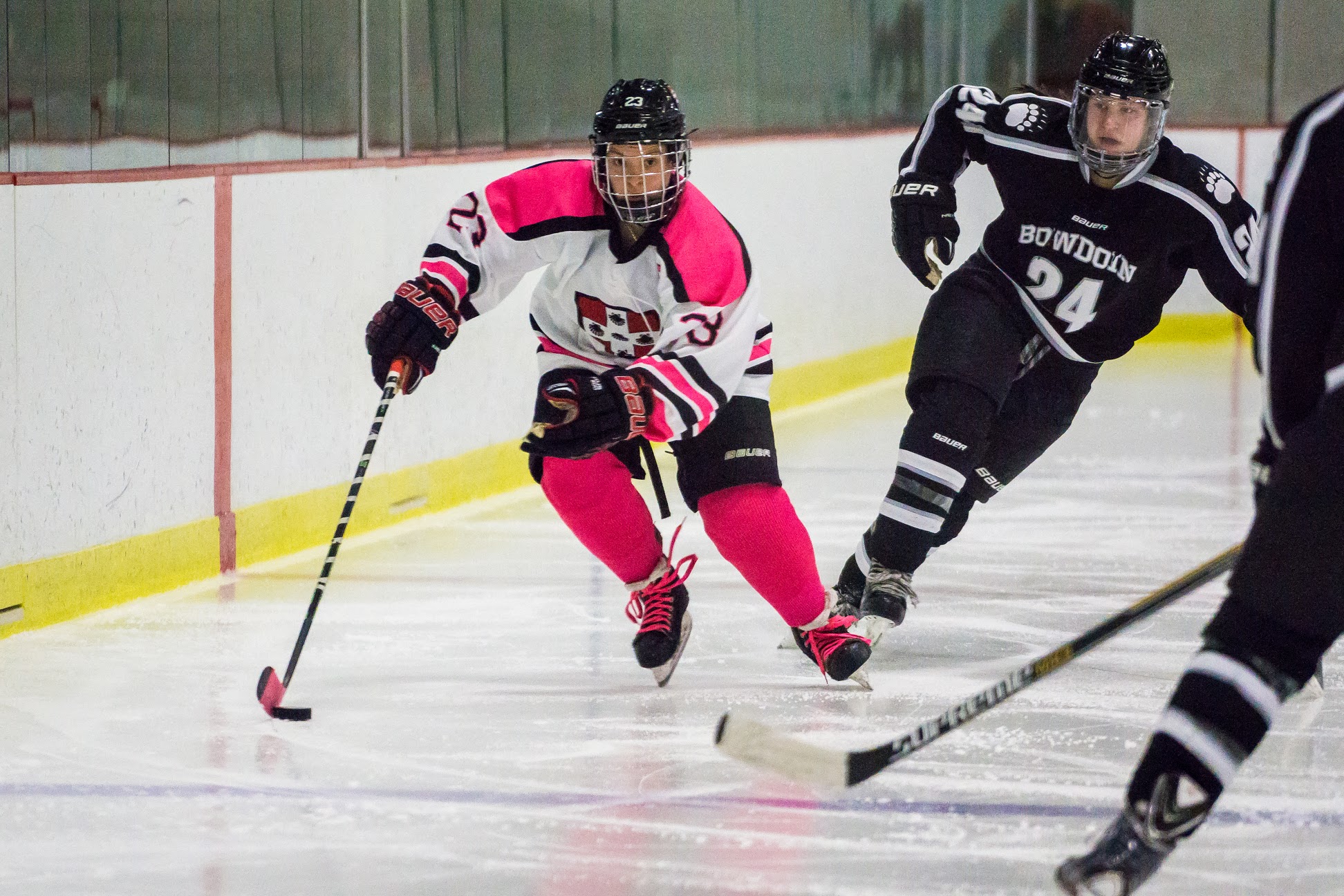 Jess Brennan ’17 is a fierce competitor on the ice, but the hockey star (who also dabbles in rugby) wears many different jerseys. Brennan sat down with The Argus to chat about her short ballet career, her love for her team, and her future career in the Marine Corps.

The Argus: Where are you from?

A: Is being from the south part of the reason that ice really appeals to you?

JB: [Laughs] Not really. I mean, I did ballet when I was, like, three. My parents put me in it, and I hated it. I actually started playing roller hockey because it was on a pamphlet they passed out at the end of the year. I took the ballet one, crumpled it up, put it at the bottom of my bag, and gave my parents the roller hockey one.

A: What did you hate about ballet?

JB: [Laughs] Everything! I did one season of ballet. The main reason was the lady who taught it. I don’t know my left from right, and I remember her being like, “Turn left! Turn left! No, Jessica, Jessica.” I was like, “I hate you; I hate this.”

A: What was the transition from roller hockey to ice hockey like?

JB: I transitioned when I was seven. We have two ice rinks near my house in Florida, which you’d never expect. And my parents signed me up for a season saying, “Let’s try this.” My mom says my first practice ever, I was crying, and I was saying, “I hate this! I want to go back to roller hockey.” And my mom was like, “Too bad. We signed up for an entire season, and you’re going to stick with it.” By the end of the season, I was fine.

A: What position do you play?

A: Is ice hockey a very violent sport?

JB: Noooo. Not really. It’s definitely physical. It’s the physicality of football, the speed of basketball. The best of all sports.

A: I heard you just got a scholar-athlete award.

JB: [Laughs] Me? No, definitely not. No! It might have been Rachel Aronow [’17]. There’s a scholar-athlete dinner where you have to have a 3.2 GPA to go to it, and I’ve just never been to it. It’s a running joke that I singlehandedly bring down the team’s GPA.

A: What do you study?

JB: Earth and Environmental Science. School’s just not my wheelhouse.

A: You also play rugby, right?

JB: Yes! At the end of the season, once I retired, Rachel Savage [’17]—she plays rugby—was like, “Hey, we have four girls. Can you come out and play?” So I came out and just practiced with them and stuff. But I couldn’t make any of the games because I work softball. So there were some conflicts. But it was a great time. If I ever get a chance to join a league later on, I think I will.

A: Is there a lot of tackling in rugby?

A: I heard you’re going into the Marines. What is that like? How did you decide to do this, and what was the process like?

JB: [Laughs] For a while, I really wanted to get out of school and coach hockey and teach geology, but two years ago, I started thinking that I wanted to do something with my life before I settle down and coach hockey. My grandfather was in the navy for 25 years, so I decided to go down to the recruiting office in Middletown. It’s right next to Metro Spirits.

I called the Army first and was like, “Hey, do you guys want to meet? I want to go the officer route.” And I had an appointment with them at zero-eight in the morning. I’m standing outside the door, and it’s all the branches—Navy, Army, Coast Guard, Air Force, Marine Corps. It’s 8:10. These guys are just not going to show up. I pop my head into the Marine Corps and said, “Hey! Army guys aren’t here. I was supposed to have a meeting with them. Want to give me your spiel?” I fell in love. The guys in there were, like, bros. I don’t know. Just cool dudes. I sat down and talked to them, and they got me in contact with the selection office for the Marine Corps. This summer I went to OCS (Officer Candidate School) and I’ll be commissioning in June, which means I’m a legit lieutenant.

JB: I got a boot-camp sort of atmosphere, people yelling in your face and stuff. It’s a lot of running, discipline, the whole nine years. Taking a civilian and getting them acquainted [with] military life. Those 10 weeks, I thought it was fun.

A: Did you get very strong?

A: Did you scrub the floor with a toothbrush?

JB: [Laughs] Not a toothbrush! But you clean—you call your squad base “the house”—every time you leave it and every time you enter it.

A: What appeals to you about the Marines?

JB: As far as Marine Corps goes compared to every other branch, they’re the best of the best. Whenever someone hears “Marines,” it’s the fucking Marine Corps! It’s awesome. I wanted to be a part of something. The Marine Corps is kind of like a hockey team: it’s not about you at all. No matter what, especially as an officer, it’s not about you and it won’t be about you for the rest of your life. The people you’re deployed with, the people you’re training with…by the time I’m 25 years old, I’m going to be in charge of one-hundred-plus Marines. We’re talking 18-year-olds. And their lives, especially if and when I get deployed, are in my hands. That really appealed to me. And the fact that I trust myself to make big decisions. I’d rather myself, a liberal-arts-educated human goes into the Marine Corps and tries to make a difference than someone else who may not be as intelligent or have as good intentions as me.

A: So back to sports: how often do you have to do your laundry? I’ve always wondered how athletes keep up with it.

JB: During [the ice hockey] season, we get “Bob Wash.” Bob Chiapetta is the equipment manager and the rink manager at Freeman. We get a mesh bag at the beginning of the season, and every day we put the clothes we’ve used in that mesh bag, and you put it on a rack, and they get cleaned.

A: Every single day? And it’s free? What a perk of being an athlete!

A: Now that you’re retired, do you do your own workouts?

JB: Yeah. I’m doing personal workouts and also stuff to get ready. I have to take a physical fitness test, which has things like running three miles, pull-ups, crunches.

A: Can you do a pull-up? Is that a thing that people can do?

JB: Oh, yeah. I have to do nine. The Marine Corps just switched. It used to be that females would only do a flex-arm hang, where you hang on the bar. As combat roles got opened up to females, they said, “Females have to be able to do pull-ups,” which I totally believe. I’m considered a fully trained candidate now—Candidate Brennan. Soon to be Lieutenant Brennan! But we go and train kids who are going to OCS. I just went to Cape Cod and trained a bunch of kids who are going this summer from the entire Northeast, and I had about 12 females, and you have to go in there and ream them for not being able to do pull-ups: “It’s unacceptable! You can’t expect to be welcomed into combat roles if you can’t do as many pull-ups as the males can.”

I’m considered a fully trained candidate now: Candidate Brennan. Soon to be Lieutenant Brennan! But we go and train kids who are going to OCS. I just went to Cape Cod and trained a bunch of kids who are going this summer from the entire Northeast, and I had about 12 females, and you have to go in there and ream them for not being able to do pull-ups: “It’s unacceptable! You can’t expect to be welcomed into combat roles if you can’t do as many pull-ups as the males can.”

A: What are your favorite and least favorite parts of being an athlete here?

JB: The best part is that I came into school with 24 friends. I live with them, eat dinner with them. I had people I could to talk to and, in my coach, had an adult figure I could talk to. A downside is that we definitely get judged a little harder: I walk around in my Wesleyan Hockey sweatshirt, and we’re always being loud, dapping each other up. That’s kind of just athletes in general, we’re outgoing and loud. Here, that’s different.

A: How do you deal with losing?

JB: I’m good at this now because we lost so much last season. First off, we hopefully come home and get to go out. That heals some wounds. Especially as I’ve gotten older, I’ve taken it with a grain of salt. It’s really just a game. Especially in retirement, I’ve realized that. I’m always going to play hockey at some level. I am very competitive, and I take losses personally, but once you get home and hang your gear up, you have to leave it in the locker room. “It’s all right: next time we’ve got ’em.”

A: Are you competitive in other arenas?