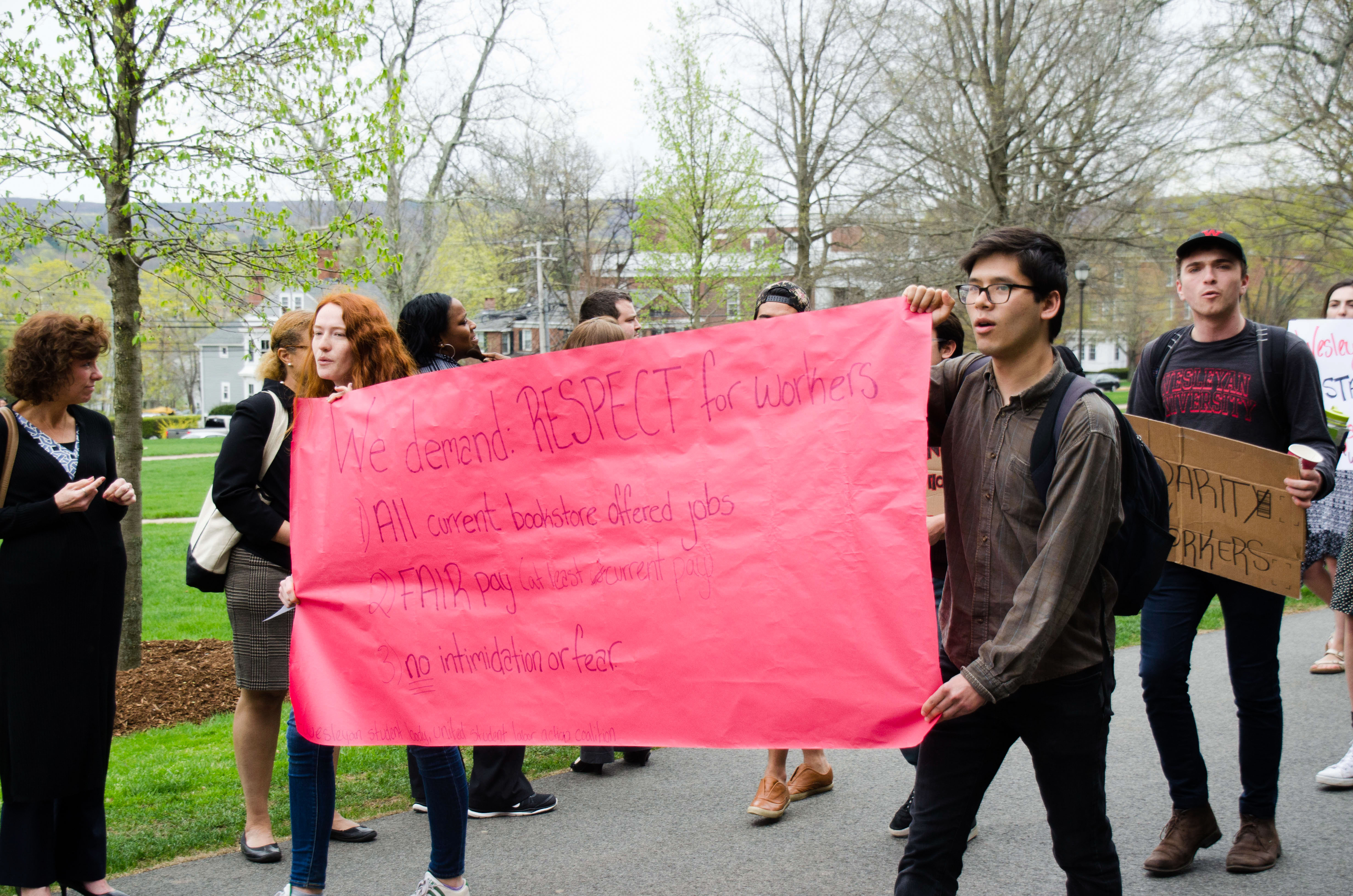 On Monday, April 24, student activists and members of the United Student-Labor Action Coalition (USLAC) protested the hiring practices of the company who will manage the University’s new bookstore, R.J. Julia Booksellers. Students met with R.J. Julia representatives and Wesleyan administrators to discuss the University’s role in managing the transition for employees of Broad Street Books. Assembling outside of North College, a coterie of students of all years rallied to support Broad Street workers, who they believe have been mistreated by the University, R.J. Julia, and Follett, Broad Street’s parent company. Speaking with representatives from R.J. Julia, the students reiterated their three principle demands: That the new bookstore ensures all current bookstore workers keep their jobs, that all returning workers receive wages equal to or higher than their previous wages, and that R.J. Julia cease to intimidate workers who speak out.

Student organizers led the crowd in a series of chants, which included “Fair wages! Fair work!,” “No intimidation, no fear! Workers must be respected here!,” and “We’ll be out here every day, until you let the workers stay!” Fifteen minutes into the protest, a fire alarm began ringing, and students proceeded to march to the other side of North College chanting “Whose store? Our store!” as administrators looked on.

“The meeting was cut short by the fire alarm going off in North College, an event that disappointed USLAC and the assembled students because it limited what could be discussed in the meeting with R.J. Julia,” USLAC wrote in an official statement after the protest.

However, despite the interruption, many of the student protesters were able to go approach R.J. Julia owner and founder Roxanne Coady. Emma Borzekowski ’19 stood by the front of the crowd, calling students forward to voice their concerns with R.J. Julia’s management decisions. One student spoke about their frustration over R.J. Julia’s hiring policies, especially in the context of the values held by University students who belong to organizations like USLAC.

“I just don’t really understand, if you work at a liberal university how that kind of jives with paying workers unfairly,” they said. “Because if you’re going to promote all these values for us, it kind of really instills the idea of moral responsibility. I understand that there’s [sic.] budget constraints that the university has to go through, but paying fair wages isn’t something that we should have to push [the University administration] to do. It’s an initiative you should take on your own, if these are values you are marketing and claiming to support.”

Sophie Sokolov ’18 also spoke out during the protest, criticizing the bookstore’s selling of the “R.J. Julia experience.”

“I’m unsure what that would mean if it’s supposed to be a community bookstore, and how that community can possibly not include the workers who are currently there who are fostering the community that already exists there,” Sokolov said to Coady. “And, given that it’s supposed to be a bookstore that’s bridging Wesleyan and Middletown communities, I am concerned about already starting off selling a particular experience that seems to not include people who are part of this community in this space.”

At one point Sokolov asked Coady if she was only interested in the experience of the customers, which Coady denied.

“Of course I’m interested in the workers’ experience,” Coady said. “The hot topic that’s been said is that the R.J. Julia experience is only about the customers. It really was intended to be that a customer can come in and find the book they want, listen to an author that they want to, and that when they leave the store they want to come back.”

Borzekowski ended the portion of the protest in which students voiced their thoughts to Coady by presenting her with a letter voicing more concerns with the new bookstore.

“We’re committed to welcoming an R.J. Julia’s that respects its workers,” Borzekowski said. “You had the student meeting, and you unfortunately only had the chance to speak to very few students. We’ve had 552 students sign a letter asking that we have an R.J. Julia’s that respects the workers that are currently employed at Broad Street, and any workers that will work for them.”

After The Argus published “Wesleyan Bookstore Hiring Practice Makes for Turbulent Transition” last week, University Manager of Communications and Public Relations Lauren Rubenstein responded with a series of clarifications rebutting student claims and the testimony of an anonymous Broad Street worker. Rubenstein disputed the accusations that R.J. Julia ever guaranteed Broad Street workers they could keep their jobs (they did grant every employee a chance interview) or offered salaries to Broad Street employees that were lower than what they are currently earning. She also dismissed the idea that Broad Street employees who were told that the new bookstore was looking to cultivate the “R.J. Julia Experience” faced racially discriminatory hiring practices. Finally, Rubenstein stated that Follett had a responsibility to inform Broad Street employees of the University’s decision to open a new bookstore with R.J. Julia next fall.

“Wesleyan informed Follett of the transition in advance of the public announcement in November,” said Rubenstein. “It was Follett’s responsibility to inform its employees at Broad Street Books of the change.”

This afternoon, Alec Shea ’18, Communications Director for USLAC, responded to The Argus’ requests with an official USLAC statement in response to Rubenstein’s letter.

“No one from USLAC claimed [that workers would be guaranteed jobs] as far as I know,” said Shea. “We’re protesting precisely because workers were not guaranteed that they would get their jobs back. We will continue to protest until that assurance is given.”

USLAC’s response also dealt with a number of Rubenstein’s other rejoinders.

“We said ‘minimum wage or lower salaries,’” USLAC said. “We are aware that some workers were already making minimum wage. Their correction doesn’t change the fact that people were offered minimum wage salaries, which is to say that people were offered salaries that are nowhere close to a living wage. [In addition], the fact that Wesleyan just assumed that Follett would inform employees shows everything that’s wrong with these kinds of subcontractor relationships. These workers are part of our community, the school should address them directly and not rely on subcontracted companies. We’re surprised that the revelation that Follett didn’t talk to workers hasn’t spurred the school to encourage R.J. Julia to be more communicative than the last bookstore owners were.”

R.J. Julia Bookstore owner Roxanne J. Coady addressed the controversy in an email to The Argus, and submitted a Letter to the Editor in the paper.

“We have met with student groups and we look forward to having more conversations in order to clear up any misunderstandings and be responsive to concerns about R.J. Julia’s hiring practices,” Coady wrote. “We’re excited about the strong team we’re building—both former members of the Broad Street Books staff and other members of the community—and we are working hard to get everything in place for the opening next month. Our goal is to create a partnership that is great for our employees, Wesleyan and the city of Middletown.”

While USLAC wrote that they appreciated the willingness of R.J. Julia representatives and University administrators to meet with students, they also reaffirmed their commitment to organizing in support of Broad Street workers until their demands are met. As students dispersed from the protest, many of whom were chanting “We’ll be back,” the words of one first-year student captured the mood of student activists.

“This is our bookstore and our community,” Alex De La Rosa ’20 told University administrators. “We will bring the fight to you.”