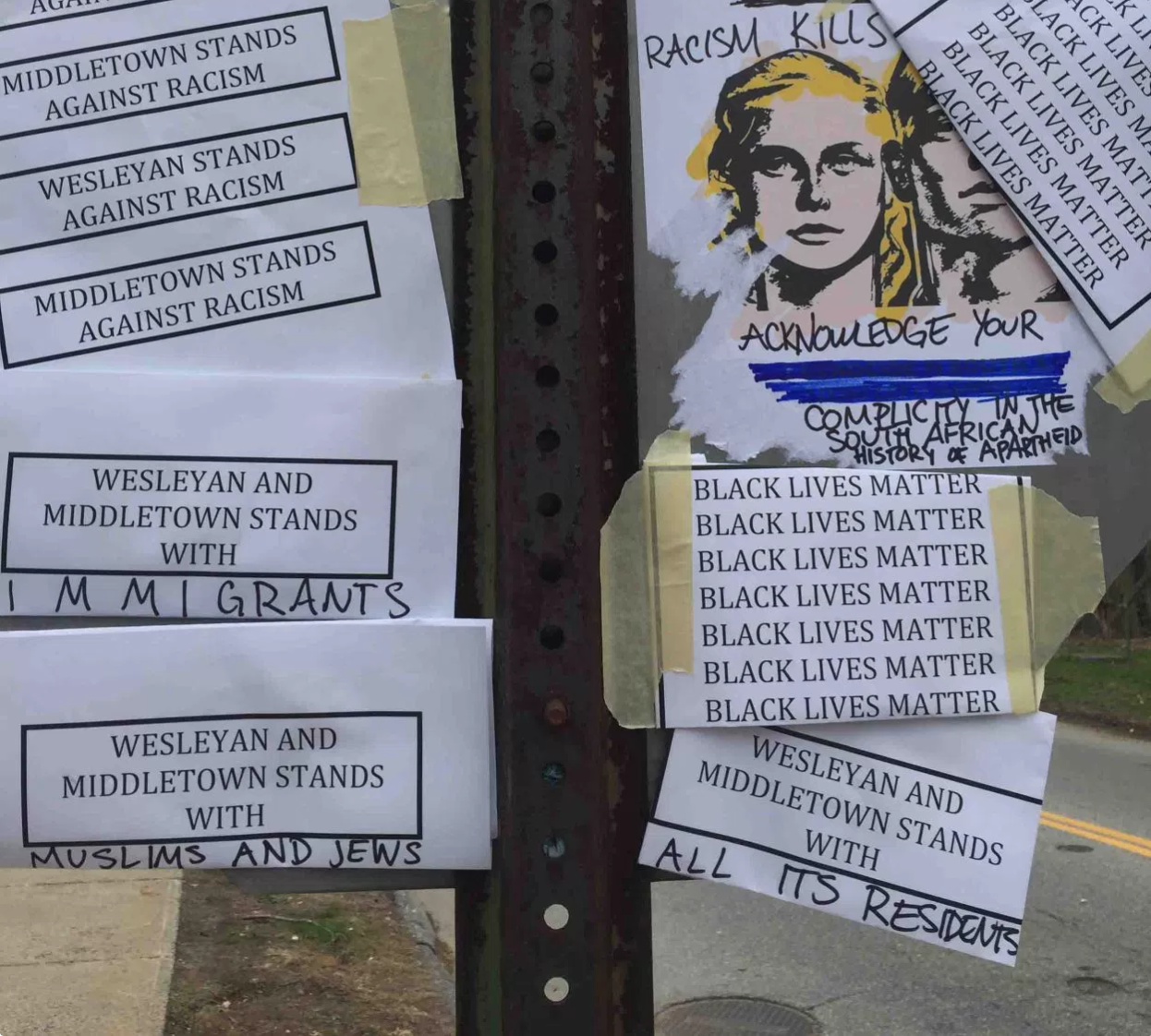 A series of hateful posters appeared on campus and in the surrounding area on Monday morning. The signs, which include anti-immigrant, racist, and anti-Semitic rhetoric, were reported on various social media platforms by alarmed students and have elicited a response from the University administration, as well as from the Middletown Police Department.

On Monday evening, Vice President for Student Affairs Mike Whaley explained to The Argus what the administration knows so far about the signs.

“I saw one of the posters myself on the way to the gym, at about six [in the morning], and we were notified about a couple of others during the course of the day,” Whaley said. “As far as we know, they’re all on city property, not Wesleyan property: light poles, stop signs, and none on buildings or property.”

Two posters, one alluding to “white genocide” in South Africa and the other expressing anti-Marxist sentiments, had been stamped to an electric pole outside Exley. One student who wished to remain anonymous, Dylan, saw a number of the posters when she was walking to her house Monday morning.

“I assumed [the anti-Marxist poster] was a social critique about how the United States will intervene in Latin American countries and fund state violence against socialists and their sympathizers, but then I saw the one about ‘illegal immigrants’ and realized that I’d clearly misinterpreted the first one since the second one had the phone number for immigration and customs enforcement (ICE),” Dylan wrote in a message to The Argus. “When I saw that one I was really upset and tried to take it down but I couldn’t peel it off of the stop sign.”

Dylan was one of several students who posted photos of the posters on Facebook. She hoped that her post would encourage people to cover up or remove the signs. 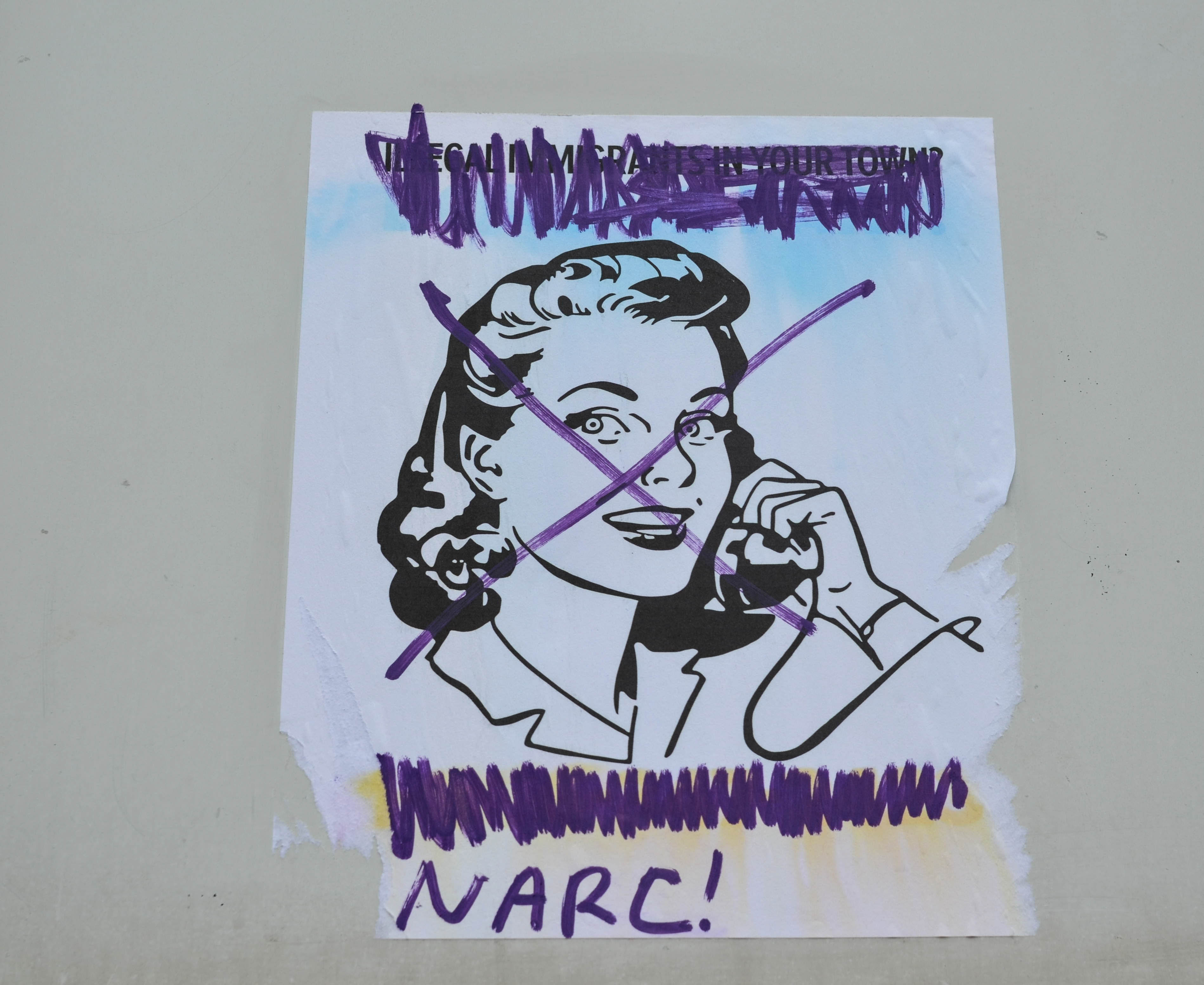 “I saw quite a few of them and tried to take down the ones I could reach,” Dylan wrote. “Most people seemed to just want to cover them up or take them down, which…seems like a pretty good idea to me.”

Whaley explained that the Middletown Police Department (MPD) has indicated that most of what they have seen is on the periphery of campus rather than in the heart of it. The MPD also noted that the signs are not pervasive in other parts of Middletown.

“We don’t think at this point that any member of the Wesleyan community is involved,” Whaley said. “We’re suspicious there are some national groups trying to stir up a reaction with what I think is hateful rhetoric. Some of the posters you can find online, even.”

Dylan also suspects that members of the University community are not responsible for the posters.

“I’m assuming they were put up by Middletown residents who are greatly opposed to the idea of Middletown being a sanctuary city because they don’t think undocumented immigrants have the right to be here,” Dylan wrote. “Why now, I’m not completely sure.”

Whaley relayed that the MPD command structure has indicated that its officers should remain on the lookout for the posters and remove them upon discovery.

On Monday night, after an anonymous tipster alerted the campus blog Wesleying that a group of white supremacist protesters would be demonstrating against affirmative action in front of the Office of Admission, a coalition of University students gathered in preparation to resist them. Alongside these students was a local branch of Antifa, a group devoted to rejecting fascism. 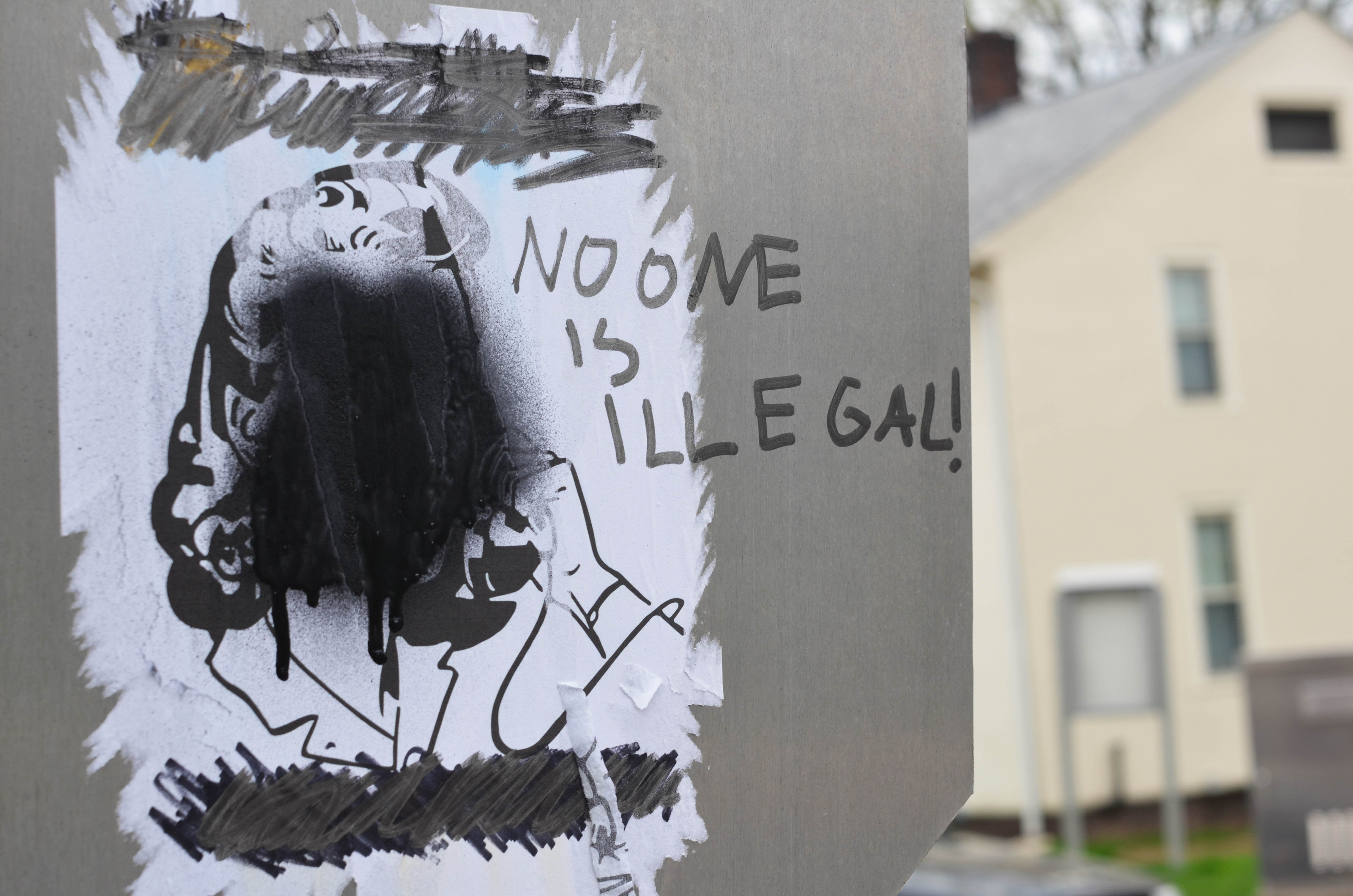 One of the students who organized the would-be resistance was Abby Cunniff ’17, who explained that she and a number of other students had been on the lookout for a white supremacist gathering around the Usdan University Center and Beckham Hall between 7 p.m. and 10 p.m. on Monday night. No white supremacists arrived, but many students remain vigilant.

In an email to the campus community from Whaley and Vice President for Equity & Inclusion Antonio Farias, the administration requested that students who encounter the protests report them through the Incident Reporting Form or contact Public Safety.

The email also underscored the administration’s support for marginalized students.

“We support undocumented students and reject all aspects of bias in our community,” Whaley and Farias wrote. “As we have stated previously, our campus has no place for speech that targets individuals or groups based on religion, race, ethnicity, nationality, citizenship status, gender, disability, sexual orientation and/or gender identity or expression. We are a campus that welcomes and celebrates every member of our community; we will not be divided.”