A Eulogy for Chuck Berry, Vices and All 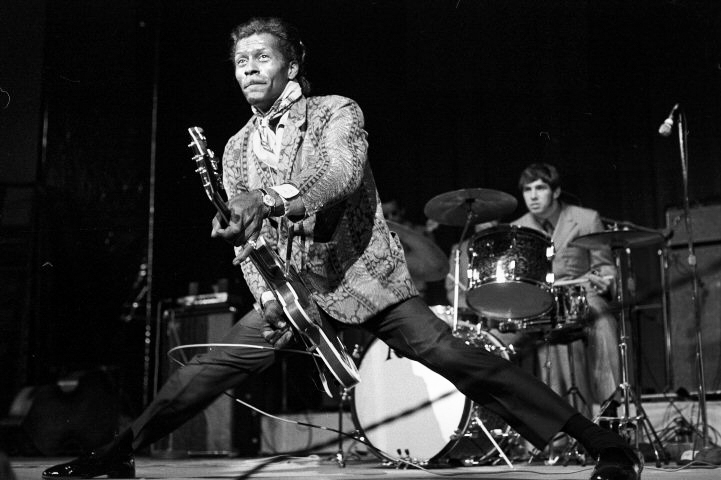 Chuck Berry, the blues man, the country boy, the songwriter, the car thief, the pop icon, and, mostly prominently, the daddy of rock n’ roll, passed away on March 18 in his home in Wentzville, Montana. He was 90 years old. If you listen to any sort of rock music—be it classic, hard, soft, alternative, grunge, or psychedelic—you surely know that he lives on through his through his fat bends, sexy little slides, punched hammer-ons, and the poetic lyrics.

Born in 1926, Berry grew up outside of St. Louis, where he spent his time making trouble and absorbing what he later describes in his hit “You Never Can Tell” as “rock, rhythm, and jazz.” After a three-year stint in reform school for car theft and armed robbery, Berry got married to Themetta Suggs, with whom he had four children. It would certainly be wrong to say Berry settled down, however.

Instead, he spent the early part of the 1950’s touring around the South, playing a mixture of a pop, country, and blues with a variety of bands. Finding that folks enjoyed his guitar’s bluesy twangs and picked-up rhythm, Berry decided to take his music to the blues capital of that day, the city where twelve-bar rounds in minor pentatonic on steel string found an amplifier: Chicago.

There, in one of the most important meetings of blues/modern rock music, Berry found his idol, Muddy Waters. The blues icon, who had just recently recorded his smash hit, “I’m Your Hoochie Coochie Man,” had already made a significant impact on Berry’s guitar playing. A young Chuck had been copping his two-string bends for years and would later use this technique in his divine guitar opener to “Johnny B. Goode.” Muddy’s more direct impact, though, was when he suggested that Berry check out the famous blues label, Chess Records. It was here that the man out of Missouri found his edge, not to mention his first hit, “Maybellene.”

The song featured an upped tempo, railing guitar licks, and lyrics in the emerging trend of fast cars and young love. It became an instant hit, reaching No. 1 on R&B charts and framing what Berry would develop into his signature rock n’ roll. This style would later inspire groups such as the Beatles and the Rolling Stones.

Chuck Berry followed this early success with songs such as “Roll Over Beethoven” and “No Particular Place to Go,” which easily became hallmark tracks of his era. While touring from city to city though, the OG rock star never let the blues of his music escape its country beginnings. In fact, many of his most poetic lyrics depict timeless scenes in the hills. Take the inescapable “Johnny B. Goode,” for example:

“He used to carry his guitar in a gunny sack

Go sit beneath the tree by the railroad track

Oh, the engineer would see him sittin’ in the shade

Strummin’ with the rhythm that the drivers made

The people passing by, they would stop and say

Oh my, but that little country boy could play.”

The other theme here is, of course, youth, Berry’s targeted audience. One of the many things that made Chuck Berry stand out from Chicago’s exploding music scene was that he knew how to sell to a market of teenage baby boomers who were ripe for a little rebellion. Berry’s ability to capture the imagination of teenagers, often with sex and car chases, helped catapult him past where he’d ever be with only his guitar.

It’s notable that Berry did have an inveterate urge to live out his risqué lyrics, occasionally landing him in the slammer. In 1959, the emerging star transported a teenage girl across state lines for what a court deemed immoral purposes, earning him a 20-month jail sentence. This, along with the pedophilic lyrics of “Sweet Little Sixteen,” cast a shadow over Berry’s career and preceded a long period of relative dormancy in the artist’s success.

Yet in 1972 Berry crashed back into the charts with the biggest hit of his career, “My Ding-a-ling.” (A dastardly double entendre of a name, proving both that old Chuck’s songwriting powers had not diminished and that he never learned his lesson.)  It was by far his most popular song and would end his successful songwriting career with a bang.

After the excitement over his ding-a-ling quieted, Berry continued to write new songs but generally glided on from his past hits. At this point in his life, Berry had become such a figure of American culture that he began appearing in movies as well as continuing to tour.

In 1979, Berry returned to prison for a few months after he was found guilty of tax evasion, and then later, in 1990, the police found videotapes from the women’s restroom of his restaurant. He bargained, ultimately receiving two years of probation, and appears to have settled down after that.

An old Chuck Berry never put down the guitar. Even at the age of 86, the man was still playing a concert now and then, and in the year prior to his death he announced that he’d be releasing a new album with several new tunes. It would simply be named “Chuck.” He was, indeed, an artist that shook his culture. Shook it till it jived and dived into the rock era. As Berry sings in “Roll Over Beethoven,” “My heart’s beatin’ rhythm/And my soul keeps on singin’ the blues.”