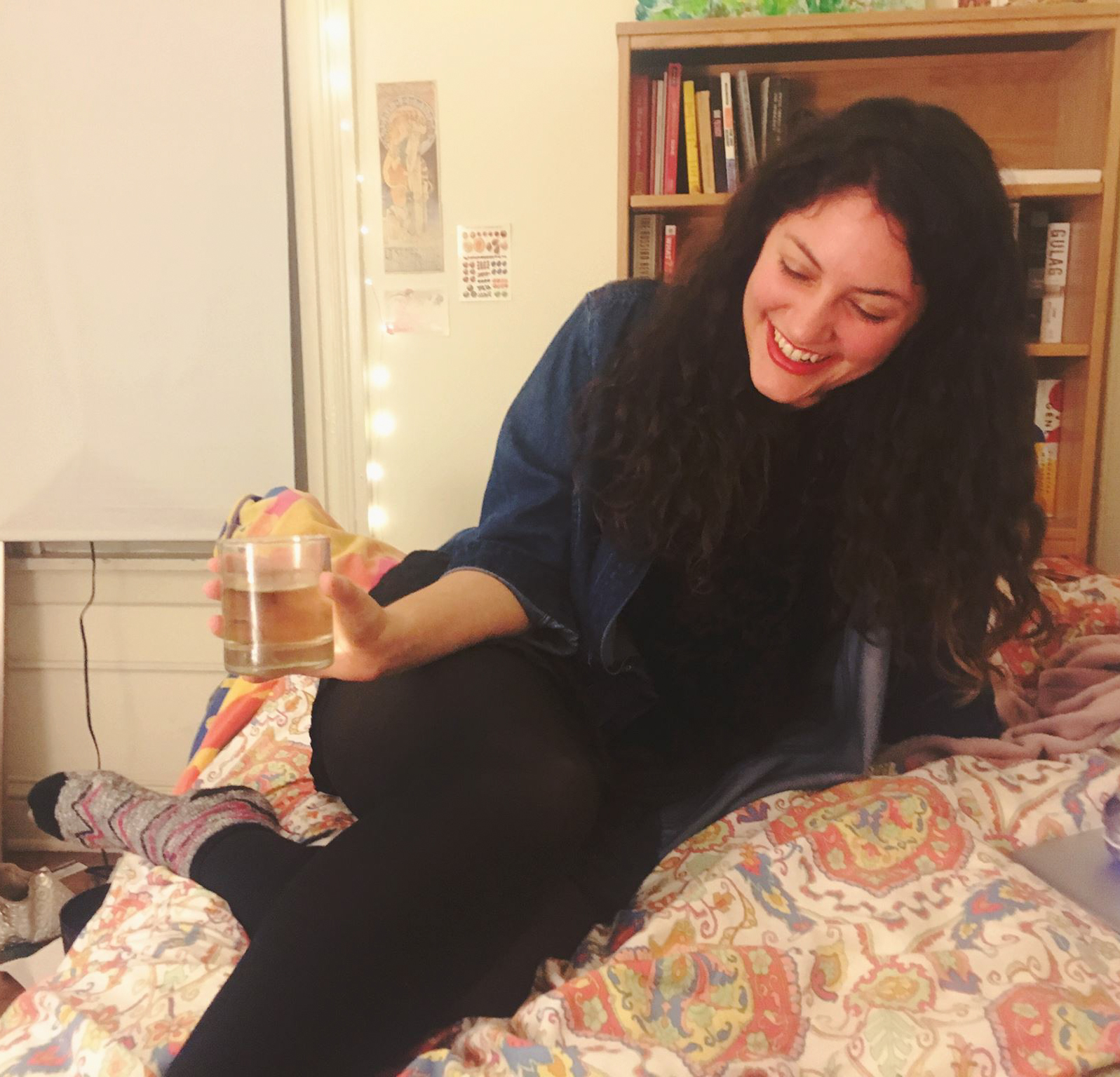 In the last two-and-a-half years, Julia DeVarti ’17 has done more than others at the University do in four. After transferring for her sophomore year, DeVarti became known for her presence in the Jewish and activist communities, which at times have overlapped. After receiving a substantial number of passionate nominations,  The Argus spoke with DeVarti about her campus involvement, communal financial situation, and unique affinity for a now-discontinued Weshop treat.

The Argus: Why are you a WesCeleb?

Julia DeVarti: It’s actually really funny because I’ve always referred to myself as “the most forgettable person” on this campus. I meet all my friends’ friends and I have to meet them, like, 10 times before they remember my name. But no, I guess I’m really involved in the Jewish community, so if anyone’s ever been to a Jewish thing, I’ve been the one standing there, being like, “Sorry I’m making you wait to eat, I have announcements for you!” I drive for the Office of Community Service, so through that job, I’ve met so many people on this campus. And now anywhere I walk it’s like, oh, hey, I know you, I drive you. Or if you’ve ever transferred to this school, you’ve probably seen me at orientation, saying, “Hey, let me tell you some stuff about transferring.” Those are probably the three big ways I’ve met lots and lots of people.

A: So when you say you’re involved in the Jewish community on campus, does that mean, like, running Shabbat most weekends?

JD: Sometimes. I’m one of the Jewish Community Coordinators, so basically I help facilitate the Board of the Jewish Community and meet with Rabbi David [Leipziger] every week and just make sure that everything’s happening and that there’s stuff for all the holidays. It’s mostly working with people to make sure all the logistics happen. It’s coordinating people more than anything else. But yeah, I’m there at Shabbat every week.

A: A lot of Wesleyan Shabbats are somewhat nontraditional…they’ll have different themes and such. What’s the coolest thing you’ve seen there?

JD: Nothing really wild has happened in my time, but Rabbi David likes to talk about a Sex Toy Shabbat that happened a few years ago. It was really weird because the people running it didn’t really know how to work sex toys into a Shabbat service, because seriously, how do you do that? Actually, last [Friday] night, there was a really cool service that was in partnership with the Muslim Students Association. So we did the first part of the Shabbat service, and then we took a break in the middle to do the Maghrib, which is the evening prayer service in Islam. And then we came back and did the second part of the Shabbat service. It was really cool and beautiful, this melding of ritual and coming to share with each other.

A: Are you involved in Jewish activism on campus as well?

JD: Sort of. I run the Lemidah Club…“lemidah” means “learning” in Hebrew. There’s three of us, and we run a group every week that’s about Jewish history and peoplehood and social justice issues through Jewish lens…also thinking about Israel and Palestine, how to relate to that as Jews. I guess if you were to say that I do Jewish social justice things, that’s the main thing I’m doing this semester. It’s a space for people to learn together and process and relate to the world. And I’m going to go protest AIPAC in a few weeks, but I’m not doing any particular Jewish activism this semester.

A: You’re also involved in the Survivors Support Network. What’s the biggest lesson you’ve learned from helping to coordinate that?

JD: I think I’ve learned a lot about partnership, and how to be a real person and support real people who all have very emotional responses in different ways. And it’s taken a different shape in different semesters. Sometimes it’s more activism-based, and sometimes it’s more like a [support group] meeting, and some semesters it’s been more like we’re a support team for underclassmen to come find us and talk to us, and give them resources to report through the school. I’ve learned a lot just about the issue, about how it works at Wesleyan…or doesn’t work, really. But yeah, I think a lot about partnership, constantly thinking about who’s in the group and how we can build something that is really meaningful for us.

A: So you transferred your sophomore year?

JD: Yeah, I transferred January of my sophomore year from Johns Hopkins, which was just not a good fit for me. I could say less nice things, but I’ll leave it at that. Honestly, it was the best decision of my life to leave and come here, and be in a place where I like the people and I like the classes. I like the vibe on campus, that people care about the world. There was no activism at Hopkins, and that was something that was so frustrating, constantly, to see things that I didn’t like and feel really alone in my wanting to do something.

A: How have you changed since freshman year?

JD: I think I’m less patient for bullshit in my life now. I’ve sort of figured out what meaningful relationships and friendships look like, and I’ve really prioritized building those in my life more, rather than trying to run around and be everywhere and be everyone’s friend. Not that I don’t want to be nice to people because I think that’s really important. But I’ve really figured out who is meaningful in my life, and that’s been cool. I came into college thinking I wanted to do creative writing. That was a big shift, to realize that that wasn’t necessarily my big passion. I’ve been really happy in American Studies. And I guess that was a big find in college that maybe changed me and shaped me.

JD: Yeah! So my housemate Abigail, she and I grew up in this socialist Jewish youth movement. And there was this thing called “kupah,” which means “cash register” in Hebrew, so we decided to try that this year. We started a new bank account, and our friend Yael is partially on it, too, and we just transfer our paychecks into it every week. Anything we get is basically on it, which I think is really nice because it changes the way we relate to each other, to not have money be at the center [of our lives]. Like if we want to get a gift for a person, it’s about the act of giving and the gift itself, rather than how much it was worth. It’s so nice when we go out to eat, or when we’re buying toilet paper. We don’t have to do the math or Venmo people. And our joint Venmo name is actually really funny, it’s @Abigulia, our names combined. So there are three people on the bank account, and it makes my life easier. It feels like I get to reshape my relationships and make it reflect my values, more than not.

JD: I am! I guess the elevator speech on my thesis is that I’m writing about the representation of race in different science fiction television shows. It’s really fun, I get to watch TV and call it research, which has been both a great source of fun and a great source of procrastination. But I’m writing about “Firefly,” “Battlestar Gallactica,” and“The 100.” And “The 100” is actually my favorite TV show ever, so it’s been both really fun to get to write about it and sort of upsetting to realize how wrong it is in how it deals with race and sexuality. But I’m basically looking at colorblindness and how it’s operating in those shows. Science fiction is a genre where people get to say that maybe race doesn’t matter in the future, or that it’s not so much of a factor in their characters’ lives. So I’m testing those claims and seeing how the creators reshape and advance colorblind racist ideology.

A: What is your favorite thing to get at Weshop?

JD: I would’ve said those Lego candies from the bulk candy, but apparently it’s mutually agreed upon by the entire campus that they’re a terrible candy. They’ve been my favorite candy for years. I would say it was a very personal attack on me by Weshop when they discontinued the Lego candies. So it’s hard for me to think of my favorite item now. Bring back the Lego candies!