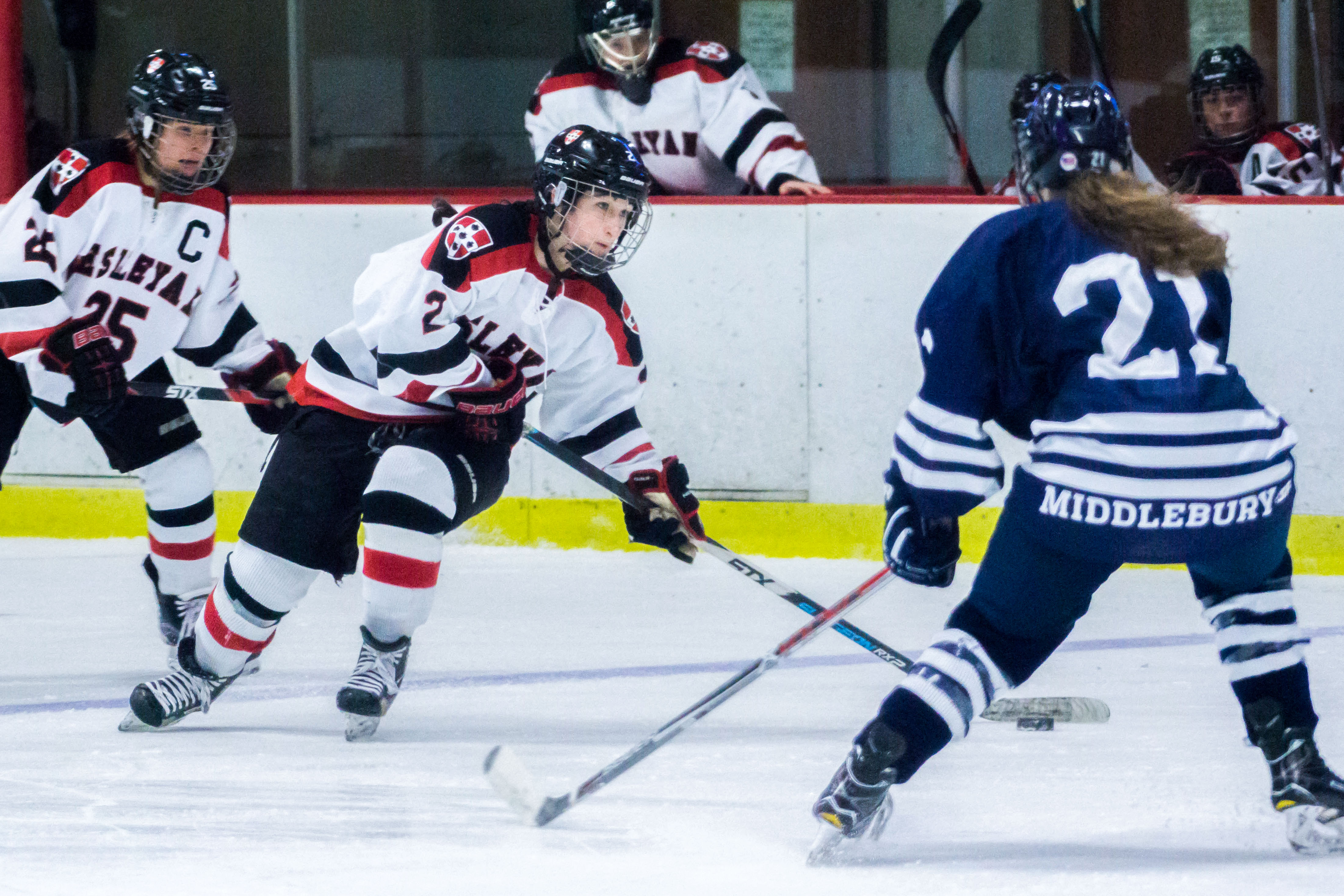 The women’s ice hockey team closed out its season with a loss in the first round of the NESCAC Tournament this past weekend. The squad’s overall record of 7-12-5 and 4-9-3 NESCAC record shows marked improvement from past seasons, and the team will look to build on this foundation next season and beyond.

On Saturday, Feb. 25, the Cardinals traveled up to Middlebury to face the Panthers at NESCACs. Making the tournament is a feat that the team hasn’t accomplished since the 2013-14 season, when they finished the regular season with a 8-10-6 record overall. While that fabled squad came close to advancing to the semis, they fell just short in a 2-1 loss to Bowdoin.

This year’s quarterfinals also proved tough for the Cards, who had to duke it out with the formidable Middlebury Panthers. Middlebury is the top-seeded team in the ’CAC, boasting an overall record of 17-6-2 capped off by a five-game win streak. The Panthers added to their win total on Saturday, handing the Cardinals a tough 4-1 loss.

Middlebury players dominated the first period of the game with two goals at the 3:55 and 18:18 mark. However, the Cards avoided a shutout early on, retaliating with a goal in the second. This was the seventh goal of the season for team captain Ellery Sarosi ’17, as well as the seventh assist for teammate Cici Frattasio ’18. The home team was quick to respond, scoring just three minutes later. As the second period came to a close, the Panthers snuck another puck past Wesleyan goalie Allegra Grant ’20, increasing their lead to three goals. The Panthers’ defense held strong throughout the final period despite the Cards’ best efforts, resulting in a scoreless remainder of the game and a final score of 4-1.

The Panthers are set to move on to the semifinals of the NESCAC tournament to play against Bowdoin, who holds a 13-8-4 overall record. The top seed and sixth seed will play this Saturday, Mar. 4.

The Cardinals, for their part, return home with a .396 winning record. Despite a tough back end to the season, Wesleyan has made significant strides over the course of the winter campaign, showing promise from both an individual standpoint and from the team on a whole. This year’s seniors have contributed heavily to the team on the offensive end, with particular strong performances from Abigail Rutt, Sarosi, and Jess Brennan. Brennan just edges out Sarosi for total points over the course of their Wesleyan careers, recording 23 goals and 20 assists. Sarosi leaves Wesleyan with a grand total of 42 points.

This year’s seven seniors were celebrated prior to departing for their match against Middlebury. On Saturday, Feb. 18 at Wesleyan’s Spurrier-Snyder rink, seniors Rachel Aronow, Sam Curran, Hailey Sholty, and Madzie Carroll joined Sarosi, Brennan, and Rutt in pre-game honorary festivities. The team, like many others at Wesleyan, is made up of a cohesive group of dedicated players, and the seniors are definitely already missed.

“We’re a tight knit group, and because of this everything seems more feasible,” said Alexis Banquer ’20.“There’s always constant support and encouragement from all of the other girls. What our team has this season is something special.”

Banquer leads the seven first-years on the offensive end of the ice, ending this season with three goals. This year’s first-years have brought a lot of defensive power to the team, particularly in goal. Grant and Sam Smith ’20 have been the consistent and committed goalies in 2016-2017, totaling over 750 saves combined in their first seasons as Cardinals. Grant made 36 saves in the last game alone, and is responsible for over 75% of the team’s total saves throughout the season.

With all this rookie power, the team’s future looks bright. Not only will the Cards keep their strong defensive core, but they will also hold onto this year’s highest-scoring skater, Frattasio. Frattasio totaled 14 points this season, split evenly among goals and assists. Also on the offensive side, Gina Mangiafridda ’19 is the second-highest scoring non-senior, putting in seven points this year and 10 over her two seasons as a Cardinal.

Though the squad’s season ended in a tough loss against a powerhouse, the Cardinals can go into the offseason feeling proud of what they’ve accomplished this year. The team not only nearly doubled its win total from last year, but also made some serious comebacks in NESCAC play. With a strong core of youth and a tight-knit unit that extends well beyond the ice, the team is sure to accomplish even greater things come November of next year.