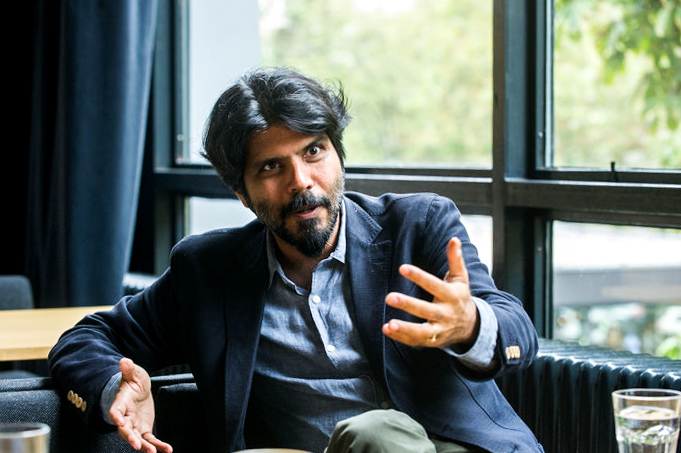 Pankaj Mishra has written all his life. Not only does he regularly contribute to publications such as The New York Review of Books, The Guardian, and The New Yorker, he has also authored a number of nonfiction and fiction works that have received high praise and numerous awards. According to Mishra, creating the well-researched and thoughtful pieces that he’s known for takes dedication and perseverance, and from time to time, eavesdropping.

Mishra addressed this advice to a group of students at a Q&A session in the Downey House lounge on March 2, prior to the lecture in Russell House later that evening. While the Q&A session primarily covered questions about the writing process and the pieces students had read in class, the lecture revolved around Mishra’s new book, “Age of Anger: A History of the Present.”

The seats in the Russell House lecture room filled quickly by 8 p.m., and many students found themselves seated on the floor or outside when Assistant Professor of English Hirsh Sawhney took the podium to briefly introduce Mishra and his recent work.

“When I was your age, not too long ago, I lived in London, and every weekend I would rush to the local store where I lived to buy a copy of The Guardian weekend magazine to be able to read the most recent article by Pankaj Mishra,” Sawhney said to the crowd. “And those reads were invigorating and eye-opening to me. All that’s to say that it’s pretty amazing and remarkable to be here 15 years later, in this capacity.”

Sawhney then noted the importance of reading works by people like Mishra in this current political landscape, a landscape in which Donald Trumps are elected president, Britain leaves the European Union, and Hindu Nationalism is rampant in India.

“If we seek to move on from this horrible present,” Sawhney added, “We need to ask ourselves: ‘How did we get here?’”

“Pankaj Mishra’s erudite and illuminating new book The Age of Anger enables us to commence with this reckoning,” Sawhney said, and invited Mishra to the podium.

Mishra opened with a discussion of Timothy McVeigh. In 1995, McVeigh parked a truck filled with explosives outside of a Federal building in Oklahoma and detonated it, killing 168 people in what became known as the Oklahoma City bombing. He was executed in 2001.

Mishra drew on the similarities between McVeigh and the Islamic extremism that now defines so much of the world stage. As Mishra discussed, what connects these two forms of terrorism is an ostensible fundamentalism, which he sees as an imposition of rationality on what is an unpredictable, emotional being: humans.

“Such ideological eclecticism only became possible because all these lone wolves possesses a will to violence and mayhem untrammeled by any fixed doctrine Islamic or otherwise,” Mishra said.

Mishra sustains that the urge to pin some rationality on extreme terrorism—in McVeigh’s case a conservative radicalism and in Islamic extremism case a religious fundamentalists—is due to the modern tendency to frame everything through economics idea that humans will always act in their best interest.

After Mishra’s opening reading, he sat down with Sawhney for a conversation about liberalism, relations with Islamic states, and media in the modern age of Brexit and Trumpian politics. Sawhney posited a question about international politics in this era, to which Mishra replied with commentary on a variety of political subjects.

“I think perhaps, we during the Cold War got into the habit of thinking very simply about the world,” he said. “We didn’t have to think too hard, let’s put it this way, about the world, which was divided into the free world and the un-free world…And those habits of thought, those very simple habits of thought, we then basically moved them over to Islam, saying that we are locked in some kind of ultimate generation-long struggle with Islam and fascism or Radical Islam. Which in our minds is a very slippery slope.”

The two moved on to a discussion of national power and pride.

“I think the addition of great power always has this effect of making people fundamentally complacent, of thinking that the rest of the world basically wants to be like us, and that we are a great model for everyone else, and that our technologies, our economic methodologies, are successful and that they should be followed by other people,” Mishra said.

Mishra noted that these kind of theories can find their way into the mentality of a nation, such as the United States, without being fundamentally challenged. He added that this is worldview, with the advent of Brexit and Trump, is now being challenged, thus causing a state of shock in American and British citizens.

The two then began discussing Mishra’s book, specifically in the context of 17th and 18th century thinkers, to which Mishra referred throughout its pages.

“When I started thinking about this particular book, I felt that I had to go back…to the moment when the modern world that we live in, when its principles were being formulated,” Mishra said. “When we were debating what sort of society we should make, we should have, given that we are moving away from older forms of society, which were dominated by tradition, traditional religion, or traditional forms of political authority. And it was important to look at those debates and to identify the problems that were even then being diagnosed in the late 18th century.”

Sawhney, later in the conversation, brought the topic around to Arabic and Asian writers who are left out of Western canons of literature. Considering the importance of these perspectives and works, Sawhney asked Mishra his thoughts on the effect of the loss of these voices. Mishra explained that this loss stems from the large egos of large countries.

“Big countries—and I come from India, we suffer from the same syndrome—big countries have big heads. They are self-centered. They produce huge amounts of culture, literature, art. And so yes, there has been a creative intellectual loss.”

Following Sawhney and Mishra’s conversation was a Q&A session, in which students and faculty addressed Mishra with their questions. Topics ranged from Assistant Professor of English Lily Saint’s questioning of Mishra’s reliance on male figures in his talk that evening to the increasing threat of demagoguery in age of dwindling social mobility.

At the other Q&A session that took place previously in the day in Downey, Mishra discussed his affinity for writing about politics.

“It’s always fascinating to me: this process of finding out just how one comes to be interested in the the things one is interested in,” he said. “What are the different accidents, why did I think of this. That in itself is a narrative that I feel should be told, should be shared.”