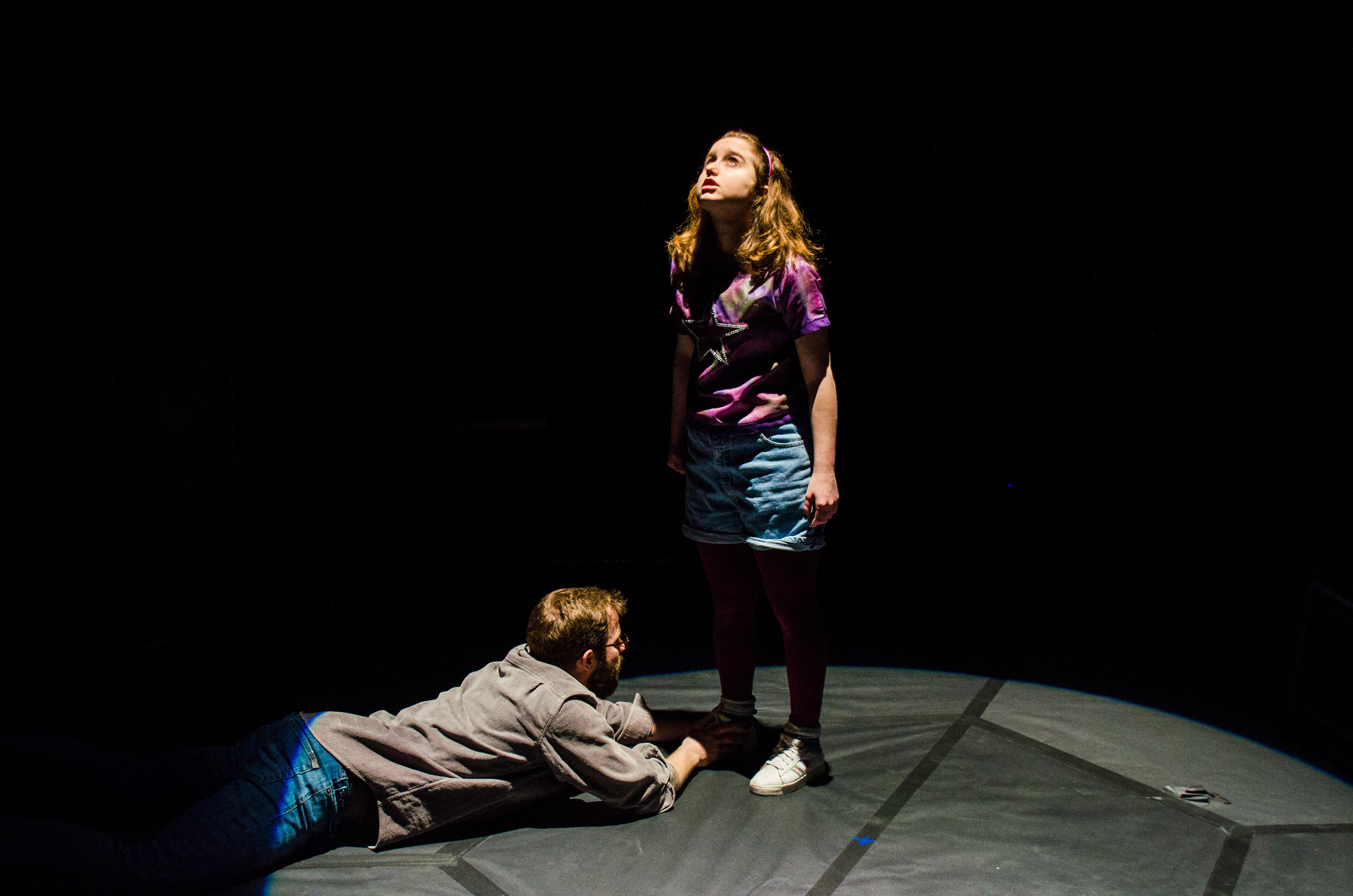 In the age of fake news, conspiracy and reality can be difficult to tell apart. “Don’t Leave,” a sci-fi drama written by Russell Goldman ’17 and Sofie Somoroff ’18, pays homage to classic alien mythology most commonly found in “The X-Files” and “E.T.” while spinning a tender tale about a father’s love for his daughter.

Upon entering the ’92 Theater, audiences are struck by a hexagonal stage design, the seats surrounding it on all six sides and the stage lit up like the set of “TRON.” Above the stage hang more reflective hexagons, meant to allude to the hexagonal plates of a UFO. Goldman and Somoroff found the idea for the set while looking at old stills from “Close Encounters of the Third Kind.”

Because the stage is sparse, the lighting and sound do most of the work. The opening scene begins with an abduction of the two main characters: Beth (Nicole Boyd ’18) and her father Bill (Doc Polk ’19). Radio recordings of mid-century sci-fi mainstays, like the television series “Roswell,” echo throughout the ’92, and harsh spotlights drown the two figures. When the light and sound fades, the show’s second biggest draw becomes clear: rapid, parallel dialogue.

Throughout the play, Beth rattles off pseudo-scientific calculations and theories. Goldman worked with astronomy major Avi Stein ’17 to make sure her monologues were rooted in actual science. Aside from fluorescent aliens and space jargon, the heart of the show lies in the relationship between Beth, a budding extraterrestrial conspiracy theorist, and Bill, who is divorced from Beth’s mother and clearly vying for Beth’s affection. He argues with her mother over the phone while Beth stares up at the sky, convinced she has seen a UFO. They pace back and forth around the stage, relying on blocking that is deftly aware of the audience surrounding on all sides.

“Technically it was hard to figure out sight lines on a six-sided stage, and [it] required test audiences and a lot of trial and error to arrange seating that wouldn’t offer a bum seat,” Goldman said. “But we wanted to create an immersive show, and we were thrilled to create a show that could be completely different wherever you sat.”

Goldman affirms that the blocking of the scenes directly related to the spatial relationships of the main characters.

“In scene one, where they engage in separate conversations, they only use the perimeter,” Goldman said. “In the cafe scene, they only have an in-between portion of the hexagon to play with, which added to the constraint.” 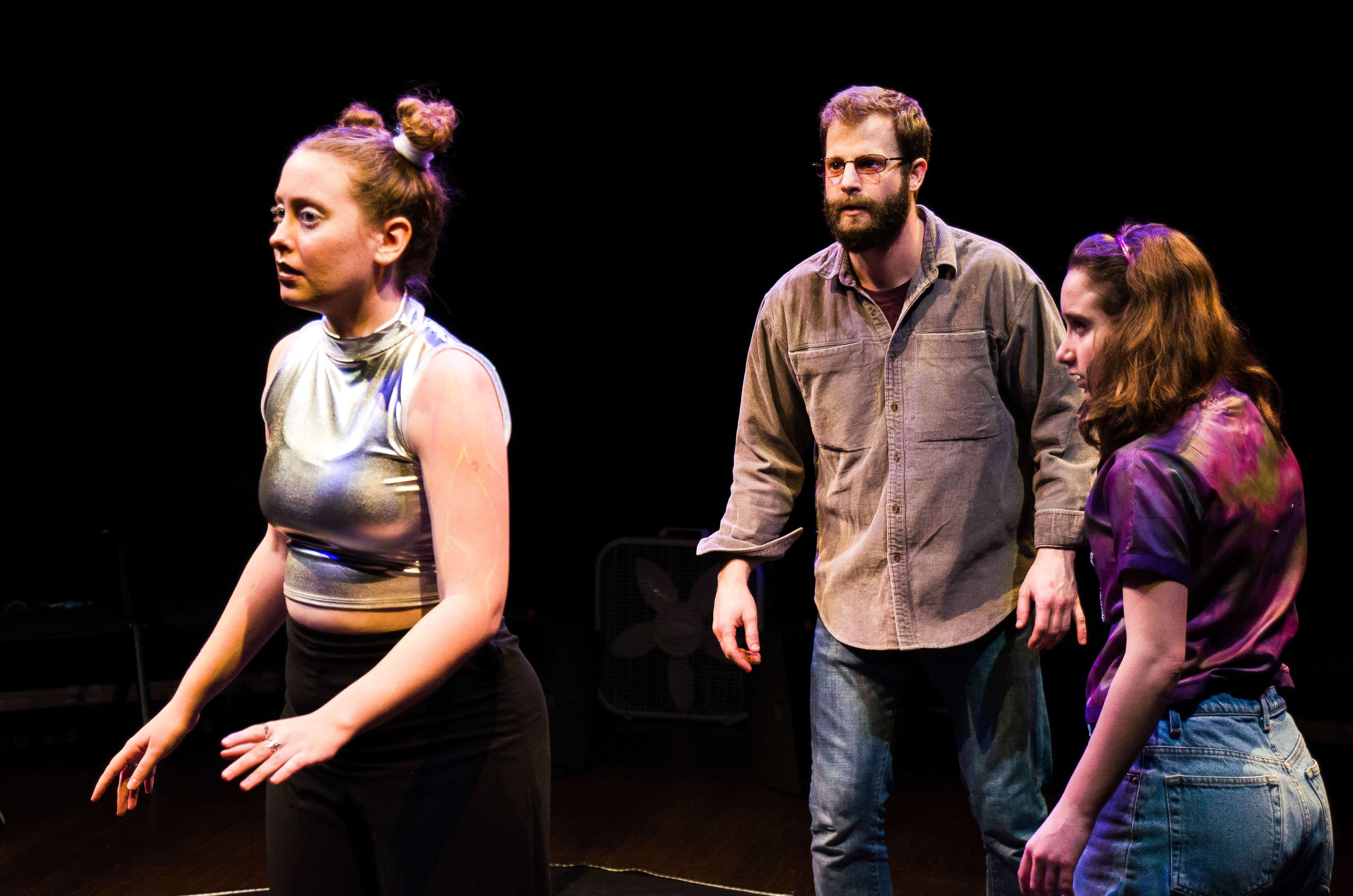 Beth’s father clearly doesn’t understand her, but he wants to. When she shares her theory about NASA spacecrafts gathering “debris,” her father gently tells her that these conspiracies are only “fake news.” The buzzword  is repeated several times in, which contextualizes and pushes a slightly nostalgic genre forward into the 21st century. Beth insists that she has seen aliens before, and in the middle of her outburst she suddenly becomes abducted herself, Bill clinging to her feet in tow.

Until the alien arrives, the costuming in “Don’t Leave” is thorough but fairly nondescript. Beth could be any 8-to-10-year-old girl, and her father is bookish and, well, dad-like. Before the abduction, Beth’s stomach glows underneath her shirt in a constellation-like birthmark in a nice synthesis of light and costuming. The alien, however, would otherwise resemble every girl’s Halloween costume this year if it weren’t for the intricate neon, vein-like paint on her arms, face, and neck.  Rachele Merliss ’19, who plays the alien, acted the part, swinging gracefully from poised cosmos explorer to foreboding space monster.

For a play so heavily based in its dialogue, the scene between Beth and the alien sticks out because instead of verbalizing extraterrestrial culture to Beth, the alien dances with her. The choreography was a collaboration between Goldman, movement director Rachel Rosin ’19, and composer Josh Davidoff ’18.

“I wanted a moment that felt like a release in the play, where two of the characters were learning, sharing and communicating,” Goldman said.

The crux of the story lies in Beth’s decision between leaving with the alien to explore her own planet and staying with her father. Goldman recalls that “Close Encounters”—a movie about a man who abandons his family to chase aliens—had been a large influence for the premise of the play. The biggest challenge for Goldman in directing was to keep the spectacular sci-fi elements while still grounding them in the relationship between Beth and Bill.

“I wanted the scenes in space to feel as natural as any of the punishingly ordinary father-daughter conversations,” Goldman said.

Although “Don’t Leave” highlights the extraterrestrial, its characterization truly shines, proving that life on Earth is something worth sticking around for.