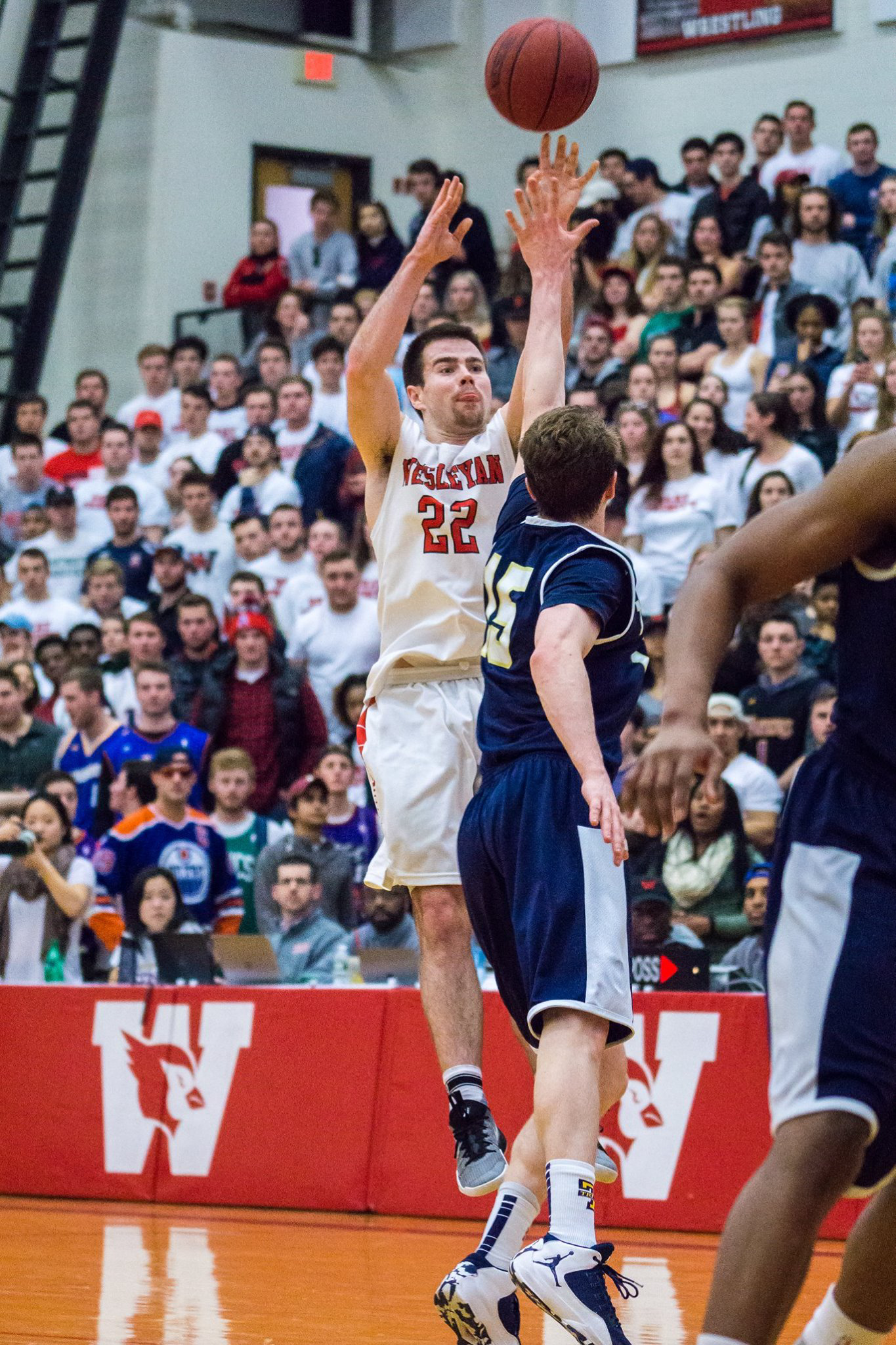 A sweeping hush fell over Silloway Gymnasium this past Saturday as Trinity’s Ed Ogundeko sunk a near-buzzer-beater to knock the Cards out of the NESCAC playoffs, 49-51. The game was grueling, defined by stalwart defense, blown chances, and numerous penalties committed by both sides. The Cards held the lead for almost the entire game, but Trinity chipped away steadily to snag victory at the last second. Despite this game marking the end of their conference postseason, the Cards still have a chance for an at-large bid to continue into the NCAA playoffs.

Wesleyan’s defense began as an impenetrable shield around the paint. The team forced Trinity to the outside where the Bantams consistently missed jumper after jumper, only scoring four points in the first 9:30 of play. The problem was that while Wes was able to keep Trinity off the scoreboard, it struggled to recover rebounds and get its own offensive momentum going. The Bantams helped the Cards a little by consistently committing fouls and violations, especially with travels, but it was not enough for the Red and Black to take a commanding lead. With 4:32 left on the clock, Wes managed to go up by nine, but this was as far as the lead would stretch in the first half. The two teams hit the locker room with Wesleyan up, 26-20.

Harry Rafferty ’17 started the second half sinking back-to-back threes, giving the Cards a 35-24 lead. From here, the contest only got closer as the Bantams’ jumpers began to fall in. Both teams continued to play formidable defense throughout the half, and the scores grew slowly. At 2:18, a quick six-point run by Trinity tied the game at 47, but the Cards responded quickly, going up by two with a lay-up from Kevin O’Brien ’19. Trinity fired back within seconds to even the score. The next minute passed by scoreless, after Wesleyan blew important chances from the line. With :17 left on the clock, Trinity held possession with a chance to take the final shot. Ogundeko worked himself into the paint and got a friendly roll, sealing the contest with one second left.

The buzzer marked the end of a long but impressive NESCAC season for the Cards. The team had come into the season looking unstoppable, gliding undefeated through December. Once NESCAC play started in January, however, the team had to battle fiercely in an intensely competitive conference. Kevin McDonald ’20 reflects back on some of the year’s highlights, as well as what still may come.

“I thought we did a lot of great things this season,” said McDonald. “Winning the Little Three Championship was awesome and something we had not done in a while. I thought we overcame a lot of adversity too and we overcame a lot of close games, especially on the road. Obviously, a tough way to end the league season losing to Trinity, but we’re optimistic about reviewing an at-large bid for the NCAA tournament.” 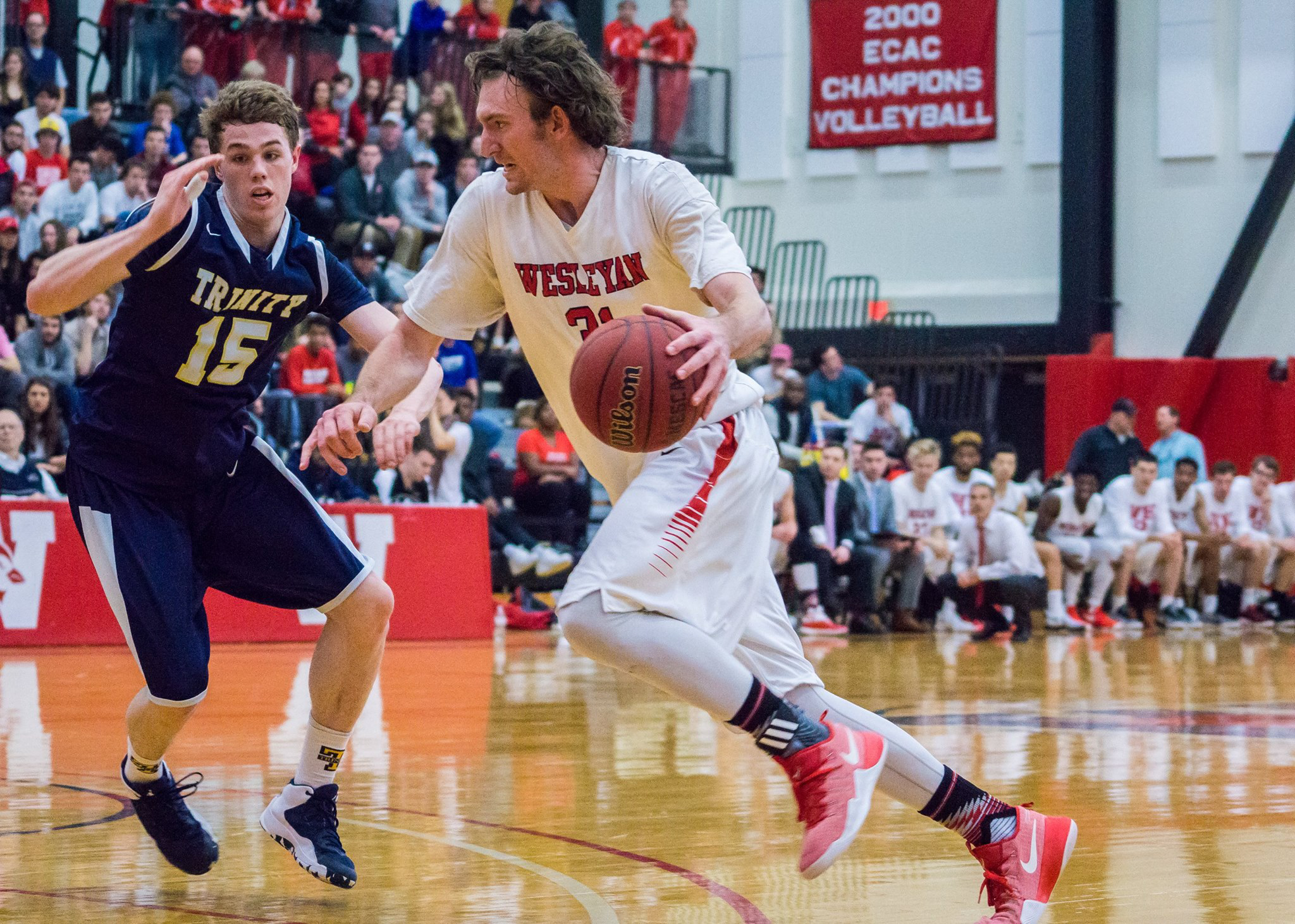 Rafferty echoed the same pride about what a strong season it has been, and looks for a playoff bid to keep the strong season going.

“I’m incredibly proud of what we have accomplished this year,” said Rafferty. “I feel lucky and honored to be on a team with so many great guys, and I hope we can make the NCAA tournament to keep it going a little bit longer.”

Head coach Joe Reilly acknowledged the tough conditions against Trinity, and praised Wes students for what was one of the biggest turnouts of the year.

“Proud of our guys for a gritty effort on Saturday,” said Reilly.  “A special thanks to all the students who gave us an amazing home court advantage. The spirit and energy in Silloway was awesome.”

When Reilly looks back at this season, he sees not only what this team has achieved, but what these accolades may still drive them towards.

“We are disappointed we lost but not discouraged,” Reilly said. “We were one play away from a different outcome.  We are in the conversation for an at-large bid to the NCAA tournament and will know next Monday. This is a great group of men and I hope our 19 wins and consistent presence in the Top 25 this year is enough to extend our season.”

The Cards await Feb. 27 to find out if their season will continue, where they could be admitted to the NCAA tournament on what McDonald referred to as an “at-large bid.” Regardless of the outcome, the team’s accomplishments so far, especially those of seniors Rafferty and Joseph Kuo, have shown how strong and dynamic this team is.

“If I could describe the entire season with one word it would be resilience,” said Jordan Bonner ’19. “We have been through a lot as a young team, and I am impressed with the way we responded in the moments when we were tested. A lot of the credit goes to our coach but most importantly our amazing seniors who put us in positions to be successful from day one. I couldn’t have asked for a better group of guys to play with. Now, my only hope is that my journey with this team continues and that we get an at-large bid to the NCAA tournament.”