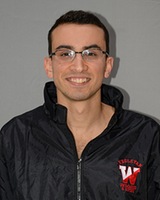 The men’s swimming and diving team competed in the NESCAC Championship meet this past weekend, hosted at the Wesleyan Natatorium. Unfortunately for the Cardinals, they could only muster a ninth place finish out of 11 teams, capping a tough regular season where they finished below .500 in dual meets. Williams won its 15th consecutive men’s championship at the event with Amherst coming in second and Tufts in third.

Though the team didn’t find much success in dual meets this season, the Cardinals will look to build on some of the weekend’s best races. Indeed, the men came away from the meet with several new team records, the result of strong performances from the underclassmen.

Starting on day one of the meet, the 200-yard freestyle relay team of Quinn Tucker ’20, Ali Pourmaleki ’18, Alex Kapphahn ’19 and Spencer Tang ’18 finished in seventh place with a time of 1:24.27. The 400-yard medley relay team, consisting of the same swimmers, touched in at eighth place with a time of 3:28.40. Another highlight from day one was Ethan Chupp ’18 finishing in fifth place in the one-meter diving event with a score of 378.30.

Tucker, a first year from Evanston, Ill. has had a strong first season in the pool. He has consistently been a top performer for the Cardinals in both the freestyle and the backstroke.

“I was really excited for the NESCAC meet,” Tucker said. “Even though we finished in ninth, we broke six varsity records and had a really good meet overall.”

On the second day of the meet, the Cards tallied several more strong performances. Spencer Tang ’18, Alan Huh ’20, Max Distler ’18 and Nate Courville ’17 finished 11th in the 200-yard medley relay with their time of 1:39.20. Additionally, Kapphahn claimed eighth in the 100-yard butterfly with a time of 51.35, while Pourmaleki edged his teammate out with a time of 50.61. The team put in another strong performance in the 800-yard freestyle relay as Pourmaleki, Kapphahn, Aidan Winn ’18, and Tucker finished in sixth, touching the wall at 6:56.66.

Courville, a senior captain, was happy to be able to compete in his last college swim meet at home.

“I [am really happy] that the men’s NESCAC championship [was] hosted at Wesleyan this year,” he said. “We have such an incredibly facility here at Wesleyan and I could not think of a better way to end my swimming career than to compete one last time in our home pool.”

On the third day, the Cardinals had their first NCAA qualifier. Pourmaleki qualified for the NCAA Championship with a ‘B’ time in the 200-yard butterfly event, finishing second with a time of 1:50.06.

Chupp had another strong event, finishing in seventh place in the three-meter diving event with a score of 356.80. Finally, the 400-yard freestyle relay team of Pourmaleki, Kapphahn, Tucker, and Tang finished in eighth place, touching the wall with a time of 3:00.94.

“The success this year I really think comes from the team,” said Tucker. “We are all super supportive of each other in and out of the pool. If we weren’t so close we wouldn’t have made any progress this year. Next season I want to improve my sprinting so I can be even faster on the relays and individually.”

Though the team will undoubtedly miss this year’s seniors, its strong crop of juniors (one of whom will be competing at NCAA Championships next month) will likely prove successful mentors for the talented underclassmen next season. The combination of upperclassmen leadership and underclassmen talent bodes well for the team come November 2017.

“I’m really excited for next season,” Tucker said. “The team is building and we are getting better every year. It’s a great group of people and we are always improving. Though we spend a lot of time together in the pool, my favorite part of the season is spending time with the team away from the pool. Our faces are submerged in the water most of the time at practice but when we all get together it’s always a blast.”

The season is over for most of the Cardinals, but Pourmaleki will be competing in qualifying at the NCAA men’s swimming and diving Division III Championship. The meet will be held March 15-18 in Shenandoah, TX, and will feature some of the nation’s top aquatic athletes.