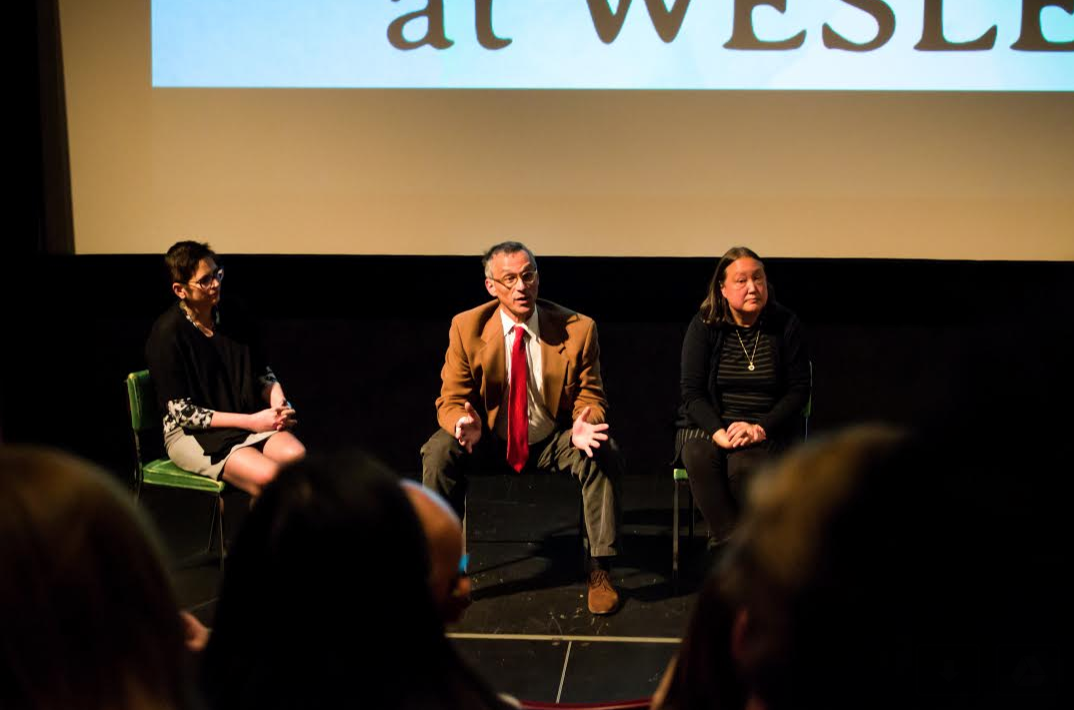 The University’s theater majors held a town hall to discuss the current state of the theater department with faculty, administrators, and students, on Monday, Feb. 13. Senior representatives Cheyanne Williams ’17 and Jess Cummings ’17 led and organized the event.

Last year, Yuri Kordonski, former Chair of the Theater Department, left the University for a job at the Yale School of Drama. As a result, Dean of Arts and Humanities Ellen Nerenberg filled the place of Kordonski as interim chair of the Department. Nerenberg has never been involved in theater at the University, nor does she have any experience in the field. Since she has been chair, the department has not held any faculty meetings. In that same year, both Professor Emeritus Jack Carr and the Artist-in-Residence Leslie Weinberg retired, leaving the Theater department with only two full time faculty members.

Theater students called for this discussion because the Theater department, as described by Williams and Cummings, is in receivership. This means the department has no tenure-track professors, no gateway courses to the major, and only two tenured professors when it should have four tenured faculty members, one tenure-track professor, an artist-in-residence, and a chair of the department. The student theater population has also grown; there were nine majors in the class of 2016 and now there are approximately 20 in the classes of 2017, 2018, and 2019.

The town hall began with Williams and Cummings addressing the administrators as well as the audience at large.

“The theater majors, after much discussion, decided that we needed a place to bring to light exactly what we’ve experienced over the past few years in our department,” Williams said. “Specifically regarding our department’s treatment within the University, including change or lack of change that hinders not only declared majors and upperclassmen, but years of potential theater majors should inaction remain the status quo.”

Cummings and Williams then invited six student representatives to the stage. These students gave brief testimonials regarding their experiences within the department.

“I found a home in the Theater department here that makes me love being on campus and really excited to go to class,” said Madeline Ulevich ’19. “Being a part of Wesleyan’s incredible theater legacy has been an honor and a privilege, and I sincerely hope that I can continue to learn and grow during my next few years here.”

The next student representatives consisted of other theater students passionate about the Theater department. One even addressed University President Michael Roth himself.

“Wesleyan prides itself on well rounded students, students who think creatively and critically,” said Jordan Tragash ’18. “In my time here, I’ve found that this department teaches that more than any single aspect of this school. This department represents what Wesleyan stands for, and what Wesleyan is. It’s about acceptance, it’s about learning, it’s about keeping people safe, and letting them discover who they are.”

The Town Hall continued with alumni speaker Nick Benacerraf ’08. He spoke about his time as a student, and cited his grievances about the treatment the Theater department experiences within the University.

“We hope that our letter is only one of many from alumni that demonstrates the depth and breadth of work that the Theater department has inspired and facilitated,” Benacerraf said. “Its place among Wesleyan’s broader liberal arts curriculum is vital. Leaving the Theater department with only two full-time faculty and being unable to offer Acting I, Theater History I and II—which are the gateway courses to the major—is unacceptable. It does a disservice to the department, potential majors, and the larger integrity of the University.”

Williams and Cummings proceeded to lead the audience in a question-and-answer discussion between Roth, Nerenberg, and Provost Jacobson.

“To the administration in the room, is there a current plan in action to get a chair for the theater department and if not, why?” Williams asked.

“When things are drastic such as a receivership, something happened,” Jacobson said. “It’s not just that people retired or left or that Yuri went to New Haven, but something else is going on. Now here, of course, I have to be the administrator at this point and say I can’t tell you everything that’s going on because personnel matters for faculty and staff are very challenging and fraught with issues. They’re not things that can be talked about in a public forum like this. And that’s just how it has to be.”

Provost Jacobson continued by saying that the administration would be grateful to have a chair of the Theater department, but until they deal with issues underlying the surface, they cannot hire a chair.

“This is not to sound rude at all,” a student in the audience said. “But in your [Provost Jacobson’s] answer, you said that yes, we will have a chair, but I think that we know we will eventually have a chair. I think the question was, is there a plan for us to have a chair? I’m wondering if the plan won’t be in effect until we solve the faculty issues, or is there a plan in effect to bring a chair in as we’re trying to figure that stuff out?”

President Michael Roth then stepped in.

“This has nothing to do with austerity,” Roth said. “It’s not like we’re trying to save money. This would be a dumb way to save money. We need to bring resources so that students have access to those gateways courses, have access to senior projects, and to do that with ongoing faculty who have a commitment to students and who are paid adequately and with adequate benefits…. This is about trying to deal with complex issues that have evolved over time in the department, while bringing more resources.”

Students also stated their anxieties about keeping theater professors from leaving the University and their fears of not receiving the theater education they thought they were paying for. Students also demanded a more concrete plan regarding hiring a chair.

“I don’t have a question, I just thought I would speak up as one of the teachers in the department,” said Hudes. “We did meet last week, and just kind of checked in with each other. The non-tenured track faculty and the tenured-track faculty were just all in a room together and the feeling in that room was not dislike what’s been expressed here, which is just our enthusiasm and excitement and hunger to get a leader in the Theater department…. We have that same goal too, of getting a chair as soon as possible. July 1 would be very exciting.”