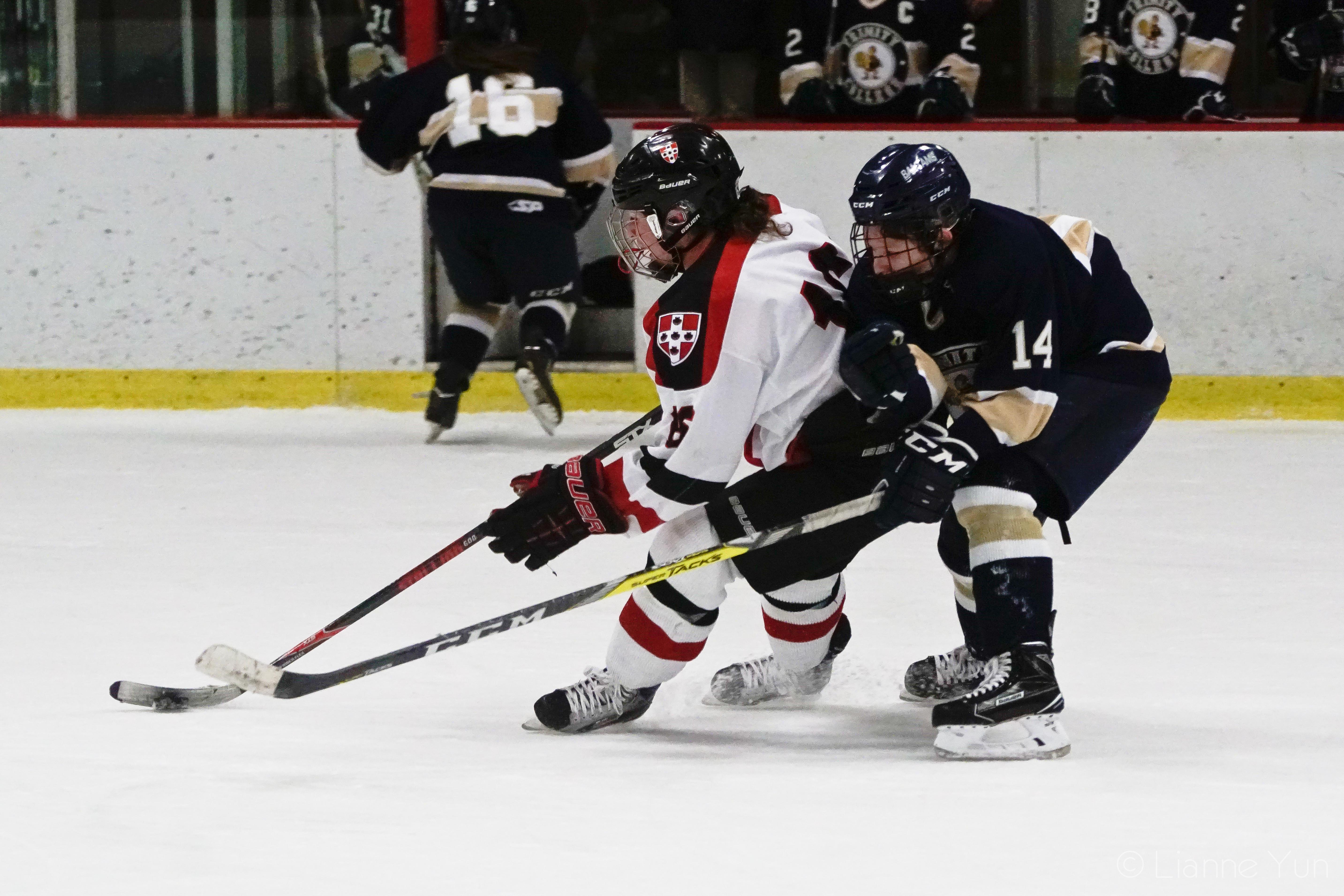 The women’s ice hockey team played its penultimate games of the season this past weekend, falling to Trinity by the same score of 2-1 on both Saturday, Feb. 11 and Sunday, Feb. 12.

On Saturday night, the team capitalized on its home advantage and quickly got a goal on the board. Just 41 seconds into the game, Cici Frattasio ’18 skated down inside the Trinity zone and snuck a beautiful backhanded shot past Trinity goalie Sydney Belinskas.

The Cards would hold their lead until 10:07 of the second period, when Bantams’ star Melissa Maffeo sniped a top-shelf shot right over the glove of Allegra Grant ’20. This was Maffeo’s fourth goal of the season.

Once again, the Bantams would get past Wesleyan and Grant with another high-reaching shot. Kelcie Finn of Trinity found space over Grant’s shoulder to score the game-winning goal at 13:58 in the third frame. In an attempt to tie the game, Wesleyan pulled Grant late and applied more pressure, but the team’s efforts proved fruitless. At the buzzer, Wesleyan’s Route Nine rival remained victorious, 2-1.

Wesleyan then traveled for the first time since winning a weekend series against Hamilton at the conclusion of winter break. However, the team’s previous luck away from Spurrier-Snyder Rink did not seem to stick. Facing the Bantams in Hartford, the Cards played a Sunday game resulting in the same 2-1 defeat the team suffered just one day before. Just as with the previous contest, the Cardinals did not go down without a fight, but their efforts ultimately came up short.

Similarly to Saturday’s game, the Cards got on the board early with a goal from Ellery Sarosi ’17, assisted by Frattasio and Abigail Rutt ’17. Once again, Trinity would strike back with a tally from Maffeo, who tied the game with only one second remaining in the second period.

Wesleyan continued to supply a unified defensive force and didn’t create any opportunities for another Trinity goal in the final period. However, the Cardinals were also unable to find the back of the net.

After a 1-1 finish in the third period, the game continued into overtime. The Bantams netted the winning goal with 3:49 gone by, courtesy of Trinity’s Olivia White.

Despite a weekend of tough, close losses, there were successes for Wesleyan that are not to be overlooked. After a season of serious defensive strengths, Grant continued her power in goal and made numerous saves–51 this weekend alone. Although Trinity managed to put more goals past her than she’s used to, her save percentage remains extremely high at .949 overall and .951 in the conference, which is good for third in the NESCAC. 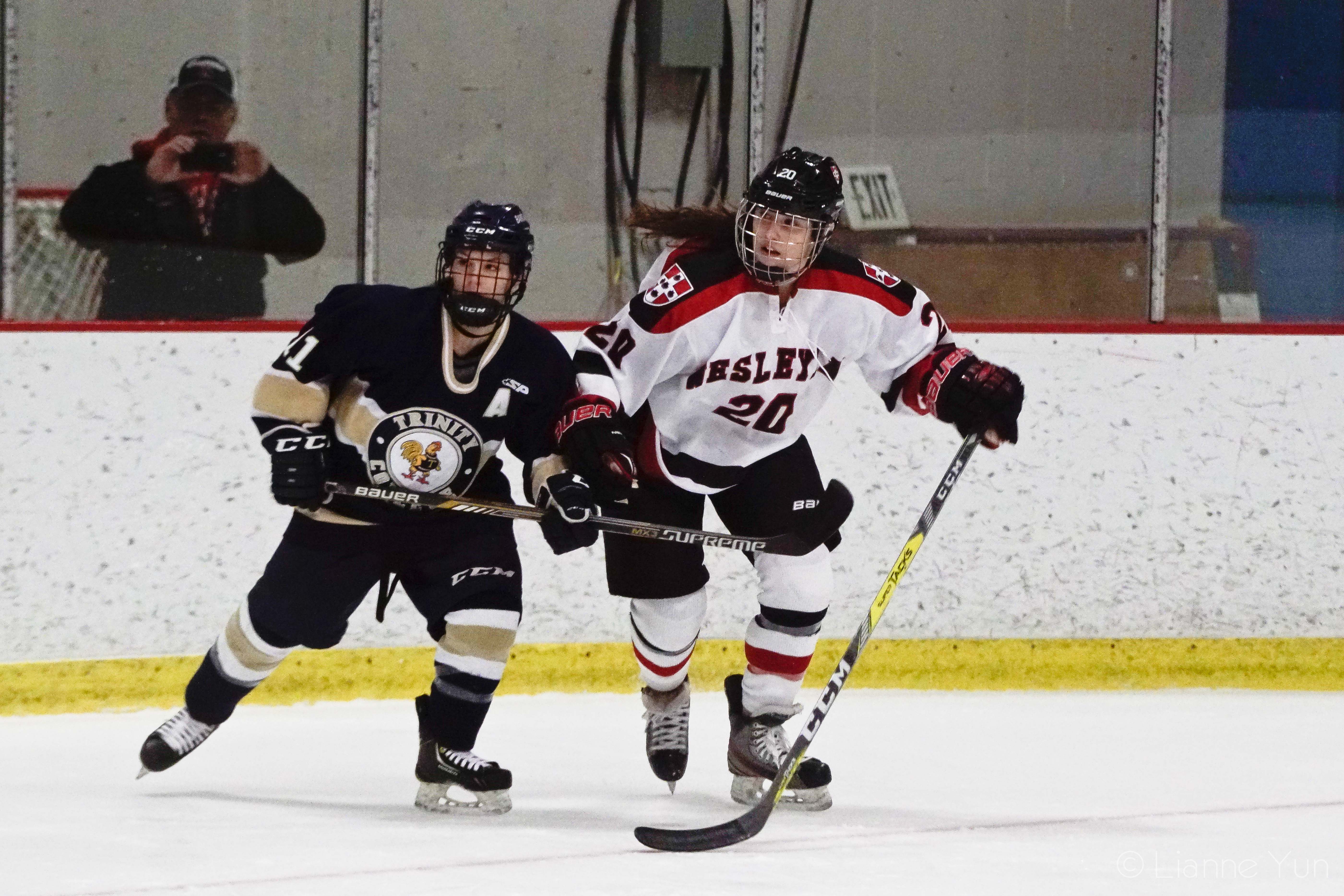 On the offensive end, Frattasio racked up even more points this past weekend. After a goal and assist, she continues to lead the team with 12 points, split evenly among goals and assists. This marks a great development for Frattasio, who has doubled her assists from last season and put some goals on her record. Rutt, also playing at a higher level than she did last year, follows her with nine points, including a goal by Sarosi that both she and Frattasio assisted during Saturday’s game. That goal was Sarosi’s fourth of the season.

Wesleyan has only one more weekend to continue these personal achievements. This Saturday, Feb. 18, the Cards will face off against yet another NESCAC opponent, Amherst, at Spurrier-Snyder Rink. They’ll complete their last weekend series at Amherst the next day, Sunday, Feb. 19.

Playing Amherst gives Wesleyan another chance to make strides in the Little Three. Earlier in the season, the Cards fell to Williams in a weekend series, suffering tough 4-3 and 2-1 defeats, similar to the outcomes of previous years. Wesleyan has lost just above half of its games against Williams since 2011.

Whether the team ends next weekend with wins, ties, or losses, they’ll be sure to mourn the departures of graduating seniors. The class of 2017 makes up almost a fourth of the team, including three of the top five offensive players of this season: Rutt, Sarosi, and Jess Brennan ’17. Over the course of the 2016-17 season, the seven seniors have contributed 20 of the team’s 37 goals scored. Throughout their entire careers, they have totaled 143 points.

Defensively, the Cardinals will hold on to their top two goalies, Grant and Sam Smith ’20, who have made a total of 636 saves this season.

The Senior Day celebration honoring the seven seniors will take place this weekend before the team’s final home game. Saturday’s game against Amherst begins at 3 p.m.