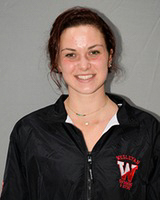 The women’s swimming and diving team competed at the NESCAC Championship this past weekend, hosted by the Bowdoin Polar Bears in Brunswick, Maine. Though the team finished in seventh place out of 11 teams, the Cardinals are happy with how their season went, having shown marked improvement from past years. A successful conference meet has been a primary goal for the Cardinals since the beginning of the 2016-17 campaign.

“Our end goal is NESCACs,” captain Serena Zalkowitz ’17 said before the meet. “We’re practicing a lot more than we have in the past, and I’m excited to see how the team does at NESCACs.”

The hard work showed at the meet with many Cardinals excelling in their individual races. A notable standout was first-year Caroline Murphy ’20. Hailing from Gardiner, N.Y., Murphy has been flourishing all season, particularly on relay teams and backstroke races. At the NESCAC meet, Murphy won the 50-yard backstroke race with a time of 26.68 seconds, and finished second in the 100-yard backstroke event.

In addition to the team’s success in the pool, head coach Peter Solomon was named NESCAC women’s swimming coach of the year, a testament to the improvement the team has seen since last season.

“My favorite part of swimming is most definitely the team,” said Murphy. “They care so much and have pushed me to be the best I can be. Both the men and women support each other so much and I am so, so happy to be surrounded by them, and to be a part of the team.”

Though she wasn’t expecting all this success so quickly, Murphy isn’t fazed by being thrust into the spotlight so early in her college career.

“It was kind of surreal,” Murphy said. “I really did not expect to win as a first year but I trained so hard over the past couple of months. I felt it was well deserved.”

Murphy’s success on day one of the meet found its spot in the program archives as well. Both her 50- and 100-yard backstroke times set school records along with the 400-yard medley team’s final time. In addition to these records, the 200-yard freestyle relay team of Kerrich, Murphy, O’Halloran, and Sophie Antonio ’19 also set a school record and finished seventh at the meet.

The hard training of the Cardinals this season also helped other swimmers find success over the weekend. Maela Whitcomb ’19 took home seventh place in the 1000-yard freestyle event. O’Halloran finished seventh in the 200-yard backstroke race as well. Also adding to the strength of the relay teams was the 400-yard freestyle relay team. The team, comprised of Kerrich, O’Halloran, Murphy, and Grace Middleton ’20, placed sixth overall.

Zalkowitz was confident heading into the meet, and many of her predictions about what would happen in the pool came true.

“I’m confident that we’re going to have many finalists, several broken records, and hopefully a few NCAA qualifiers,” Zalkowitz said. “We’re definitely all excited for our relays’ chances at making nationals.”

Murphy, O’Halloran, Kerrich, the 400-yard medley team, and the 400-yard freestyle relay team all qualified for NCAA’s under the “B” cut qualifying times. All of the hard work that the Cardinals have put in this season manifested itself at the championships.

Kerrich had a breakout performance in the 100-yard breaststroke “A” heat, touching the wall in a time of 1:03.76, shaving off six seconds from her seed time.

Something that Solomon certainly takes pride in, along with the in-pool success, is the success the team sees in the classroom. The women were named to the College Swimming and Diving Coaches Association of America Scholar All-America teams for posting a team GPA above 3.0 for the fall semester. The men’s team was awarded this honor as well, a testament to the ability of the coaches and athletes to take athletic performance seriously without sacrificing academic success.

The Cardinals’ swim season isn’t over yet. The men’s swimming and diving team will compete in its own NESCAC Championship meet, hosted at the Wesleyan Natatorium from Feb. 17 to Feb. 19. After that, the NCAA Division III Championships will take place in March for the athletes who qualify.