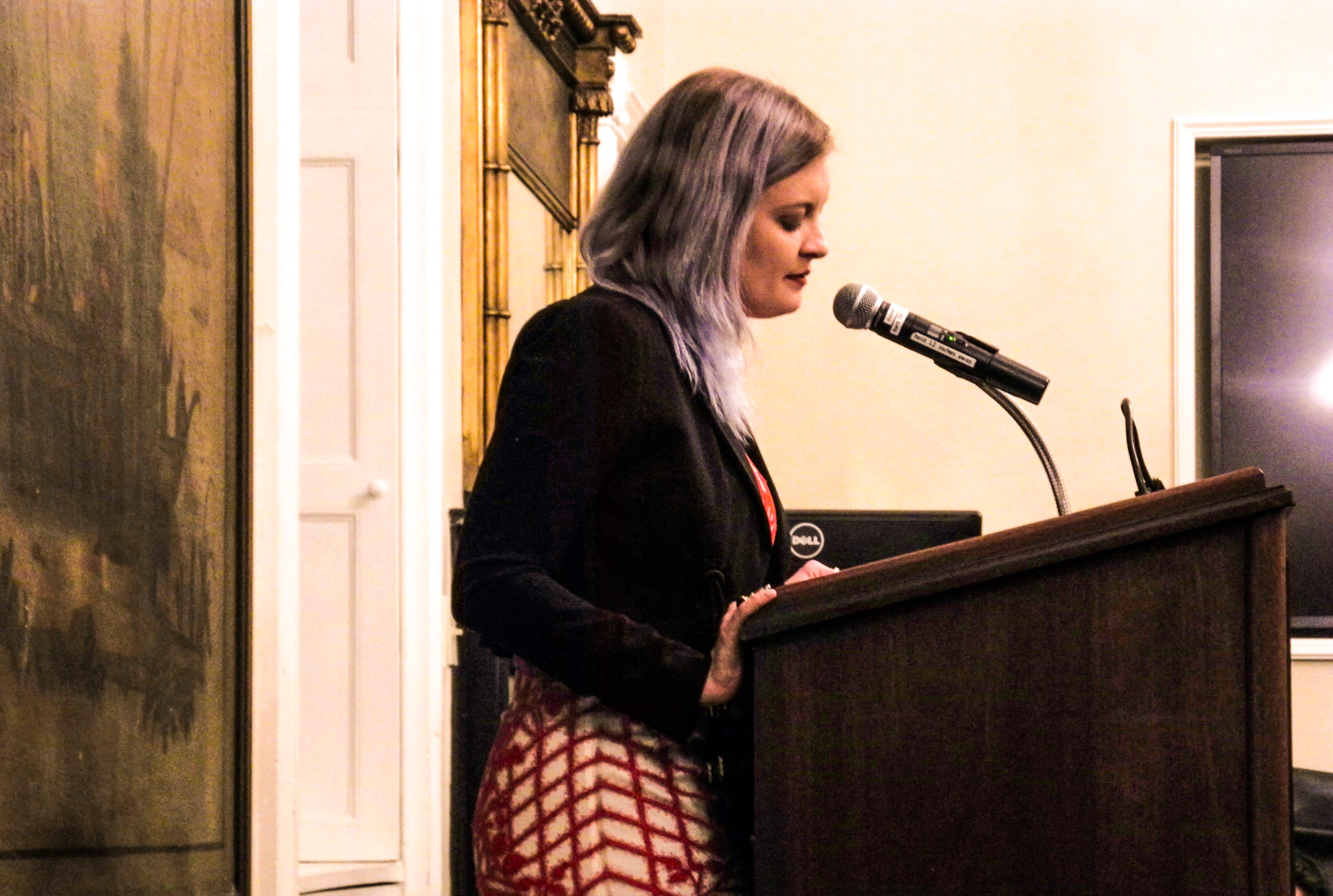 Locascio’s reading did not confine itself to sex but rather used the explicit discussion of it and intimacy to communicate broad themes concerning love, desperation, and desire. She opened with a translation from a section of Ovid’s “Metamorphosis.” Locascio’s translation was free (i.e. not word for word) but did not domesticate the epic by interjecting modern tastes or styles. What surprised me was how this unperturbed preservation of the work felt so real and relevant. The translation demonstrated that Ovid’s verses, such as “[feeling] more mist than woman” and “[I] wanted to want nothing” cannot be restrained to an era.

This first poem quickly turned to ideas of rape and contemplating sexuality. From this turn Locascio segued into her own sexually explicit work. With titles such as “Some Dumb Shit I Found Sexy,” Locascio casually swept aside any superego barriers that normally forbid descriptions like “come until I lost consciousness, and I wrote until I couldn’t breathe.” For me, the discomfort I felt at first cleared quickly, mainly because Locascio didn’t really give any other choice.

Yanique followed, taking a moment to extol the abundant coming in Locascio’s work. She said that the discomfort in the crowded room is what good literature does.

Yanique’s first reading was called “African Animal” and depicted a male desperately trying to begin a family. The poem felt terrifyingly human, striking deep into our animalistic roots. As the bull competed with his “sons and brothers” to begin his family, love felt like a distant fantasy. It felt as if the bull’s desperate urges turned love into a luxury, something that was not for him.

Her next reading was from her 2014 book, “Land of Love and Drowning.” As Yanique told the crowd, the selection she had chosen was a story told by her grandfather, a Black man who had been drafted into the Korean War.

The story took place in New Orleans, where her grandfather had been stationed for part of the war. It featured “three island soldiers” on their “belly-hungry” night out in the city. Yanique’s description of these soldiers was extraordinary. Her scrupulous detail of the men’s lips and crisp uniforms sounded like poetry and made me feel like I was sitting down with them when they went in a restaurant called “Mama’s Place.”

At “Mama’s Place,” the men waited over an hour to be served as a white waitress kept flitting by them. Here, the story centered on Jacob. As Yanique told, growing up in an all-Black neighborhood and going to an all-Black school, Jacob had only ever heard of Jim Crow.

When Jacob whistled at the waitress to get her attention, the rest of the customers went silent. Several of the restaurant’s large white men approached the table and threatened the men to leave, calling them a racial slur.

The story ended curiously, with the three men being forced out and hopping onto an army convoy of white soldiers who made room for them. This finish made one consider the cruel irony of the Black soldier’s place in America. For me, the most painful part of this story is that, for Jacob, it was educational.

This introduction of the reader so intimately to racial tension was very similar to the effect of one of Yanique’s short stories that was not read that evening, “Oakland Gomorrah.” This story depicts a young couple, a white girl and a Black boy, fleeing across the South from a supposed apocalypse. In it, we see their young love mixed with the stark racial tension that defined the country they raced across.

Both Locascio and Yanique come to the University with a wide array of awards and honors. Locascio is currently working as an editor for an anthology, “Golden State 2017: The best New Fiction and Nonfiction from California,” which is scheduled to be published in 2017 by Outpost19 books. Her novel “Jutland Gothic” will be published by Grove Atlantic in 2018.