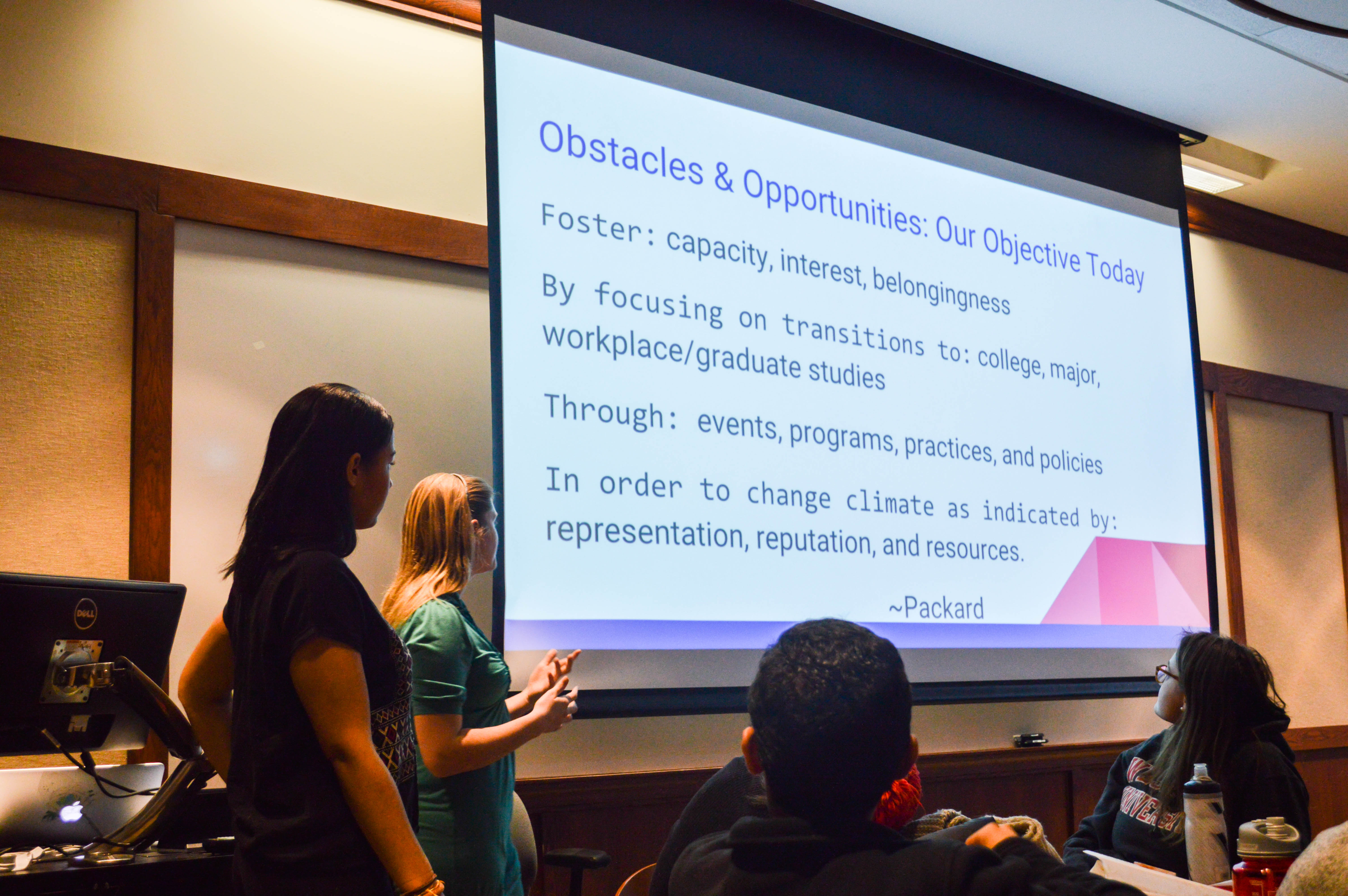 With a line out the door, the NSM (Natural Science and Mathematics) Coalition held its third meeting this Tuesday in the Woodhead Lounge. All of the Coalition’s meetings have drawn more people than the facilities could accommodate.

“We outgrew the Usdan 108 room, we have outgrown the Woodhead Lounge, which speaks to the urgent need for this community to be having these types of dialogue,” said Kati Young ’19, a leader of the Coalition.

The NSM Coalition is an amalgamation of the Society of Underrepresented Students in STEM, Women In Science, the Math and Science Scholars Program, and the McNair program. The initiative was spearheaded in November of 2016 when Professor Ishita Mukerji presented jarring statistics about the demographic breakdown of the University’s science students and faculty.

Data from the Office of Institutional Researched showed that only 16 percent of the tenured NSM faculty identify as female, compared to the national average of 41 percent female PhD recipients in the natural sciences. The makeup of undergraduate students at the University is similarly skewed. With respect to gender, race, and income, the inclusion of NSM departments falls below university averages.

Though the Coalition focuses on imbalances throughout all departments in STEM, it is also important to note that several departments within STEM heavily weight these numbers: Astronomy, Computer Science, Math, and Physics. In these four departments, from 2009-2013, only 23 percent of undergraduates identify as female and 2.5 percent identify as African American. If these four majors were excluded from the overall NSM statistics, 54 percent of NSM majors would be women, similar to the university average. However, even by excluding these four majors, only 4.6 percent of NSM majors would be African American compared to the 7 percent African American university average.

Not only are the demographics of many majors skewed, but the GPAs of different racial groups also vary drastically. Wesleyan’s Office of Institutional Research reports that 95.9 percent of white Natural Science majors graduated with a GPA of 3.0 or higher between 2012 and 2016. Of underrepresented minorities, only 65.1 percent graduated with the same GPA.

Is the University teaching its courses in a way tailored to the success of privileged white students? The Coalition says yes, and is actively pursuing proposals that address these issues.

“Everyone assumes that if you come to this school, you went to a top private school and your whole life you’ve had tutors and all this training,” explains Leah Cabrera ’17, a leader of the Coalition, and a math and American Studies double major. “But that is not true at all. For example, myself, I went to a public school in New York City, and I made it to the top ten of my school and did really well, but when I arrived to college it was just not the same playing field. It’s not my fault—I just didn’t have access.”

At the table discussing introductory course restructuring, undergraduate leaders noted how introduction classes were being taught in ways that are exclusionary to minorities. Professor Mukerji explained how time and time again, studies have shown that active based learning models are proven to be the most equitable to all backgrounds of students. While the evidence exists, professors are still reluctant to adopt these teaching methods.

“With an increasingly emphasis on problem based learning or active learning in the classroom, you do have to sacrifice some content,” said Mukerji. “So it’s always a balance between the breadth and the depth. I think some professors naturally think the whole field is important, I mean of course we think that. So we want to have the breadth. I think the problem is that student retention of the knowledge is” she paused and chuckled, “is low. That’s why it makes sense to sacrifice the breadth. The content retention is better if you can do more of this active based learning.”

The Coalition meeting ended with a list of concrete goals and accompanying undergraduate leaders to work for the fruition of each one. Students and faculty put their names and emails down so that their help could be enlisted to enact many of the newly proposed projects. While many ideas and potential actions were discussed, the leaders of the Coalition emphasized that these discussions had to continue outside of the Coalition meetings. They urged everyone to spread their outrage at the existing inequalities and their passion to bring about change.

“We will continue to grow and to learn and to listen as the Coalition continues,” said Young. “The types of interactions we were able to see today between administrators and TAs and graduate students and undergraduate students need to be happening more of the time. This will not be the end of conversations.”