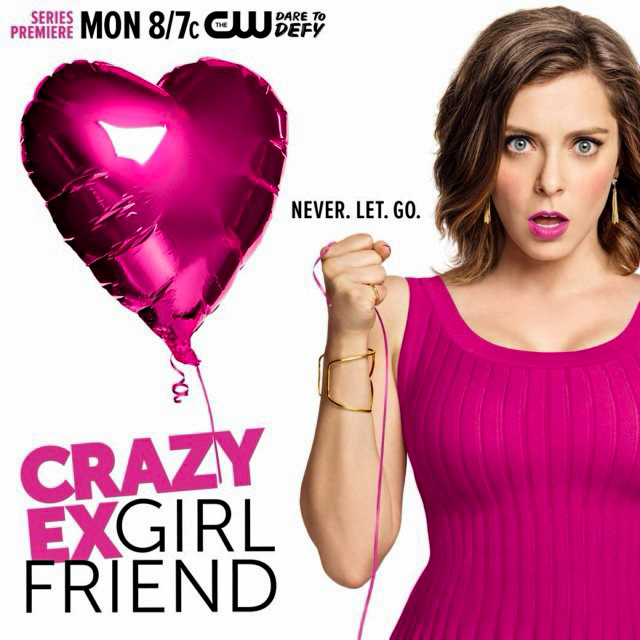 Season 2 of the Emmy and Golden Globe winning TV show “Crazy Ex-Girlfriend” has recently come to a close, giving us—Emmy Hughes ’20 and Meg Cummings ’20—the dire need to sit down and talk about it, stat. Here’s our conversation about the most recent season. Warning: It will contain a ton of plot spoilers.

Emmy Hughes: We recently watched season 2 of “Crazy Ex-Girlfriend” and we’re going to talk about it!  Where do you want to start?

Meg Cummings: The song “Period Sex” is available online; you must look for it immediately.

EH: Absolutely. What do you think of this season generally in comparison to the first?

MC: I thought the jokes and the storylines were just as funny and sharp and heart-wrenching as they were in season 1, but the music had a bit of a downgrade in quality. It could be because I listened to the music from season 1 so many times. I have a playlist.

EH: I would agree. I liked the plotlines a lot this season, and they definitely took the characters in different directions. But in regards to the music, there were a couple episodes where they could have taken songs and maybe expanded on them or developed them differently.

MC: There were better defined emotional arcs this season. Some of them even branched back into the first season, like Paula (Donna Lynne Champlin) and Rebecca’s (Rachel Bloom) relationship, obviously the biggest part of the show. That line reached its climax in the season 1 finale with Paula’s big number “After Everything I’ve Done For You (That You Didn’t Ask For),” and then you’re dealing with the fallout in season 2. It’s a very tight narrative they wrote; there’s not a lot of slack. Also, Trent (Paul Welsh). Any increase in the amount of Trent in a season is such an improvement.

MC: She still latches onto what gives her happiness, however irrational it might be. I feel like she’s doing the same thing at the end of season 2, latching onto the prospect of revenge against Josh (Vincent Rodriguez III).

EH: She needs a driving force.

MC: It’s another form of obsession. Isn’t it a cliche that it’s a fine line between love and hate? At this point, she’s still obsessing about Josh. It doesn’t matter whether she wants to marry him or destroy him.

EH: It’s this constant obsession that gives meaning to her life, and what she needs to discover is that it shouldn’t be the driving point of her existence.

MC: True. Plus, Rebecca’s female relationships that were a big part earlier in the season get a bit shafted by the end.

EH: I get why the loss of her female friendships was a featured point in the plot but I’m like, “These are the relationships that should matter, Rebecca!” I’m trying to tell her that!

MC: It’s like I’m screaming at horror movie victims like “Don’t go in there!” but I’m saying “Talk to Paula!”

EH: And I feel like part of that stems from the fact that once she loses Josh, she relies on the women in her life, and when Josh comes back into her life, she pushes them to the side again.  And I’m hoping season 3 is going to include a revitalized relationship between these women.

MC: Honestly, if that shot of them on the cliff (EH: Iconic!) is the next version of “The Craft,” I am so in.

EH: I totally agree, Meg! So, is there anything else we should discuss?

MC: I think we need to talk about Josh. He’s the other half of this dysfunctional pair. Rebecca is not the only one with issues.

EH: In the first season, Josh is idealized. He’s this picture of happiness; he’s the California dream actualized in a human being. What I love about season 2 is that he has his own underlying issues to address. He’s figuring out whether or not he’s fulfilled and what he wants out of life.

MC: This twist was so rooted in his characterization, though, that I don’t even think you can call it a twist.  He had been moving towards religion, and then they’ve also established his running to the next pretty girl. And they’ve combined them so he’s running away to the next pretty girl, which just happens to a relationship with God.

EH: It’s just gorgeous how it encapsulates everything Josh has been going through. Well done, “Crazy Ex-Girlfriend!” So, onto the music! We were talking about the theme song of season 2, “I’m Just a Girl in Love,” and how when we first heard it we weren’t super into it.

MC: Right, I mean I thought you could never go wrong with, “I was working hard in a New York job, making dough but it made me blue…”

EH: It’s so true! The theme song of season 1 was so classic!

MC: Right! But later, I loved the season 2 theme song. It’s like, she’s in love now, so she’s fine, and you can’t tell her that she’s not fine, because she’s in love now, and she’s doing it all for love. It came out very explicitly in the finale, in that it was the same excuse that her mother gave to the court, the classic “She’s just a girl in love; she can’t be held responsible for her actions.”

EH: Exactly! I’d like to touch upon this: the continuous use of throwbacks to songs that have appeared in previous episodes throughout the entire show. There’s so many, and they’re beautifully used!

MC: For example, when Rebecca and Nathaniel (Scott Michael Foster) are in the elevator and there’s all this sexual tension, the theme “We Should Definitely Not Have Sex Right Now,” from when Rebecca and Josh were getting together earlier in the season, begins playing.

EH: And it mirrors that cyclical, repetitive aspect of this show, and how people will fall back into old themes and old behavior patterns.

MC: Right, which really is Rebecca’s thing: those unhealthy patterns.

EH: It’s her thing! And we know she envisions her life as a series of musical numbers, so using those musical numbers to represent the patterns that she’s continuing to fall into is such a cool move on the part of the creators of “Crazy Ex-Girlfriend!”

MC: So, are there any songs you like particularly?

EH: You know, I generally really love whenever Greg (Santino Fontana) sings. He’s just such a excellent singer! This season, I especially loved “It Was a S*** Show.” I replayed that song over and over again, and now I have it memorized. And then there’s the iconic “The Trent is Getting Ready Song.”

MC: “The Trent is Getting Ready Song!” It’s only 29 seconds long, but they were the best 29 seconds of my life.

EH: (Laughing heartily) Yes! Oh, Trent. I’d like to end just by saying: what a great end to this season in that finale. Rebecca’s on the brink of destruction in the last few moments of that last episode, but the women in her life bring her back.

MC: Paula brings her back, Valencia (Gabrielle Ruiz) and Heather (Vella Lovell) are there, the women in her life continually are there for her. I’m more than willing to watch them plotting to bring Josh Chan down. I know it’s not healthy for Rebecca, but I really want to watch them destroy Josh Chan.

EH: Oh my gosh, me too! And come September of 2017, which feels so so far away, we will. In the meantime we can always rewatch episodes (both seasons available on Netflix by Feb. 11!) and listen to the albums on Spotify.