Women’s Basketball Fights to Stay Competitive in the ‘CAC 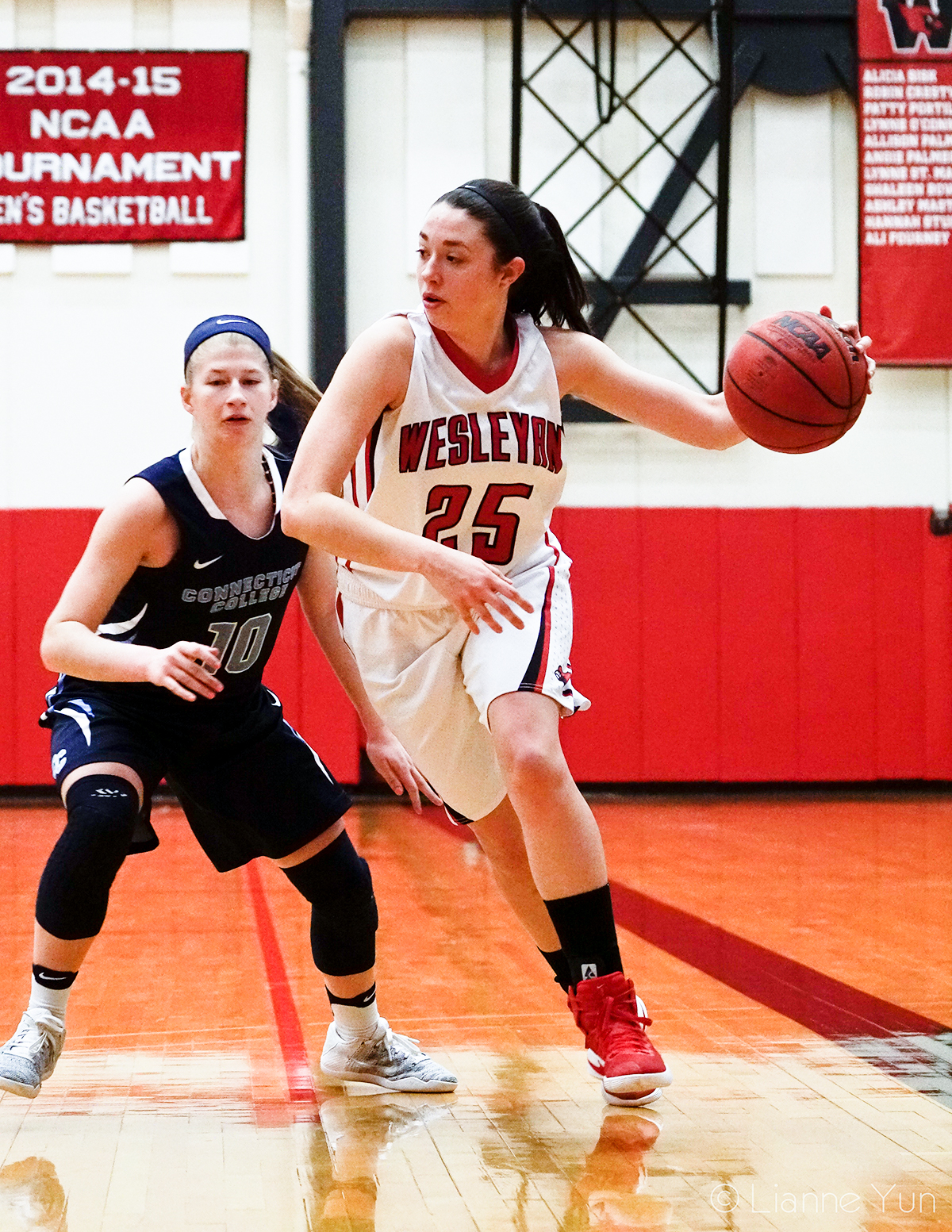 Throughout the break, the women’s basketball team was hard at work with games at the end of 2016 and throughout the month of January, yielding a 7-12 overall record for the season so far. The Cardinals are also looking forward to a potential playoff berth.

The Cardinals ended 2016 with a win and a loss at the WPI Holiday Tournament in Worcester, Mass. They faced off against Bridgewater State University on Dec. 30, cruising to a 73-51 win after a strong game. Maeve Vitale ’18 scored 16 points throughout the game and scored 12 out of her 16 during the fourth quarter, securing the team’s victory.

On New Year’s Eve, the Cards faced off against Worcester Polytechnic Institute at their home court, ultimately losing the game 49-54, despite a halftime lead. The Cards caught up to even the score in the first half at a 20-20 tally, eventually securing a 31-30 halftime lead. In the second half, even with a strong showing with big free throws from Tara Berger ’19, the home team secured the win. Olivia Gorman ’19 scored a team-high 15 points in the loss, with Berger grabbing nine rebounds.

Returning to an empty campus in the new year, the Cardinals opened their NESCAC competition against Middlebury on Jan. 6, losing the game in spite of a strong initial effort. Wesleyan started off with a 7-0 lead in the first two minutes of play, but the Panthers caught up with an 8-0 run of their own, securing a 39-32 halftime lead. Ava Tompkins ’20 provided a spark at the start of the game with three consecutive three-pointers, followed by a lay-up by Kadijah Mathews ’18. The Panthers ended with a 76-63 win. The loss came with a silver lining: Berger did work inside en route to 19 points.

The next afternoon, the Cardinals battled Hamilton, ultimately losing in the closing seconds for a 48-46 loss. The team started strong in the first half, securing a 32-20 halftime advantage. After a back and forth in the third quarter, Chynna Bailey ’19 failed to convert in the paint during the closing seconds of the game, and the Continentals held onto their victory.

The next weekend, the Cardinals continued their NESCAC run against Amherst, which is currently ranked second. The Purple and White provided a strong effort and Amherst cruised to a 71-33 win against the Cardinals. After the first 10 minutes, Amherst quickly augmented its lead to 19-8 and carried the edge throughout the game into a decisive victory. In the contest, Berger continued her hot streak, scoring 12 points, making her the only Wesleyan player to achieve double-figures.

The next day, the Cardinals faced off against NESCAC rival Trinity, with the game concluding in a 74-67 loss. The game was an individual success for Gorman, who tied the Wesleyan single-game program record, scoring 35 points with six three-pointers. After holding a lead in the early portion of the game, the Cards fell to the Bantams, who were led by Courtney Erickson’s 19 points and 8 rebounds. 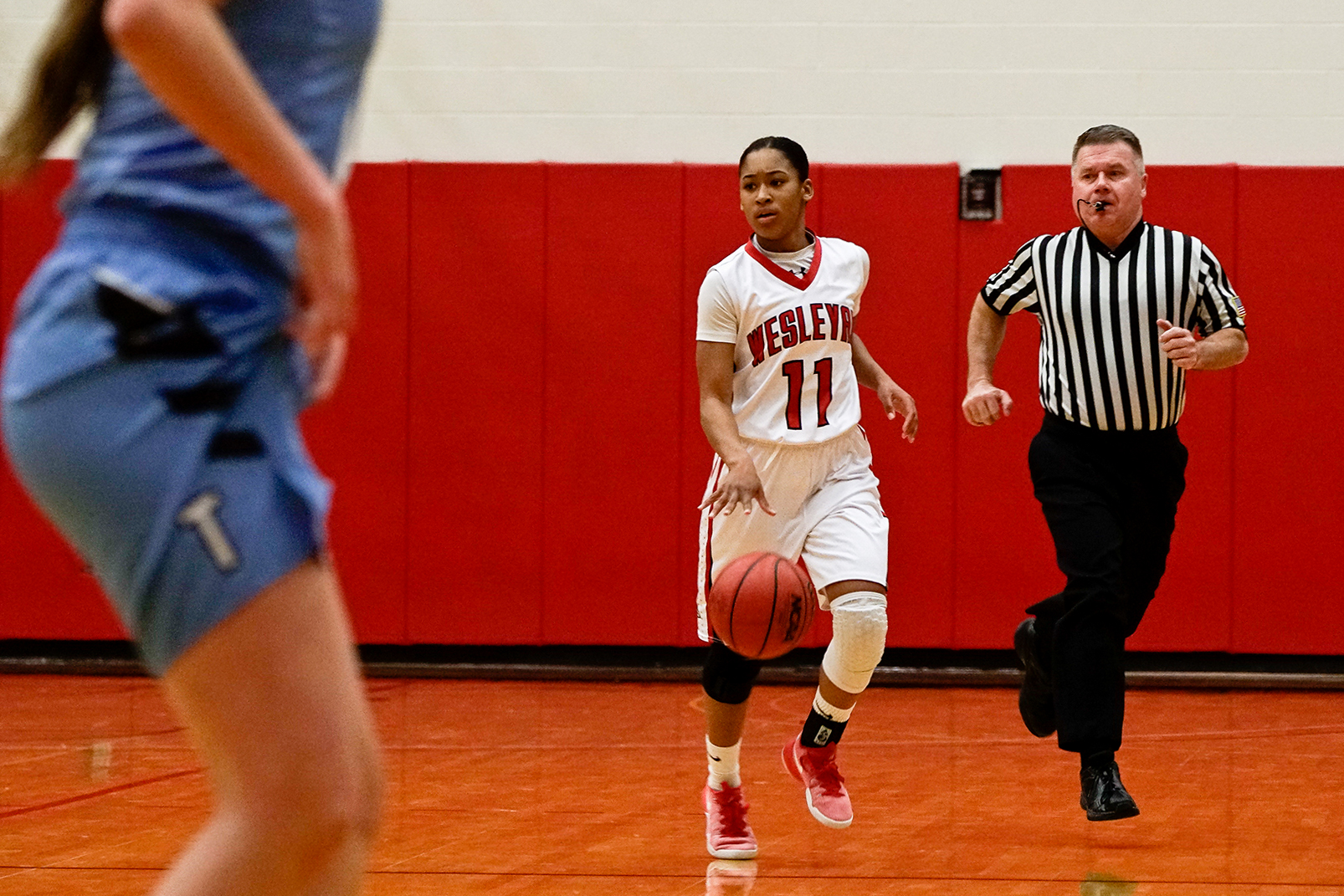 After a rough start to the year, the team resumed its schedule with games against Bates and the top Division III team in the nation, Tufts. The Cardinals fell to the Jumbos, 80-45, despite a strong starting effort by captain Danielle Gervacio ’17. The next day, the Cardinals returned with a home victory against Bates, winning 62-58. The win was a particularly sweet one as it broke a six-game losing streak and marked the 400th win in head coach Kate Mullen’s career. The team rallied from a double-digit deficit to defeat the Bobcats in the second half. The Cardinals had a strong edge in rebounding with a 44-39 advantage.

Throughout the end of the month, the Cardinals faced off against Fisher College in a blowout, winning 82-48, and setting a single-game program record with 14 three-pointers. The team had an offensively potent night, with four players scoring in the double-digits.

In a game honoring seniors Lauren Gaj and Gervacio against Conn College last weekend, the Cards fell 65-58 despite outscoring Conn in the second half. The Camels started off strong and held onto their lead throughout the game despite strong efforts from Bledsoe and Berger. This game marked a 1-6 NESCAC record at the end of January.

The Cardinals ended the month with a game against MIT, falling 54-69 in Cambridge, Mass. Even with Berger’s game-high 15 points and an early lead, the Engineers caught up and achieved a win.

Gervacio emphasized the growth that the team experienced over the break and their hopes to achieve a playoff run.

“One strategy that we have been really emphasizing and looking to capitalize on is having a good start to the game, which will put us in an advantageous position during the final quarter,” said Gervacio. “Hopefully, you will see that from us in these last three games.”

The Cardinals return to the court with a home game today, Feb. 3, against Williams at 7 p.m.