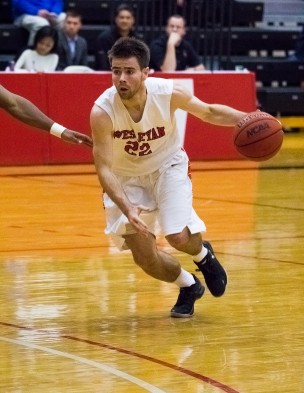 Prior to winter break, men’s basketball seemed untouchable. The team’s 11-0 record, defeat of Williams, and two tournament titles had the makings of a formidable season. In fact, this year was the team’s second best start in 115 years of varsity competition (the only better start was, of course, the 13-0 record in the team’s 1911-12 undefeated season).

However, the team has cooled off since December. January began with three losses, including setbacks to NESCAC rivals Hamilton and Middlebury. While Wes can still boast an impressive 15-4 overall record, its ’CAC standing breaks even at 3-3.

The reason for the sharp disparity in the records is that none of the team’s early wins counted on the NESCAC record, including the win against Williams on Dec. 3. (Wes will rematch its rival on Feb. 3 for a NESCAC game.) Thus, despite an 11-0 record in December, the Cards came back from winter break with no games counting towards their NESCAC record. Unfortunately, the team quickly dropped to 0-2 with the losses to Hamilton and Middlebury on Jan. 6 and 7, respectively.

At halftime against Amherst on Jan. 13, the Cards trailed 23-32 and seemed poised to continue their January slide. Wes rallied, however, scoring an impressive 50 points in the second half to defeat their rival, 73-59. The win gave Wes traction in the ’CAC, as well as the lead in the Little Three rivalry.

The Cards now stand at sixth place in the conference, but this figure is misleading. Amherst, Hamilton, and Middlebury are tied for third place in the ’CAC, all posting a 3-2 record. Thus, at sixth place, Wes trails the third-place teams by less than a full game. Also, the Cards defeated the second place team in the conference, Trinity, in a thrilling 65-61 game on Jan. 14, further demonstrating the NESCAC’s close competition.

Wesleyan’s recent conference games reflect this competition with a 73-77 loss to Tufts on Jan. 20 and a close win the following day over Bates.

Against Bates, the game was even at 62-62 with 1:20 left on the clock when captain Harry Rafferty ’17 hit a three to give the Cards the lead. Bates responded with two to make it 65-64. With :06 left on the clock, Rafferty solidified the lead by making two free throws for Wes to clinch the game at 67-64.

In this game, Rafferty became the fifth player under coach Joe Reilly to reach 1,000 points in his career. Rafferty discussed the team’s focus heading into the remainder of the season.

“The team’s main focus has been on the process of getting better each and every day,” said Rafferty. “We have very high aspirations for the end of the season, but we recognize the only way we are going to accomplish any of our goals is by trying to create championship habits each day in practice that will then translate over to the games.”

Considering the close standings, Wesleyan’s four remaining NESCAC games will ultimately define this season. Coach Reilly reflected on the potential in this last part of the season.

“I’m very pleased with the season so far,” Reilly said. “As usual, it is a very competitive NESCAC conference and it is wide open to who will end up hosting first-round tournament games this year.”

The coach also mentioned the return of Jordan Bonner ’19, who missed of all the December season and the first half of January.

“A lot of different players have stepped up at big moments this year, and we are a very balanced team,” said Reilly. “We are really excited to have Jordan Bonner back on the court after missing some time with a knee injury. He is close to 100%, and he will really help us prepare for the last stretch of the season.”

One of the players who has stepped up in big moments is Joseph Kuo ’17, who commented on the team’s need to continue past its early success.

“I’m proud of where we are as a team, but I think we can still get a lot better,” said Kuo. “I think we as a team are on the same page on what we need to do to go from a good team to a great team, and I’m excited about the last third of our season.”

Reilly ultimately displayed a good deal of optimism heading into the rest of the season.

“I am really enjoying coaching this team,” said Reilly. “They are demonstrating a lot of physical and mental toughness, and that is going to help us tremendously these next three weeks.”

Wes’ next game will be away against conference rival Conn College on Jan. 28. It will be a crucial match-up for the Cards, as the Camels sit close behind in the ’CAC standings at 2-4.

In addition, the induction of former basketball head coach Herb Kenney into the Middletown Sports Hall of Fame and Museum was announced over the winter break. The event will take place on Jan. 26.