Despite Its Strengths, “Summertime” Came Out as A (Hetero)Normative Love Story 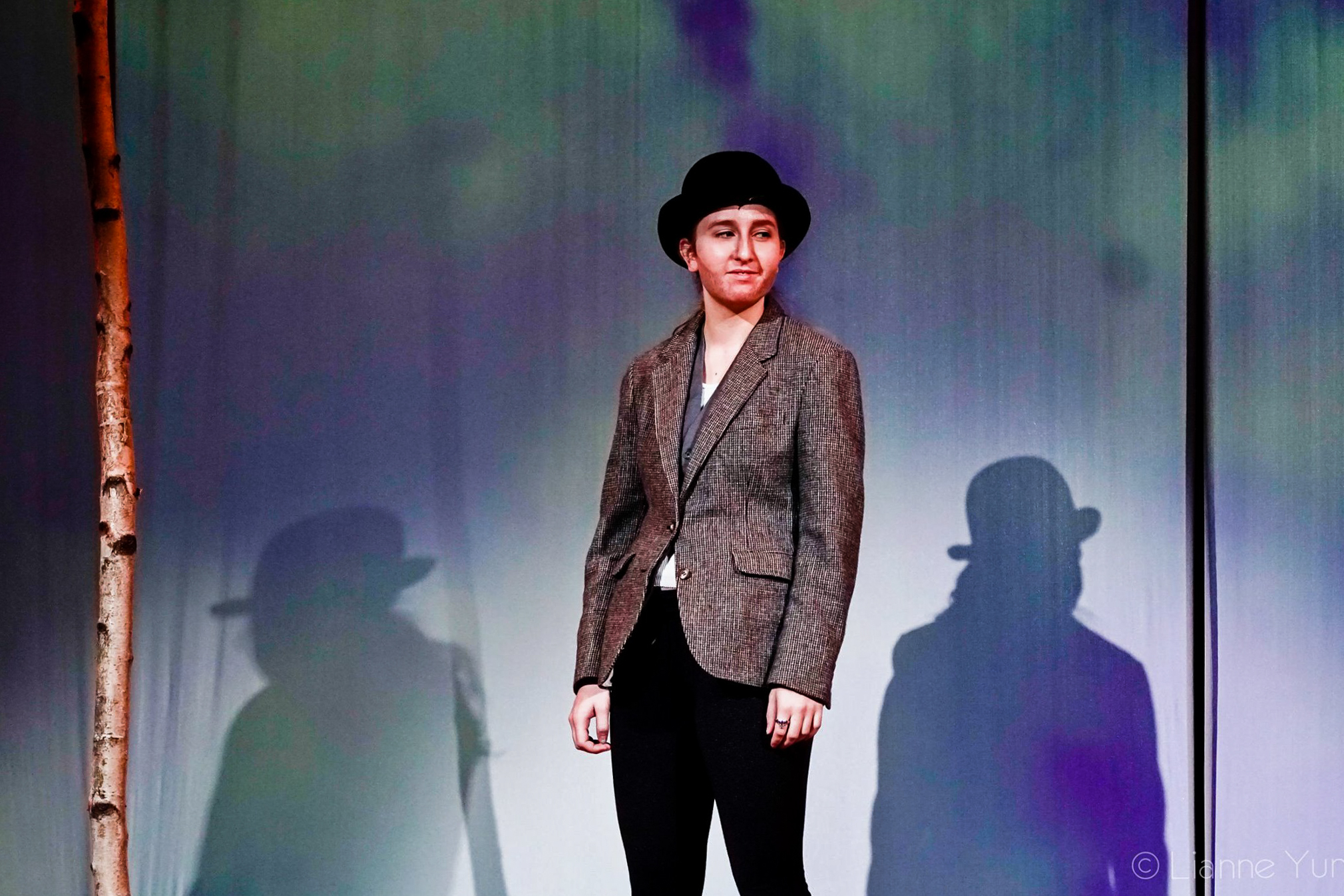 At the beginning of the Wesleyan Theater department’s production of “Summertime,” written by Charles Mee and directed by the Visiting Associate Professor of Theater Kim Weild at the Center for the Arts Theater, a woman is asleep on stage. She wakes up hungover, trying to make sense of what had happened. Then, she gathers the many empty bottles scattered around the stage into a box, and repeats “fuck you” while singing along to the tune playing on her phone. Perhaps this scene could best describe my reaction to “Summertime,” which in spite of its extraordinary acting and ambitious claims to reflect upon our society and show the essence of love, delivered a normative product that misused diversity as a device to reinforce how exclusive and magical love is between its two principal white heterosexual characters.

At its core, “Summertime” is a conventional boy-meets-girl love story. James (Ames Ward ’18) arrives at Martha’s Vineyard looking for a translator to help with some captioned photographs. Tessa (Lucia Proctor-Bonbright ’18) takes the job, but the conversation soon turns into a confusing mélange of topics such as life, love, and sex. James is immediately blown away by Tessa’s charm and beauty. It is love at first sight, but also their inevitable fate. Soon after, they are interrupted by François (Alina Whatley ’18), a stereotypical masculine and irresistible Frenchman, played by a cross-dressing actress speaking in an eerie French accent. Tessa is drawn to François, as if trapped in a magnetic field. James becomes jealous, but remains persistent in convincing Tessa that his love for her is irrefutably true. What he does not know about is the spectacle that follows, as family, friends, and strangers join them on stage in what resembles a daytime TV soap opera aspiring to be the next HBO phenomenon. There is Mimi (Jejomar Erln Ysit ’19), Tessa’s friend who has intimate history with François and Natalie (Samuel Morreale ’19). Maria (Sara Fayngolz ’17), Tessa’s mother, who is also yearning to be with François, and Frank (Ari Golin ’18), Tessa’s father, who has growing feelings for Edmund (Keyonne Session ’17). There is also a cook named Barbara (Sanam Godbole ’19) who deeply despises men, a pizza deliveryman named Bob (Doc Polk ’19) who is a psychotic murderer, Gunter (Gabe Smith ’19) who has pretty much every lipstick color memorized by heart, and Bertha (Vienna Kaylan ’19) and Hilda (Julia Tyminski ’17) as Gunter’s parents.

In spite of my disagreements with some particular choices made in the writing and casting of “Summertime” (which will be discussed later), I found the acting nothing short of extraordinary. The entire cast had clearly investigated the essence of their characters, showcasing a significant range of emotions and physicality in bringing each character to life. Proctor-Bonbright and Ward had an incredible chemistry as Tessa and James and delicately tackled the ups and downs of their characters’ relationship with each other. Yet, monologues marked the highlights of the performance. Polk narrated a creep-inducing murder story, and Session delivered a substantial monologue about Frank, sincerely and with humor. Godbole’s unexpected appearance as Barbara was one of the most memorable scenes, in which she interacted with the audience and roasted Men with assertive confidence. As Gunter, Smith unleashed his explosive force, all the while barely clothed, and won over the audience with his intense physical movements. Finally, Erln Ysit was the jewel in the crown. From his breathtaking entrance to the emotive reveal of his history with François, Erln Ysit brought a new truth to Mimi with his meticulous posture and exuberant spirit. Undoubtedly, Erln Ysit made Mimi his own and gave her all of himself.

The distinguished work by the cast was made possible by Weild’s directions. This is not the first time Weild has taken the helm of directing a Mee piece. Her mastery in creating snapshot moments on stage and making a collage out of them is a perfect match for “Summertime.” Influences by her dance background were apparent, as each movement on stage was precise and purposeful. When the stage was populated by many characters in a scene, Weild assigned individual tasks and objectives to each performer on stage, creating sequences of actions occurring simultaneously, which demanded the audience’s full attention.

With that said, the love story between Tessa and James is nothing out of the ordinary. The many characters of different identities (race, sex, gender, sexual orientation, etc.) joining the couple on stage unfortunately come off as exotic despite an attempt to normalize the unconventional. Just as Tessa and James are fated to fall in love, Mimi and Natalie are fated to suffer in order to get a fraction of the happiness that is evident in the relationship between Tessa and James. Frank is in love with both Maria and Edmund, but in the world of “Summertime,” he needs to choose a side. As he confusingly switches from one side to another, I wondered where the storyline of this stereotype of a bisexual man will lead. At the end, James asks Tessa: “Do you believe in love at first sight?” She replies “yes,” and they kiss and dance hand in hand, while Frank is watching from a distance, alone and rejected. In this world, there are no happy endings defined for him. All he can do is watch and dream.

This production of “Summertime” featured a racially diverse cast, with two white performers playing the principal characters of Tessa and James. Casting decisions alone, however, did not create normativity in this production, but rather a discernible contrast persisted in how Tessa and James’ romantic arc was treated relative to the accompanying romantic arcs. In the words of Tianxin Shi ’18,

“Not only did “Summertime” leave the white heterosexual romance order (e.g. James and Tessa) relatively undisturbed, as is implicated in the show’s ending, but it may well have contributed to entrenching and rationalizing the “complicated” and “messy” nature of other forms of love pursuits. The juxtaposition of heteronormative love against all other relationships in the show reinforced some stereotypes associated with certain characters, and consequently the identities of the performers embodying them. “Summertime” upholds gender and sexual stereotypes by positing female characters as sexually capricious and emotionally dependent (e.g. all of them as eager to win François’ favor), and male homosexuality as repressive (e.g. Frank and Edmund’s relationship). In doing so, it remained deeply in line with valorizing and celebrating white heteronormativity, contrary to what the theme may implicate.”

During the post-performance talk back on Saturday afternoon, I asked Mee about his opinion regarding my view of “Summertime.”

I failed to see the flourishing relationships that Mee talked about. What I saw was trauma and pain for the characters that exist exclusively within his definition of the modern world. Yet the couple in his old-fashioned heteronormative story fall in love at first sight, brave through all doubts and obstacles with ease, then kiss and dance slowly under the night stars before the lights fade to black.

I would have to say that narratives about marginalized identities deserve, at least, to be treated individually and equally, instead of being used merely to serve a heteronormative story.

“Directors should go very far out of their way to avoid creating the bizarre, artificial world of all intact white people, a world that no longer exists where I live, in casting my plays,” Mee writes in his casting manifesto.

Perhaps Mee should also mention that casting people of color is by no means an endpoint in terms of achieving equity or equality in theater.

“Summertime” certainly delivered the wild crazy ride that it promised. The acting was exemplary, the design was skillful, and the directing served the text on many fronts. While “Summertime” seemed to have what is needed for an all-inclusive production, the result was not what I expected it to be. In the end, I am hopeful that this production will spark instructive conversations regarding how diversity is represented on stage. After all, progress is not a straight line.