The women’s ice hockey team sits at .500 after their first four games this winter, recording victories against two teams they’d been bested by last season.

On Friday, Nov. 18, the Cardinals traveled to Sacred Heart University, where they were defeated soundly by a score of 5-1. Wesleyan took a quick lead just 15 seconds into the match, as Rachel Aronow ’17 scored the first goal of the season. The Pioneers struck back with two goals of their own in the first period, and three more goals by the end of the game. Despite the Pioneers’ four-goal margin of victory, Wesleyan recorded 24 shots throughout the game, but were simply unable to get past formidable Sacred Heart goaltender Devan Kane.

The Cardinals were not deterred by the loss when they traveled back home for a rematch against Sacred Heart on Saturday, Nov. 19. Jess Brennan ’17, the team’s current top scorer, tallied her first goal of the season off an assist from Alicia Nickolenko ’20. Moments later, Aronow scored the second goal of the game, doubling her season’s total in the process. She was assisted by Allie Damren ’20 and Cici Frattasio ’18. The Pioneers struck back with a power play goal just two minutes later to decrease Wesleyan’s lead to 2-1.

In the second period, the Cardinals turned things back around with a goal by rookie Alexandra Banquer ’20. Less than six minutes later, the Pioneers answered to make the score 3-2. Kendall Carr ’19 regained the Cards’ two-goal lead right before the second period clock hit zero, scoring on assists from Madzie Carroll ’17 and Frattasio.

Sacred Heart did not go down easily, however, scoring once again one minute into the third period to make the score 4-3.

The Cardinals made it a two-score match for the third time at 13:01 in the third period. The goal by Alexis Horton ’18 marked her first points of the year. The Cards were able to hold on for a 5-3 victory, aided by an impressive 31 saves from goalie Allegra Grant ’20. 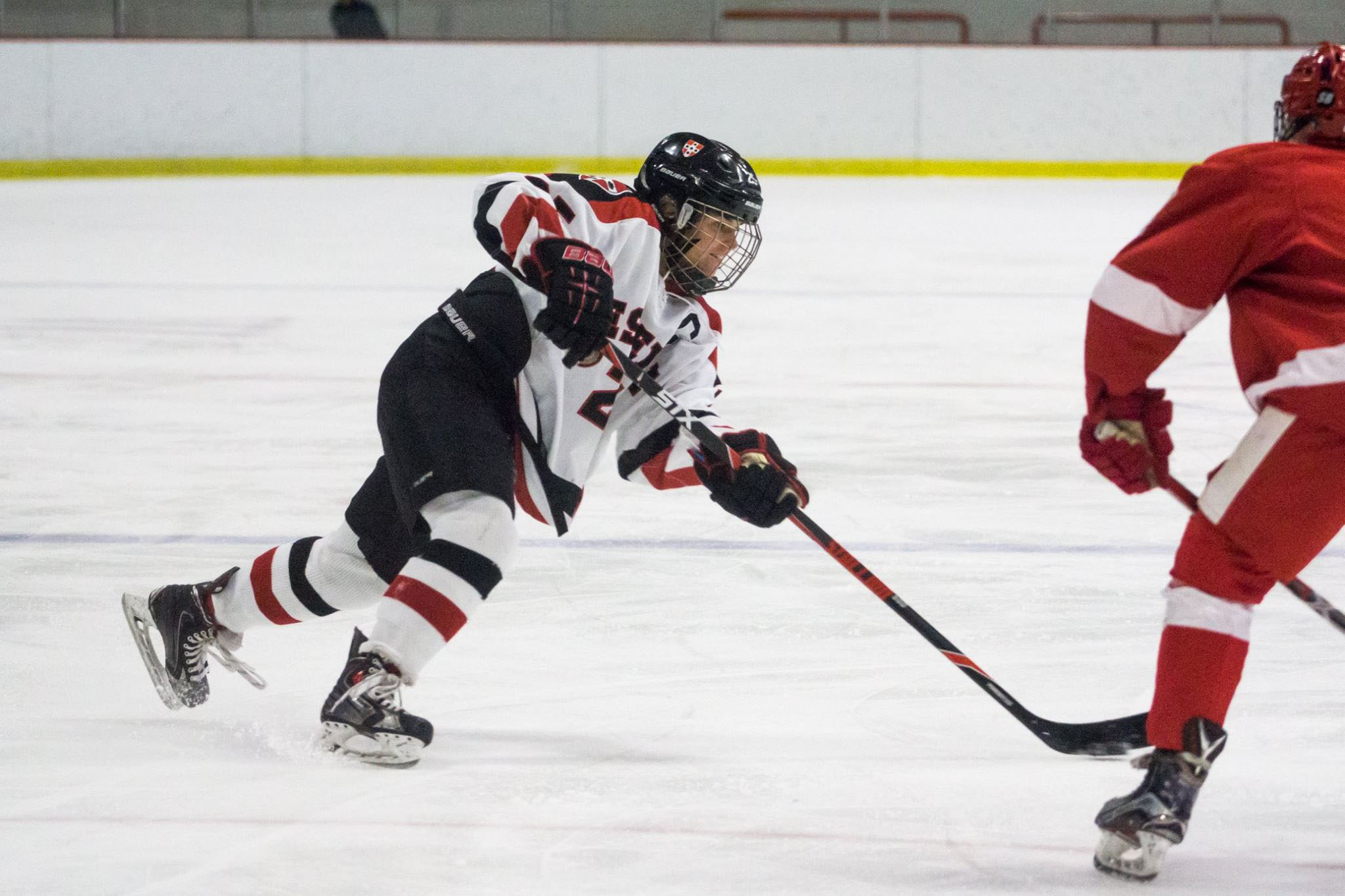 On Tuesday, Nov. 22, the Cardinals handed Salve Regina’s team its eighth loss this season at Salve’s home rink. The home team jumped to a 2-0 lead early in the first period with goals at 8:08 and 13:25. However, Wesleyan began their comeback in the second period off a Brennan goal assisted by Horton. Aronow was able to tie the game at 14:24 with a pass from Damren.

Not satisfied with simply tying the contest, Wesleyan took a 3-2 lead less than five minutes later as Brennan scored her second goal of the match. She was assisted by Sam Curran ’17 and Katherine Flaherty ’19.

In the third period, Horton moved from assisting to scoring, taking a pass from Caroline Seibold ’20 and finding the back of the net. Wesleyan then led by a score of 4-2.

Although the Seahawks got past Wesleyan goaltender Sam Smith ’20 one more time, the Cardinals secured a 4-3 victory and Smith ended with a total of 26 saves.

The Cardinals ended the Thanksgiving weekend on Sunday, Nov. 27 with a loss against Holy Cross.

Just 51 seconds into the game, Brennan took a pass from Jackie Kilar ’19 and scored to give Wesleyan a 1-0 lead. Holy Cross then tied the game up at 18:02 in the first period and later took the lead at 9:16 in the second period.

In the final period, Holy Cross secured a 3-1 win as Julie Matthias scored her second goal of the game at 13:33. Despite the loss, Grant continued her excellent play in net, stopping an impressive 38 out of the 41 shots she faced in the contest.

“We’ve learned a lot during these past games and are definitely thrilled about all the potential our team has this year,” Carroll said, reflecting on the team’s first four matches. “Already we’ve managed to put a bunch of pucks away which is really exciting. Right now we’re looking forward to playing our first NESCAC game this weekend and hopefully making a statement in the league.”

The 2-2 team will return to the ice this Saturday, Dec. 3 at 7 p.m., where they will challenge Little Three rival Williams, who has a current record of 1-3. Last season, the Cardinals came away with losses in both of their matches against the Ephs, largely due to a lack of offensive firepower. That doesn’t appear to be an issue so far this season, given the fact the Cards have scored at least four goals in half of their matches.