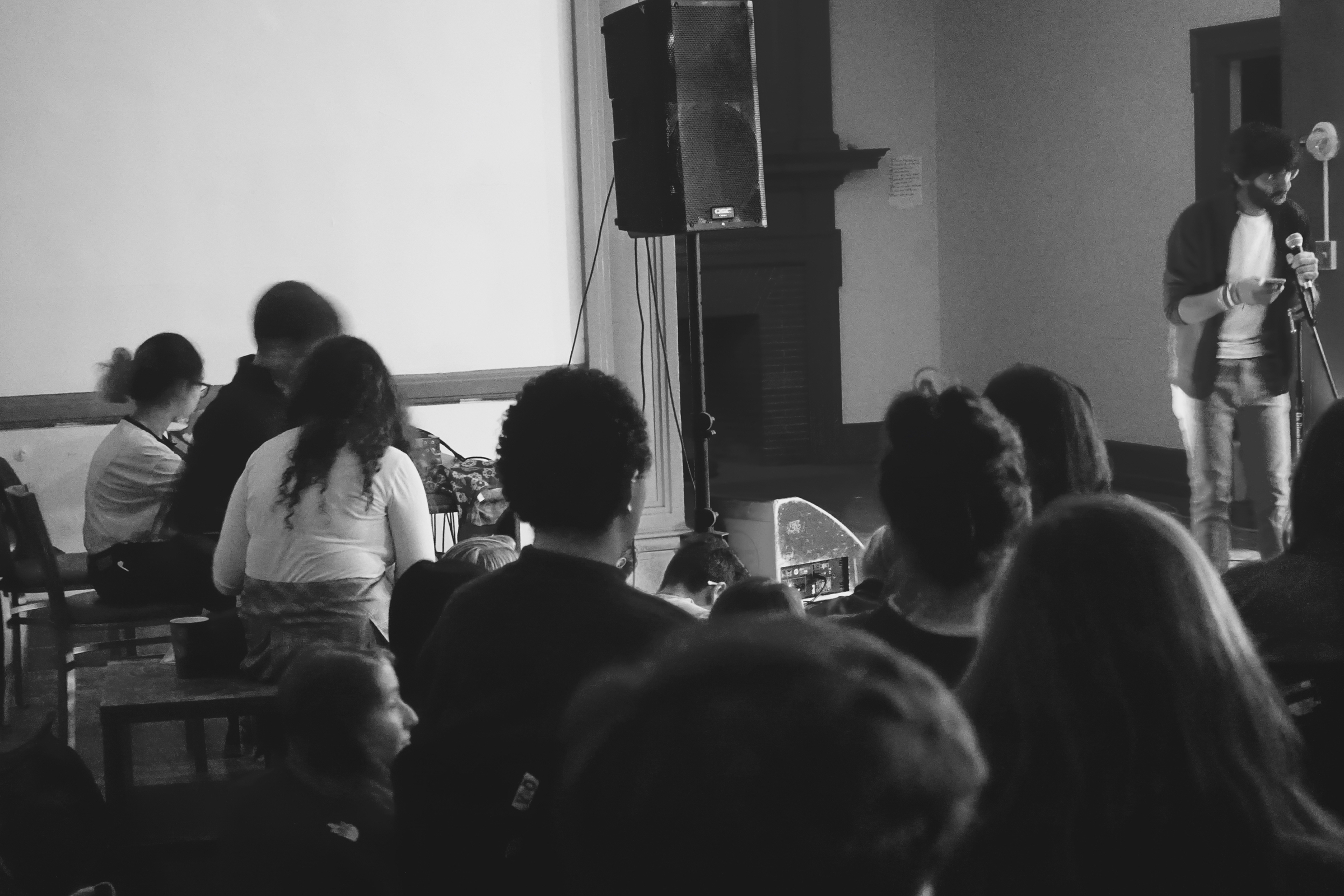 I must admit I knew very little coming into the Grand Slam poetry competition in Music House on Saturday, Nov. 19. I’d been to several slams in my time at Wesleyan, but always as an audience member. With the kind folks of Wesleyan’s slam poetry collective, WeSlam’s, permission, I was allowed the opportunity to photograph and become all the more acquainted with such an intimate atmosphere. I want to acknowledge my role as both an observer and as a writer coming from a place of privilege, not only from my circumstances in life, but also from the kind treatment and access I was allowed in documenting such a powerful and moving event intended to provide space for marginalized voices to be heard.

After two prior poetry slams this past fall, students packed into Music House for “On Resurrection: The Grand Slam Poetry Slam ft. Paul Tran.” The competing poets that night were as follows: Arnaav Bhavanani ’20, Ahmed Badr ’20, Ariel Edelman ’20, Mina Khan ’20, Lili Kadets ’17, Lexi Slater ’19, Hazem Fahmy ’17, Dylan Moore ’20, Clara Babbott-Ward ’20, and Isaac Klimasmith ’20. Of the largely freshman group of 10 performing poets, only seven made it into the night’s second round, and in the end only 5 finalists were picked to represent Wesleyan in the College Unions Poetry Slam Invitational (CUPSI), an intercollegiate poetry slam competition occurring in Chicago from April 12 to 15 of 2017.

For those unfamiliar with the rules of slamming, each poet is allotted 3:10 seconds per round. If poets go over their time limit, a penalty is tacked onto their final score. Five judges are picked at random from the crowd before the slam begins. These judges then rank each performance on a scale of 1 to 10.

“Zero, being everything that has happened in the past two weeks,” Giorgia Peckman ’18, the event’s MC, jokingly explained. “If you’re not coming or crying, it’s not a 10.”

Throughout the nearly three-hour event, all the competing poets sat in the audience and watched their potential teammates perform to the clicks of snapping fingers and a frequent roaring applause. Though staged as a competition, the event appeared to be so much more than that, as competing poets were often the loudest voices in the room cheering out and encouraging their fellow performers as they told their stories. Lit by the backdrop of purple and blue stage lights, poets slammed during both rounds on a wide array of topics: the recent U.S. election; the U.S. war in Iraq; political oppression, both abroad and in the U.S; diasporic struggles like assimilation and immigration; heartbreak and critiques of relationships; body image issues; and issues relating to sexual orientation and gender identity.

In between the first and second round, guest poet Paul Tran slammed and discussed their personal history with the art form.

“There are three things you need to know about me,” Tran said. “One: I’m a Taurus. Two: I’ve been a part of the daddy issues club since 1992. And three: These poems are from a book titled ‘These Poems are Trash, but Thank You So Much for Being Here and Listening.’”

Tran discussed their beginnings with slam poetry as a first-generation college student at Brown University. They then explained how they came to find poetry as a vital medium for self expression after they were sexually assaulted in their junior year.

“After that experience I had no language to tell the dean, to tell a police officer, to tell my family what happened and what I needed,” Tran said. “The only thing I had was poetry, surprisingly. That was the only space that I found room for speech, and so speech showed up at the door to save me.”

Tran, who lives and works in New York City as a resident poet at Urban Word NYC and Poetry Editor at The Offing, is best known as the recipient of the “Pushcart Prize.” At CUPSI in 2015, they won three awards: “Best Poet,” “Pushing the Art Forward,” and “The Torchbearers Award.” 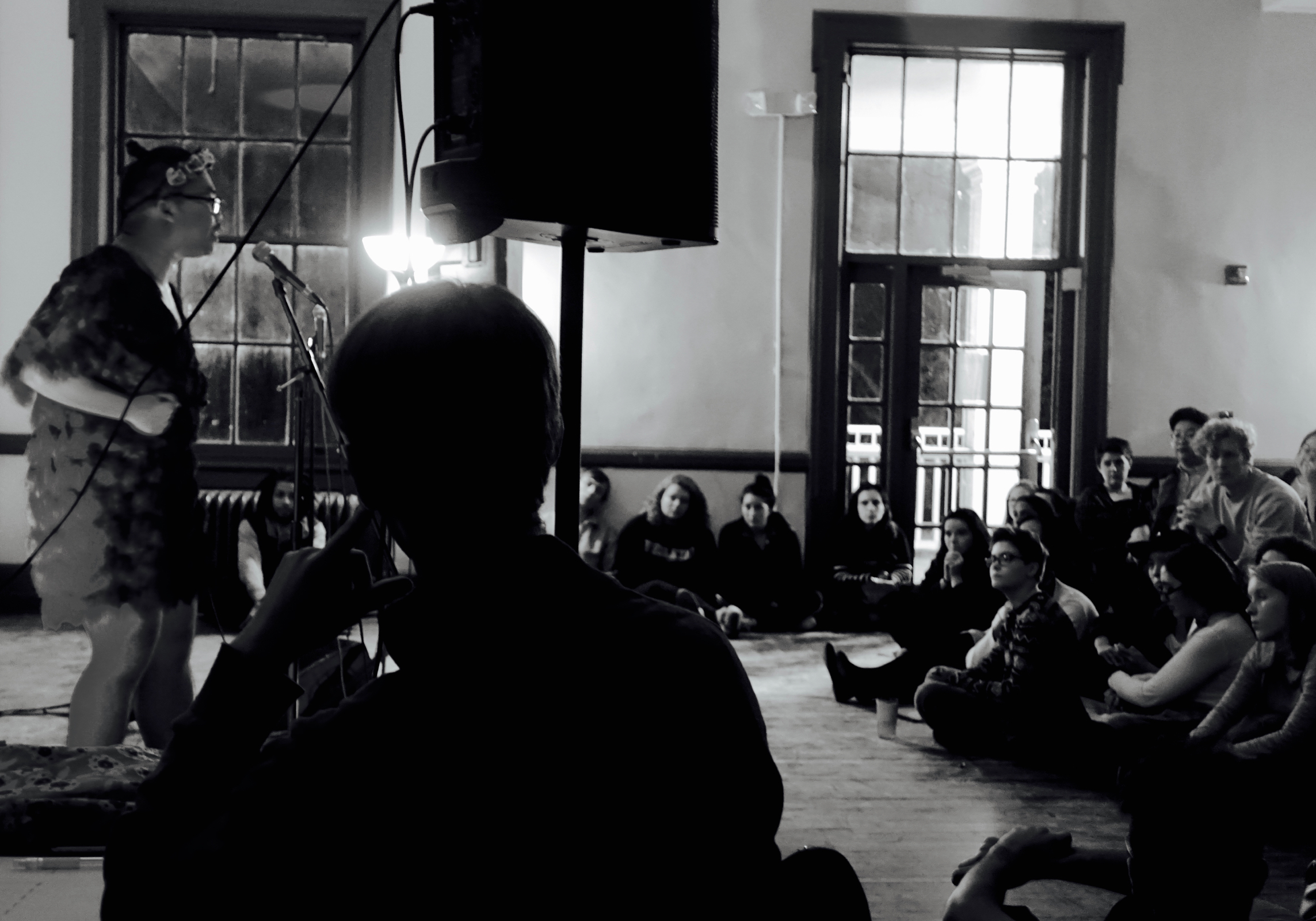 They are currently working on a collection of poems detailing intergenerational trauma, sexual violence, and U.S. colonial power over Saigon in the post-Vietnam War era. They write from personal experience as the child of refugees from Vietnam. Tran captivated the audience when slamming, pouring out a wide range of emotions and flows.

In between performances, Tran opened the room up to an interactive discussion with the audience. They explained why they made space for a Q&A session.

“I think there’s this production when we go to slams or poetry readings that the person on stage offers you all of their love and that’s really kind of the extent of our relationship and I really want to challenge that a little bit,” they said. “I also want to challenge the notion that artists can just float through these spaces and that’s it. I think there’s something that my heart can never do for you, but there are things that we can do in conversation together.”

During this discussion, many students were able to both approach the poet with thoughts on their work and discuss how Tran works within the art form.

“How do you understand and navigate your identity as a non-black person of color when slamming with respect to blackness, an identity which is cemented in slam culture?” Sahil Singhvi ’18 asked during the Q&A.

“I think it’s incredibly important to honor forms of art in which they originate; it’s most important that the folks in that community retain power, agency, control, success over the art forms that they create,” Tran said. “As an Asian-American person in slam, I enter into a tradition that is, of course, not mine, in a humble attempt to make more legible experiences thought to have been unimaginable.”

Tran also discussed how the sentiments of slam can move beyond competitions and into contestants’ and audience members’ everyday lives.

“If we’re able to do the social justice work that comes after a poem ends—taking care of ourselves, and our communities—then we will be able to bring these positive experiences to the slam,” Tran said. “For example, it is very easy for me to talk about trauma. These experiences are benchmark moments in my life, but when is the poem about joy going to emerge?”