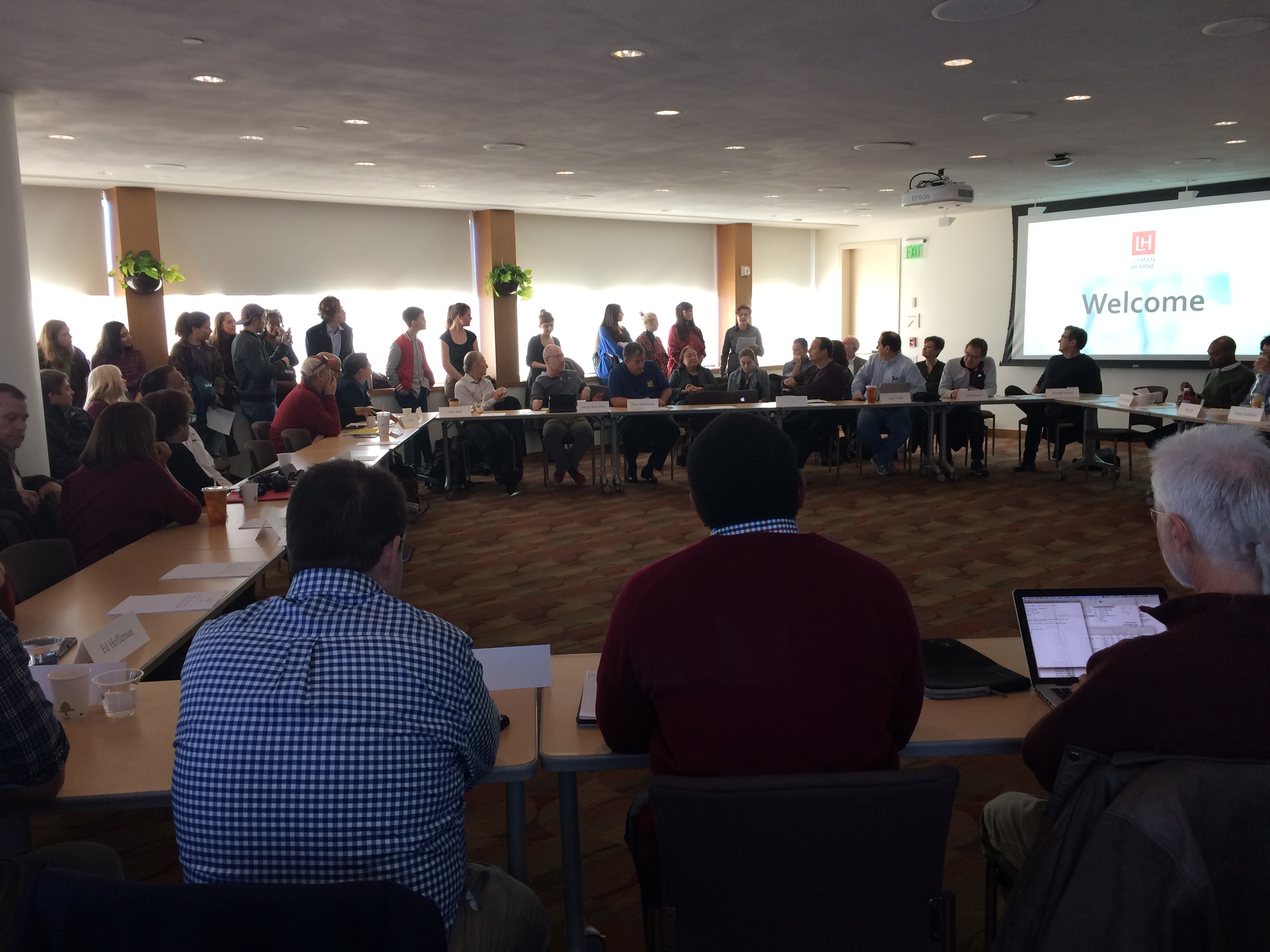 Members of the Student Union opened the Board of Trustees meeting this morning in the Daniel Family Commons.

Early this morning, the Board of Trustees prepared to meet in Usdan’s Daniel Family Commons (DFC). Also in attendance was a group of approximately 35 students, many of them members of the Student Union, who had not been invited.

The Board’s proceedings were closed to students other than a handful of members of the Wesleyan Student Assembly (WSA). Students sought to open the meeting in a demand for transparency and accountability.

Abby Cunniff ’17, a member of the Student Union, explained the Union’s goal.

“The action is simply to make this meeting public, and for them to understand that there’s the potential for us to do this at any other meeting,” she said.

Upon the students’ arrival in the lobby of the DFC at around 9 a.m., Vice President for Student Affairs Mike Whaley explained that although students could wait in the lobby for the trustees and would have the chance to talk with them on their break at 11 a.m., the meeting would not proceed if the students entered the room.

“That’s their decision to make,” Henry Prine ’18 said, who also explained to Whaley that the students had arrived at the meeting not to disrupt, but to listen. “We understand that there are a few things that the Board discusses that can’t be public, for legal reasons, but we think the majority of it, students have a right to hear about….We’ll head in now.”

Because the main doors were closed, students filed through the serving area of the DFC and lined the perimeter of the room.

“In light of recent administrative inaction in the face of racism and misogyny on campus, as well as previous demands of University transparency and accountability, we demand that all Board of Trustees meetings be open to the public,” Cunniff announced to the room.

Donna Morea ’76, Chair of the Board, thanked Cunniff for her comments.

“We are having a public meeting with students this afternoon at the Gordon Career Center,” she said. “You are invited. But we cannot proceed with this meeting with you here. We’ll ask you to leave.”

When Cunniff informed Morea that adjourning the meeting would be the Board’s decision, University President Michael Roth ’78 officially ended the meeting before it had begun.

As the trustees exited the room, some students lingered to form a plan; others followed the Board members to their next location, which at that point was unclear.

“Our daily lives are affected by these decisions,” said Tedra James ’18. “I’m a junior, and ever since I’ve been here, I’ve been hearing the same complaints about CAPS, about ethnic studies—the same things. This is where those decisions are made. It would be great if they were open so that people could hold the Board of Trustees accountable.”

Students soon caught up with the Board of Trustees in the Public Affairs Center (PAC), where they again crowded into the room.

“We will not be meeting,” Roth announced to the room of students and trustees. “Check your emails for further instructions about how we’ll proceed.”

When students requested a discussion with Roth, he explained that although there had been a discussion planned for after the meeting, he had been told by the Chair of the Board that they were “unable to meet in these conditions.”

“I know, you’re used to going where you want,” Roth said. “But this is a meeting that has representatives from the student body, and this is one that is not open.”

“This Trump election has been hurtful for everybody, and this is making it worse for me,” the administrator said.

Another trustee, an alumnus of the University who preferred not to be named, explained why he believes the meetings should remain closed to students.

“We look at the numbers, we plan the budget, we get reports,” he said. “It’s a Board. And there are meetings that are specifically for engaging with students.”

The trustee expressed frustration at the students’ insistence on listening to the meeting.

In Usdan, where a Wesleying livestream of the two halted meetings was projected onto a big screen, a group of students composed a press release about the morning’s events.

Mira Klein ’17 guessed that the trustees had adjourned both meetings because of their reluctance to set a precedent of opening them.

“I think their goal is to provide a limited amount of student voice in order to appease them, but setting this precedent is seen as too dangerous for the future,” she said. “The fact that they were so insistent on not opening the meeting to students shows an acknowledgment that students disagree with what they were going to say.”

Sarah Lurie ’17 was also frustrated, and not because they had intended to deliver a message to the trustees.

“I didn’t want them to hear anything I wanted to say,” they said. “I wanted to hear what they had to say.”

Indeed, the students in Usdan grappled with feeling that the trustees had simply missed the point of their action.

“We want to challenge the power structure,” Eli Spector ’17 said. “When Michael Roth essentially called us brats because we think we should have access to things, it was really indicative of them not understanding that it is important where you make these decisions and who is involved, and who is accountable.”

“As of now, I believe the trustees are moving the meeting off campus,” Prine wrote in a message to The Argus. “I do not believe we are going to follow them. I think we effectively made our point this morning….I know one trustee said they need a bylaws change before they can open up the meetings to students. I just read though the whole bylaws and wasn’t able to find anything that said that students are not allowed in board meetings. I am waiting for clarification from them on that. So hopefully the Student Union can work on that with them before their next meeting so they no longer need to run and hide from transparency and student voices.”

On Sunday, Nov. 20, Morea provided a statement to The Argus.

“To conduct university business, the Board must be able to hold meetings with its duly elected and appointed members,” Morea wrote. “Yesterday, the Board was forced to adjourn the meeting to an executive session held in a different location. Executive session precludes attendance by student and faculty representatives to the Board, so the students who interrupted the proceedings this morning reduced the input that Trustees usually are able to receive. Student voices were absent from the room and our discussions of important issues were cut short.

I wish that the ‘Wesleyan Student Union’ members had contacted us to discuss their concerns prior to this weekend,” Morea continued. “Sadly, the disruptive attempt to “open” the meeting to students had the opposite effect–it actually closed it.”