Students Walk Out in Protest of Trump, Demand Sanctuary Campus 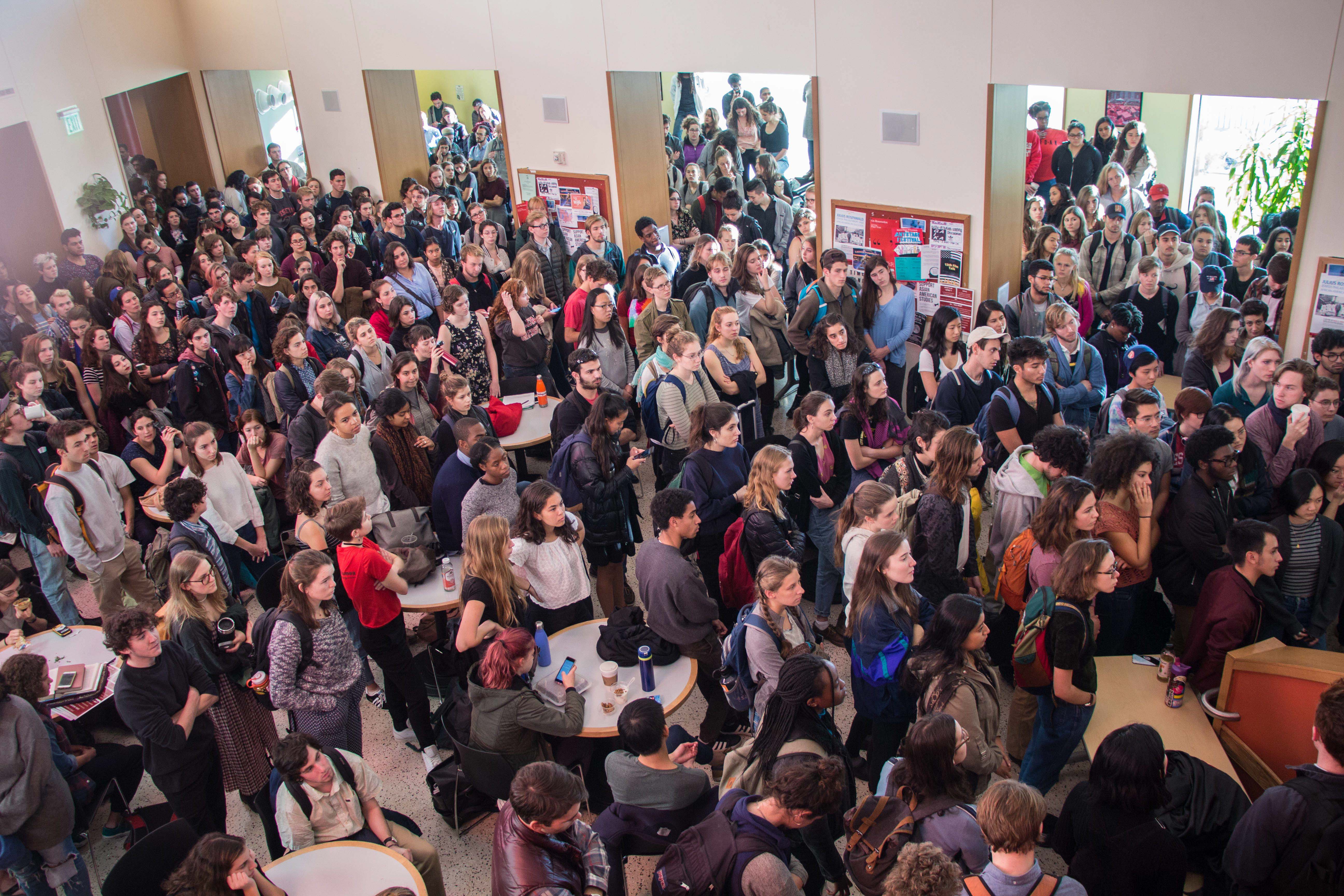 On the afternoon of Wednesday, Nov. 16, students across campus walked out of their classes and filed into the Usdan University Center to participate in a national walkout to demand that the University be declared a Sanctuary Campus. Responding to a call from the organization Movimiento Cosecha, Paige Hutton ’18, Aleyda Robles ’18, Michael Montoya ’20, and Tomás Rogel ’19 also circulated a petition earlier this week that has since acquired hundreds of signatures.

The four organizers first read this petition to the massive crowd that had gathered in Usdan.

“We acknowledge that the term ‘sanctuary’ can be misleading,” Rogel said. “We want to clarify that we understand that as people who are undocumented in the U.S. these students already are not ‘safe’ in this country and never will be. ‘Safety’ is not something that people who are part of marginalized communities will ever fully have access to in this country; however, that does not mean that we should not strive for a safer environment.”

Rogel continued to read the petition, which began with a letter addressed to University President Michael Roth that frames the demand for a Sanctuary Campus around national legislation.

“Last spring you announced an initiative to bring more Deferred Action for Childhood Arrival (DACA) students to campus in the fall of 2017 and treat them as U.S. citizens within the application pool and admission process as opposed to international students,” Rogel said. “We, as a community must acknowledge the challenges that DACA students face at institutions of higher education and support them by any means possible. Especially now that under a Trump presidency DACA, at a national level, may be repealed.”

The legal demands that Rogel outlined included bringing legal experts and/or immigration activists and advocates to campus in order to provide legal counseling to undocumented students, as well as students with undocumented family members and the Middletown Community.

Hutton, a co-organizer of the Wes Needs CAPS campaign begun late last month, read the section of the petition that deals with mental and emotional resources in Counseling and Psychological Services. Hutton also read demands for the University to prioritize its search for an advanced practice registered nurse (APRN).

“Many students do not have the time or the mental energy to look for an APRN off campus,” she said. “This issue is exacerbated by the fact that few, if any, APRNs in Middletown are taking new patients because of the influx of students in need.”

Facing an almost certain Trump presidency, Hutton continued, some students might find their healthcare compromised. Moreover, the petition demands that the University take seriously Resolution 3.38, which promises two new therapists in CAPS, adding that the sanctuary campus petition also states that at least one of the proposed therapists must be a therapist of color with training in social justice issues.

Montoya read the final section of the petition, centered around monetary resources.

“If students do not have access to Medicaid due to documentation and cannot afford to pay for school insurance, they should be given a scholarship to pay for it,” he said.

Montoya added that the petition demands that students should be given resources or assistance in paying for their DACA application, as well as other forms for things such as legal residency, visas, or Temporary Protected Status (TPS).

The petition also demands that the University provide over-break housing for students unable to return home during breaks “due to fear of mental, emotional, or physical strife.”

After the petition had been read, Robles introduced a moment of silence for the thousands of undocumented immigrants currently detained.

“Many of these people are raped, abused, or even murdered on their trip to the U.S., and when and if they make it, they must live in fear, especially now, after the promises that have been made by the new President-elect, Trump,” she said.

Robles reminded the audience that Trump’s presidential victory is not a new reality.

“Bigotry and racism existed long before Donald Trump got elected, but it seems that some people have forgotten, or only now started realizing it,” she said. “President Obama and his administration have deported record numbers of immigrants and torn many families apart. There were ICE raids going on throughout this year. They were approved and funded by a democratic president.”

Robles concluded her statement by urging the assembled students to act beyond writing Facebook posts and signing the petition.

“Talk to your families about this, especially white allies,” she said. “Safety pins will not make me feel safe, but you know what might help? Knowing that you’re doing the work of educating people who will most likely listen to you before they listen to black or brown people.”

After the crowd dispersed, Hutton explained that the organizers hope to join with other student groups.

“We already spoke to someone who’s a part of the Muslim Students’ Association, and we know that’s another group that should be in here,” she said.

Robles noted that the organizers hope to send the petition to Roth by this weekend, when the Board of Trustees will convene.

In an interview with The Argus shortly after the walkout, Roth said that he has consulted the University’s legal team to see how a legally binding statute similar to a sanctuary city can be established.

“I’m trying to find out what it would mean to be a sanctuary campus on the model of a sanctuary city,” Roth said. “So I met with our legal folks and Antonio Farias, and I want to make sure that whatever we do is actually in the interest of our students most vulnerable to threats from deportation and does not put them in a more vulnerable position.”

Because of the lack of legal precedent extending sanctuary city doctrine to private universities, Roth expressed caution over signing a petition without any legally binding teeth behind it.

“We can’t just declare we’re not part of the country, or we could declare it, but it wouldn’t be meaningful and it would actually put people at risk,” he said. “We can perhaps signal that we would institutionally as well as individually not participate in any mass deportations or any extra-constitutional or extra-juridical efforts to intimidate and deport members of the Wesleyan community.”

So far, the California State University system has vowed to not cooperate with local, state, or federal agencies that seek to deport its students. Several other schools have signed petitions along similar lines, but the legal backing behind sanctuary campus policies remains unclear.

“This movement is important to me because of my and my family’s experience as Latinx immigrants,” Rogel said. “I know the sacrifices of leaving your home and life to pursue greater opportunities, often out of fear. I want to stand in solidarity with the undocumented citizens of my community and let them know that they are welcome here, and that they don’t have to live in fear.”

He echoed Robles’ sentiments about the Trump administration continuing a legacy of deportation.

“Many of us, immigrants, have always known this, and while we are glad to have more people recognize oppression, we need your full commitment,” he said. “If you want to actively make positive change in your community, this is how you do it. Not Facebook posts, not showing your face at the one protest on campus and taking up more space than you need, but supporting the framework that we have given you.”

“DACA students on our campus right now are especially vulnerable due to Trump policies that include an abolishment of the DACA program and the threat of deportation,” Montoya said. “Although being able to voice frustration and anger is necessary, without action, voices can become muffled of snuffed out before any change occurs….Speaking is important right now, but performative allyship is not enough. If we do not change our campus to address the changes in the world, then our passivity only goes to prove the apathy of our community.”