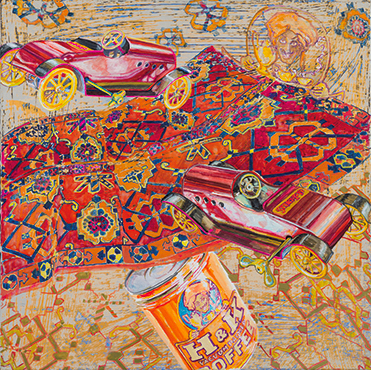 This description is of the first painting in David Schorr’s exhibit “FLYING CARPETS” at the Ezra and Cecile Zilkha Gallery. In addition to paintings, the impressive collection display uses poetry and sculpture to whisk the viewer away into a dream-like past.

This first painting, titled “PaintTube Truckloads,” drew me into this exhibit immediately. The Persian patterned carpet, the red toy trucks, and the strewn bits of pattern and paint tubes had an oddly calming effect.

The second painting had a similar theme, only in this one the trucks carried the pattern tiles of the rug they sat on. This began to give me a sense of the paintings building themselves, like the trucks were helping construct the image, or at least the carpets. Considering the use of toys, this construction felt a bit like one of a childhood memory.

With this neat thought in mind I moved on to the third painting, where I found my mental construction crew now on a coffee break. The trucks had switched to cars and an old-fashioned, Middle Eastern-themed can of coffee beans now sat on the carpet. The miraculous stimulating power of coffee alongside hustling cars all on a flying carpet promised exotic excitement.

Later down the line, airplanes began to zip into the paintings, adding yet another mode of lively transportation. These added even more to the painting’s sense of traveling to places unknown. (I also have a sneaking suspicion these planes were added so “Carpet Bombing” could be one of the painting’s titles.) “Mickey’s Airmail” was my favorite of these aviation paintings. It pictured a mature, but still endearing Mickey Mouse flying about the world over a flying carpet.

After the paintings, I came to a long poster with cars, planes, and trucks similar to those of the paintings, only now interspersed with poems. All of this roamed over more flying carpets.

The opening poem, addressed “To any reader,” further set the gallery’s mystical tone. The lines created an image of a ghost-like child playing with the toys that are laid out in the poster. One line reads, “He intent/ Is all on his play-business bent,” making me consider whether the creator is referring to his intent with the artwork, or that I had become part of this creation as I traveled through this exotic world of common playthings.

Further down, the poster’s images of crowded taxis made for another interesting effect. They carry over the feeling of the bustling metropolis while also maintaining a dream-like quality. This sense was summed up in one especially keen line of the poetry: “the lullaby of broadway.”

Almost at the poster’s end there’s a poem that, to me, sweetly combines the rambling speech of a child and the grave grumble of reflection: “She could not remember, now, ever being young / And then did.”

The poster chain concluded with a truck carrying a tightly secured tank labeled “dreams.” This part still has me thinking. All I’ve figured out so far is that the dreams appear stowed away, but the truck implies that they are still mobile, and will one day be emptied.

The sculpture piece is in the far back left corner of the exhibit. Just keep straight coming out of the door and head back all the way around the wooden frame. I give these instructions because I nearly missed this part of the exhibit. I spent an undisclosed amount of time staring at the sculpture from behind in a futile search for artistic meaning in its wood support frame. I was about to leave before I noticed the walkways on either side. I’m truly glad I managed to find my way around to the correct viewing side, as this proved to be my favorite part of Schorr’s gallery.

In this quaint back corner of the empty museum, I felt like I had stepped into a flashback. From the ceiling hung those old-timey lightbulbs in which you could see the filament burn its golden yellow. Under these lights spread a large carpet that seemed to billow over its uneven wooden frame. The carpet sloped down toward as if inviting me to climb on.

Scattered across this rug were old toy automobiles that seemed to have been plucked right out of the paintings. They all stood frozen in a city’s hustle and bustle, seeming to wait for some hand to play with them. I stood transfixed with wonder.

I endured a trudging march in the rain to see this gallery, not only to evade doing work but also to take my mind off the news. David Schorr’s work proved an effective escape. It enchants and absorbs you into a world where you float around as if in a dream. If you haven’t gone yet, do so as soon as possible before the exhibit ends on Dec. 11.