The Man Behind the Emails: A Conversation with Paul Turenne 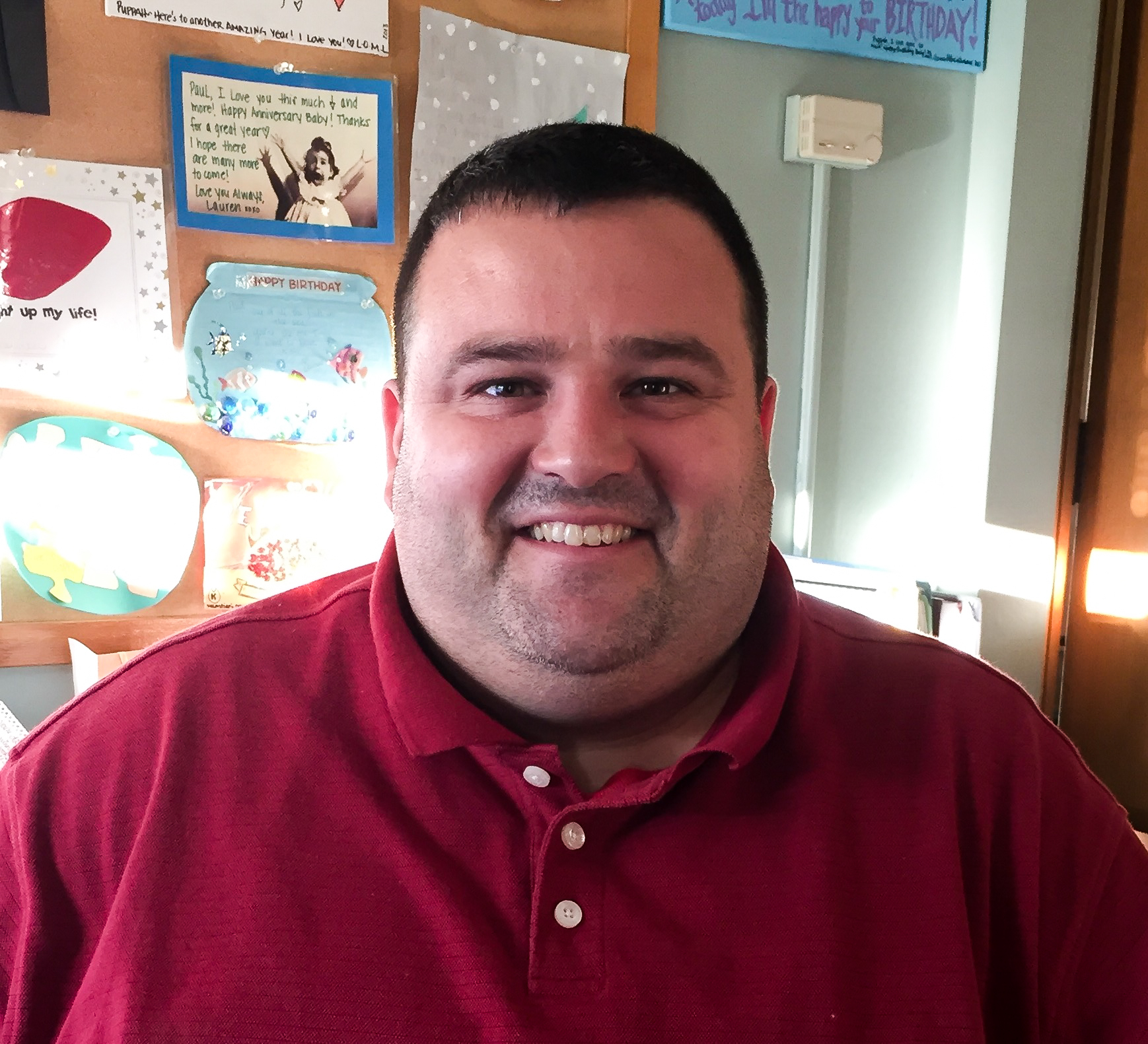 When I found Senior Associate Registrar Paul Turenne in a first-floor conference room in North College and explained to him that the angle of this piece was “Paul Turenne: The Man Behind the Emails,” he laughed. But it’s true: say the name “Paul Turenne” to anyone on campus, and they’ll say at the very least that it sounds familiar. Ask around pre-registration time, and you’re even more likely to get recognition.

I asked Turenne if it was a busy time, seeing as pre-registration had just opened. He confirmed that it was, and not only because of pre-reg. We were also speaking on the day before Election Day. Turenne was responsible for producing the letter every student needs to verify their address, sending them that email, and putting it into the portfolio.

On an average day, Turenne spends much of his time answering questions, both via email and over the phone. I asked him how he stays organized.

This is Turenne’s ninth year on the job, and by now he’s used to the way things work.

“It’s really lucky that things are so cyclical,” he said. “I just know, now that I’ve done it for nine years. In November, you do pre-reg. That’s just what I do.”

In preparation for each new semester, Turenne creates a drop/add calendar, a pre-reg calendar, a teaching evaluation calendar, and a grade entry calendar. He also gets in touch with students who are going abroad and those who will be returning. Turenne explained that Monday through Wednesday, he’s constantly in meetings. Thursday and Friday are for more solitary work, usually at the computer, completing the tasks he’s discussed on the other three days.

I asked Turenne if Thursdays and Fridays ever get lonely for someone who’s so social.

“I like talking to people,” he said. “But generally, once I get locked in and I’m working on something that’s highly detail oriented, the time flies by, so I don’t tend to get very lonely.”

I wanted to know what types of interactions Turenne has had with students. He laughed.

“I was serving dinner at one of the Thanksgiving dinners at Usdan, so I had my nametag on, and a student was like, ‘Oh, my God, you’re that person?’” he said. “And I said, ‘Yeah.’ And he said, ‘How do you send emails every day at three o’clock in the morning?’ And I’m like, ‘I don’t; there’s a computer program that does those ones.’”

“How many emails do you send a day?” I asked.

Turenne first guessed around 150 or 200, but then he shook his head.

I mused that it might be stressful to send emails to all those people. Did Turenne read each one over endlessly, ensuring that there were no errors?

“When I first got here, you’d send it and then you’d find the error,” he said. “Or people would email you back right away and say, ‘November 1st is a Tuesday, man, not a Monday.’ And I’d be like, ‘That’s so embarrassing.’”

Now, he said, some systems allow him to send a test email. That way, he sends one, reads it over, and then sends it again.

I asked Turenne what his hobbies were outside of his job.

“I’m a justice of the peace, so I can officiate weddings,” he said. “I’ve done probably 35 in the past four years.”

“All people you know?” I inquired.

Turenne shook his head. Some were close friends, friends of friends, and family, he said, but others were not.

“I would say it’s about half and half,” he said. “People I know and have a connection to, or people who book the chapel here at Wesleyan.”

I asked if after 35 weddings, they all started to feel the same.

“Sometimes they start to feel the same, which is unfortunate because it’s unique for them,” he said. “But I try to make it personal for every couple. I let them pick the readings, obviously, and give them different options for the wedding vows and the real exchange.”

Turenne himself has been married for seven-and-a-half years and has a daughter, Sofia, who will be two in January. He and his wife live in Middletown near the high school. Turenne grew up in Plainfield, Conn. and attended American University, where he majored in political science and studied abroad in London. In London, Turenne interned in the constituency office for members of European parliament, and in Washington D.C., worked for a member of Congress.

After graduation, Turenne worked as a faculty advisor for the National Young Leaders Conference in Virginia. He then taught U.S. history at a Catholic high school, a job that he said didn’t suit him.

“I never wanted to be a teacher,” he said. “That was never my plan. I didn’t get trained for it, really. At the leadership conference, I was like, ‘I love working with students! This is great! I’ll be a teacher!’ And then I realized that it’s the same students every day. It’s not students from all over the country who come for 6 or 11 days and then they leave, and it’s very informal. Pretty quickly, it wasn’t the same. It wasn’t the role that fit best for me.”

After the Catholic high school, Turenne worked in ResLife at Mitchell College and Post University. At Post, he started working in the registrar’s office, and later came to Wesleyan as a registrar. While working here, he obtained a master’s degree in counseling, specifically as it pertains to student development in higher education, at Central Connecticut State (CCSU), where his wife, Lauren, is the assistant director of undergraduate admissions. At CCSU, the Turennes took classes together.

“It was funny, because it’s counseling, so you get to know each other really well,” he said. “It’s a small program, and you always had to do introductions, and [my wife and I] would never sit near each other, but I’d say, ‘That’s my wife.’ And people would always say, ‘You mean like Facebook married?’ I was like, ‘No. Real married. I don’t even have Facebook.’”

I asked him why not.

“[Facebook] wasn’t a thing until I’d already graduated from college, and, working in ResLife, I didn’t want to get involved in it, because I was trying to keep my personal life [separate] from work life, because you’re enforcing policies,” he explained. “And after I got out of ResLife, I thought it was kind of cool, the way you could keep up with people.”

After a short stint on Facebook, however, Turenne realized it was simply too much work.

“I kept updating it, and I was spending too much time finding out what other people were doing—people who I hadn’t talked to in 15 years,” he said. “So then I decided, after a brief foray into it, ‘It’s not my thing.’”

I wanted to know what Turenne’s favorite thing to do with his daughter was. He smiled.

“I don’t know how to say this without sounding funny,” he said. “But my favorite thing in the world is, especially at the end of the weekend—though it can be any day—when we drive home at night after doing whatever it is we’re doing, and she falls asleep in the car, and then I have to unbuckle her, and carry her up the three flights, change her real quick, and put her to bed.”

“Why is that your favorite thing?” I asked.

“Because that’s something that only a parent does, right?” he said. “Like, I’m an uncle. And my friends have kids. And I like to think I’m close with them, but I’m just their uncle; I’m just their parent’s friend. So being able to do that—knowing that she is tuckered out, and whether we went to visit people, or went somewhere and did something, she’s all tired and asleep—it must mean she’s had fun.”

Turenne struck me as an animal lover—I could see him with his arm around a Golden Retriever or a Collie—but surprised me by saying that he and his family don’t own any pets.

“I’m not an animal person,” he said. “We didn’t have animals growing up, so it was just never something that I was used to. But my wife love dogs—she always grew up with dogs—and so far everyone’s predicted that I would give in and get her one, but I haven’t.”

The Turennes love Middletown. One of their neighbors is the co-owner of Krust; one of Turenne’s wife’s best friends works at Amici, so they go there a lot. To meet with couples about their weddings, Turenne always suggests the New England Emporium. He loves Café 56 and really likes Mondo and Fiori.

“I’ll go somewhere, and I’ll run into people I know,” he said. “I grew up in a very small town, where everybody knows everybody and most people are even related to everybody.”

Since becoming involved in local politics, running into people he knows has only become more common. Turenne participated on the Inland and Wetlands Commission for a while, addressing applications that had been previously screened for environmental impact.

“People would submit applications to encroach on the wetlands, and we’d try to work with them,” he said. “Most of the time, the approach was to find a way to mitigate the impact rather than simply say, ‘No, you can’t do it.’”

I asked Turenne what he was working on now, and he excitedly pulled up the design for WesPortal, the future of the e-portfolio, on the big screen in the conference room. We clicked around together, investigating the alumni portal, among things. Before leaving, I asked Turenne if there was anything else he’d like to say.

“When I got here, I had just turned 30,” he said. “I was renting a room in my buddy’s apartment. I had just started dating someone. I felt like I was a kid, you know what I mean? Now, nine years later, I’m married; I’m a homeowner; I have a child; I have a master’s degree. I’m a grown-up. And it’s similar to the path that all of you take. You get to college, and you think you know what you’re doing, but then you’re, like, ‘Woah. I have to do some learning; I have do so some maturing here.’ And by the time you leave, it’s amazing how different you are after four years.”