Bantams Top Football 45-21 in Battle of the Birds 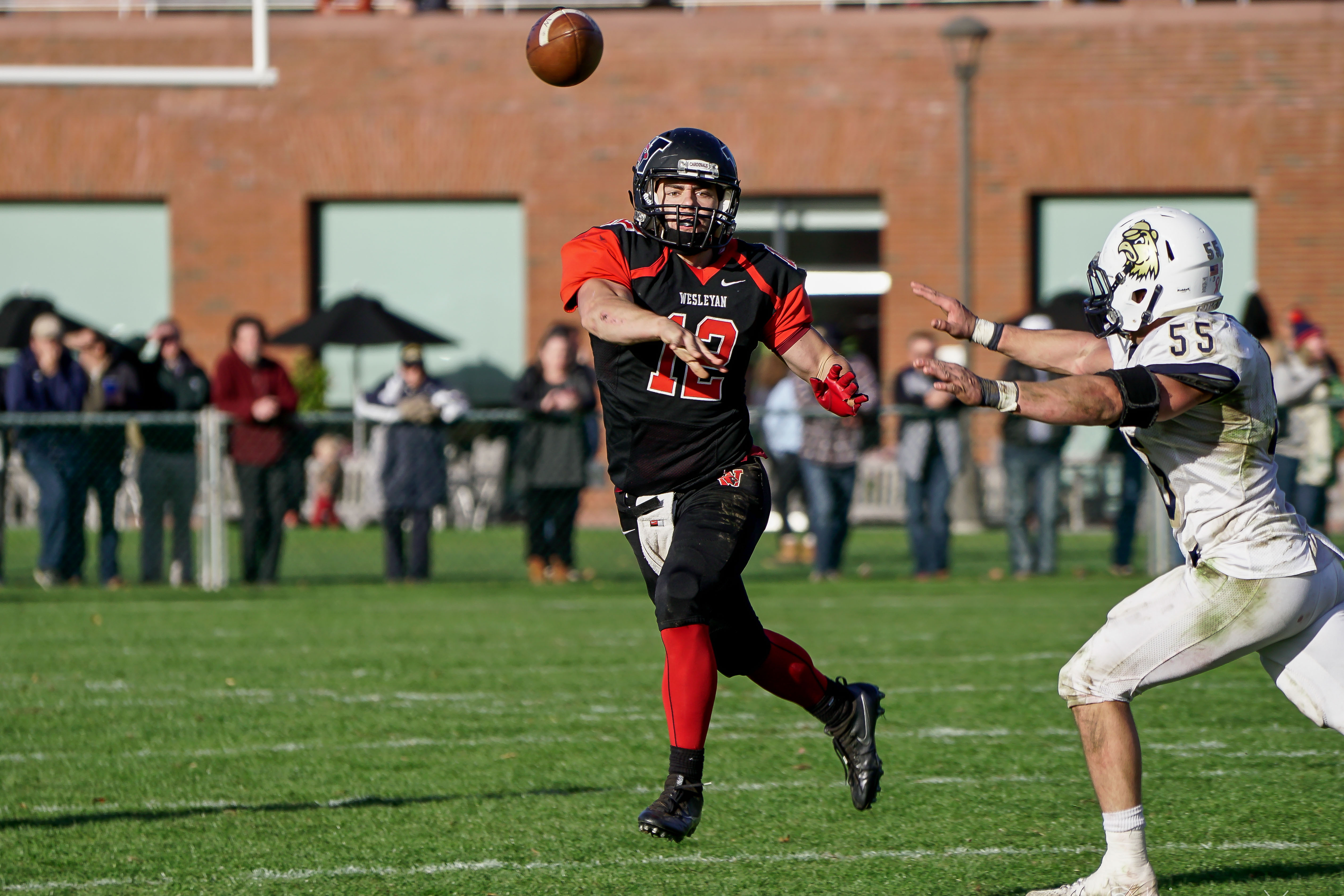 Wesleyan football took on the Trinity Bantams this past Saturday at Corwin Stadium. This was an important game, a local rivalry, and also an opportunity to decide the NESCAC Championship. With the win, Trinity was crowned the sole victor of the NESCAC conference. Wesleyan had a chance to split the title three ways had they had been able to pull out the win. This didn’t come to pass, however, as the Cardinals fell behind early on their way to a 45-21 defeat.

“We prepare the same way every week,” Coach Dan DiCenzo said. “They’re a good team, we’re a good team, obviously we had some things that didn’t go our way, but we were excited about the game.”

The Cardinals started on defense and played well on the first drive, getting a sack on third down which forced a punt. In their first offensive possession, QB Mark Piccirillo ’19 rushed three times and RB Lou Stevens ’17 capped the drive with a 29-yard touchdown run to put the Cardinals up 7-0.

On the next drive, Trinity got one first down, but again the defense held up and had a big third down sack. When the Bantams went to punt, the kick was partially blocked, so the Cardinals started on the Trinity side of the field. The offense drove 48 yards down the field, highlighted by three Piccirillo runs and a four-yard Devon Carrillo ’17 touchdown rush to put the Cardinals up 14-0.

On the ensuing kickoff, the Bantams’ Darrien Myers returned the ball 98 yards, making several Cardinal defenders miss and putting Trinity on the board.

“The kid made a heck of a play but I think we missed five tackles on the return,” DiCenzo said.

Just 17 seconds later, the Bantam’s defense forced a fumble and returned it 32 yards for another touchdown to tie the game.

Wesleyan punted on its next drive and Myers made another big play, returning Ike Fuchs ’17’s punt to Wesleyan’s 37-yard line. The Bantams capitalized on the good field position and scored another touchdown to take their first lead of the game, 21-14.

The next Wesleyan drive ended in a three and out and Trinity again capitalized, this time on a 58-yard pass from QB Sonny Puzzo to Bryan Vieira. The next two drives ended in a punt for each team. On the following Cardinal possession, the offense found itself too far to kick a field goal but too close to punt and elected to go for it on fourth down. It did not convert, giving the ball to the Bantams at their 37-yard line with just under five minutes left in the first half.

From there, Trinity went on to score another touchdown, increasing their lead to 35-14 with 2:59 left in the first half. On the final drive of the half, Wesleyan drove it to the Trinity 28 but could not score before the half ended.

Coming out on offense, the Cardinals drove all the way to the Trinity one-yard line. However, Carrillo fumbled the ball and Trinity recovered, spoiling a great scoring opportunity. The next two drives featured punts from each team and again, Trinity had a big return, this time a return to the Wesleyan 31-yard line. Three plays later Vieira scored his second touchdown of the game, this time a 25-yard reception to push the lead to 42-14 in favor of Trinity.

The following drive ended in a Piccirillo interception. The defense managed to hold Trinity to a punt and the offense drove to the Trinity 16-yard line. Down big, the Cards decided to go for it and did not convert on fourth down in the red zone. After forcing the Bantams to punt, the offense finally got on track again, led by four Piccirillo passes. The drive ended in a Mike Breuler ’18 touchdown reception to cut the lead to 42-21 with just over 10 minutes left in the game.

On the following Trinity drive, however, the Bantams did a good job of driving down the field, keeping the ball and kicking a field goal to put their point total to 45. Four drives followed but the score remained the same.

The loss concludes the season for the Cardinals. They finished the year 6-2, good for a tie for third place in the NESCAC. However, they can highlight a Little Three Championship as part of a very successful season.

For the season the Cardinals were led by Piccirillo, who passed for 1,618 yards and 10 touchdowns with only two interceptions. He also led the team in rushing with 79 rushes for 416 yards. However, the Cardinal rushing attack was multifaceted. Stevens and Dario Highsmith ’20 were also important contributors while Carrillo was a factor in pretty much the entire offense: running, receiving, and even playing quarterback.

On defense, Shayne Kaminski ’18 and Brandon Morris ’19 were the leading tacklers with 61 each. Jordan Stone ’17, the team leader in sacks, will be graduating.

“I’m very proud of our seniors,” DiCenzo said. “They’ve done a great job and have been a part of the turnaround for our program. However, our goal every year is to win a championship, and we didn’t get that done, so we have something to work towards next year.”