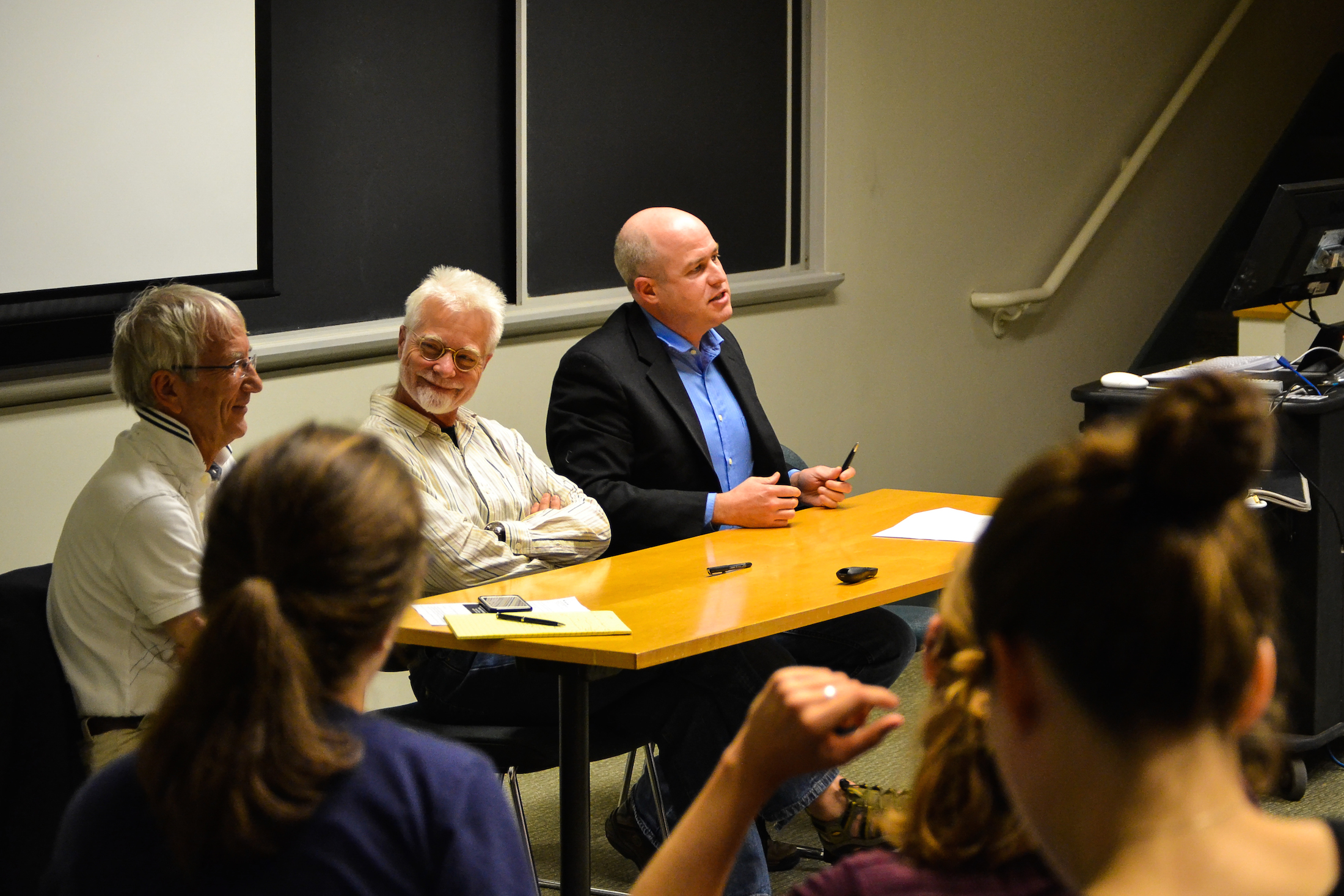 The talk was held just a few days before this year’s general election in order to give attendees information on the presidential candidates’ stances on climate change. The talk also discussed effective climate policies. The discussion was structured with each of the three panelists receiving 15 minutes to speak, followed by a question and answer session.

Stewart discussed the increases in global carbon dioxide levels, presenting animated graphs and data evidence to back the increases. Because the Earth’s climate is cyclical, however, there is a chance that these increases are not caused by humans.

“There’s a chance that it’s not anthropogenic, and that’s what some people fixate on,” Stewart said. “This is disingenuous, however.”

He showed several graphics representing the impact of climate change, especially the increases in global average temperatures. He stated that places like Greenland are losing water quickly.

“You’re only seeing a tip of the iceberg,” Stewart said, displaying a photograph of a glacier. “The current anthropogenic levels of CO2 in oceans should be something of concern to you.”

He ended his discussion with a New York Times editorial displaying the number of questions posed to the presidential candidates from journalists. The number of climate change questions totaled zero.

“That is to say that candidates for President [of] the United States, the most powerful nation in the world, who are aware of the environmental issues that we are thrusting ourselves into do not exist,” Stewart said.

He also spoke about the recent Paris Agreement, a global agreement for the reduction of climate change, which was negotiated at the 2015 United Nations Climate Change Conference in Paris. It was signed by 174 countries, including the United States.

“Some countries gave up some of the stuff they wanted [in the treaty] so the United States could have what they needed to introduce the Paris treaty,” Nelson said.

As one of the largest countries and largest contributors to climate change, it was imperative that the United States signed onto the agreement.

Nelson also spoke to the potential effects if either presidential candidate won the race.

“Most of us expect that if Hillary Clinton is elected, there would not be that much change…mostly the same path to go forward,” Nelson said. “But if Trump is elected, according to the Sierra Club, he would be the only political leader who has denied climate change. And this includes Putin and Kim Jong-un.”

With the ratification of the Paris Agreement in the Senate, Nelson explained several possible ways that Trump could get out of the treaty. There is no way for courts to hold him accountable, and similarly, though it is held up by international law, the only punishment for leaving the Agreement would be a public shaming of sorts.

Yohe discussed his experiences in working with the Intergovernmental Climate Change Commission (IPCC) and the work that it takes to enact climate change policies.

“A long time ago I was sitting on that side of the room instead of this side of the room, and I was pulling all-nighters, but that was because I had a test the next day,” Yohe said. “But in the past 20 years, the only all-nighters I pulled were in IPCC meetings where everyone is sitting there harping about this or that.”

Though some of the countries rotated representatives, he noted that in some cases, representatives from countries had to be awake for four consecutive days to take parts in the discussions.

Ultimately, the IPCC is forbidden by its charter to make policy recommendations. They provide the information needed to make policy decisions but they do not come out and say that it has to be a certain way.

He also spoke about the potential impact of the Paris Agreement, noting that it came into effect last Friday, or the day after the discussion. However, like Nelson, he noted that there would be no ultimate punishment if the United States were to not follow along.

“Tomorrow is a big day, it comes into force,” Yohe said. “It becomes a binding international agreement; if we violate it everyone is going to yell at us and we’ll be embarrassed, but that’s happened before.”

Questions asked during the Q&A section of the discussion covered the recent #NODAPL movement that is spreading throughout social media, as well as a question on the most effective way to stop carbon emissions. The immediate and unanimous answer by all three panelists was to tax carbon.