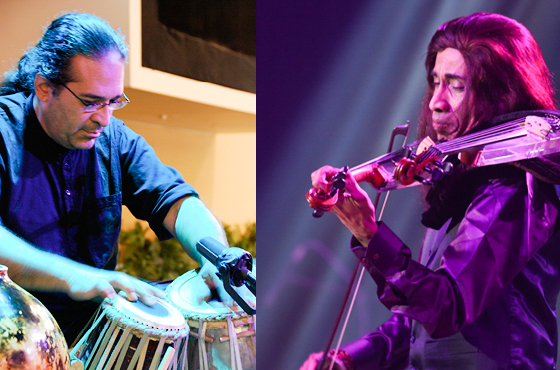 At 8 p.m. on Saturday, Oct. 29, audiences packed Crowell Concert Hall to hear world-renowned composer and musical innovator L. Shankar Ph.D. ’74 (also known as Shenkar). His performance was one of six events that occurred this past weekend during the University’s 40th annual Navaratri Festival, celebrating traditional Indian music and dance. L. Shankar captivated listeners for a 110-minute concert, displaying his years of classical training with the entire range of a string orchestra at his fingertips.

“Shenkar created and designed his own invention, the ten-string stereophonic double violin, built for him by Kevin Parker,” reads the concert’s program on Shankar’s instrument of choice for the concert.

Shankar, an alumnus of the University’s ethnomusicology graduate program, was accompanied by the storied world music educator and percussionist Christopher Garcia, known for his expertise in jazz, avant-garde, and both indigenous and traditional Mexican music.

“It’s great to be here, fantastic,” Shankar said in an interview after the concert with The Argus. “Wesleyan is one of the very few universities in America which supports a world music program, which is really amazing. When I first came to America, this was my home.”

The stage was set with a platform shrouded in rugs, on which the musicians sat. Another massive rug hung like a tapestry on the back wall, delivering a wide spectrum of colors to the otherwise bare wooden Crowell stage. The musicians sat with legs crossed, playing a total of six songs. Every track delivered unique emotional resonance. The concert began fast-paced and gradually became more somber toward the middle, only to then pick back up for the final two songs.

Shankar manually controlled a public address system for the instrumental mics on stage and began each song by adjusting a backing sitar track to fit the ensuing time signature and raga. Garcia’s drumming cut through, complemented, and grounded the reverberating echoes of Shankar’s masterful slides on the violin throughout the hall.

Highlights included Garcia’s percussion solo in the fifth track, in which he built upon various rhythms for several uninterrupted minutes, beating every drum in front of him, including tapping his face to a comedic, yet fascinating effect; another highlight was Shankar’s singing on the fourth track. Skankar, with his five-and-a-half octave vocal range, engrossed audiences with his unparalleled vocal ability over a skillful series of plucks and bends on his 10-string stereophonic double violin.

Shankar’s notable works include (but certainly are not limited to) one of his early bands, Shakti, which he started alongside John McLaughlin in 1975, blending Indian and jazz music. (Shakti refers to the Hindu deity Durga, which coincidentally, the Navaratri festivities honor.) Frank Zappa produced Shankar’s first solo album, Touch Me There, in 1979. Shankar later helped Peter Gabriel with the score in “The Last Temptation of Christ,” eventually winning a Grammy for one of the film’s follow up albums, Passion-Sources. He also scored Mel Gibson’s “The Passion of Christ,” which he is currently performing on tour as a vocalist accompanied by an orchestra. Throughout his storied career, Shankar has worked with Phil Collins, Elton John, Sting, Michael Jackson, Madonna, Bruce Springsteen, Talking Heads, Van Morrison, The Pretenders, and Lou Reed among many others.

“His musical contributions helped sell over 50 million albums through his solo projects and collaborations with other artists where he has been a featured guest as a composer, arranger, producer, singer, violinist and performer,” reads the night’s program.

The Argus had the chance to sit down with both Shankar and Garcia after the performance.

This wasn’t Garcia’s first time at the University, having performed three times here in the early ’90s. Though Garcia has worked with Shankar before, he was called in last minute to step in as percussionist after the planned backing musician had to cancel due to an injury.

“Shankar called me and said, ‘What are you doing on this date?’” Garcia recalled in his interview with The Argus. “Which was two weeks ago. I was thrown into the pool there…We actually only played 6 pieces, but we had 12 [pieces prepared]. It was very, very difficult….It’s wonderful working with him.”

Toward the end of the performance, Shankar expressed his happiness in returning to the University. The last time he was here was for a performance alongside Zakir Hussain in 2000.

“It has been a long journey,” Shankar said.