Brian O’Rourke: The Thinker Behind the Diner 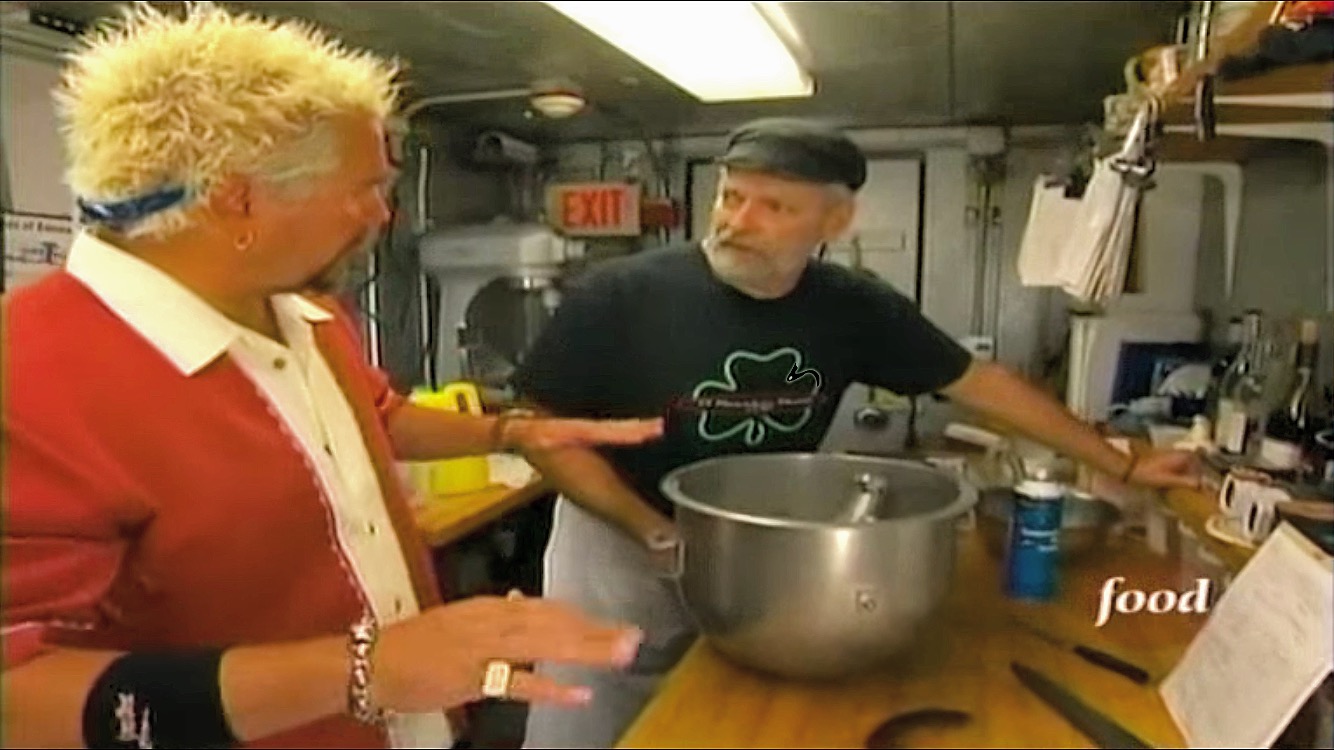 O’Rourke’s Diner is the site of a perpetual pilgrimage, first for fans of owner Brian O’Rourke’s food, and later for those charmed by his eccentricity. From Gordie Howe in his Mr. Hockey golden years to spiced-up blow-hard restauranteur Guy Fieri, or even to the quiet old ladies in the booth with a view of a church tower, the pilgrims of O’Rourke’s all know who the boss is when he emerges from the kitchen.

“This flower here is gonna make the ladies smile,” a bright-eyed and gray-bearded O’Rourke said before appearing in front of the kitchen’s swinging wooden doors, grabbing a Day Lilly on his way to the booth with a view.

Shining as a beacon of the 1950s on the North End of Main Street in Middletown, Conn., O’Rourke’s deflects sunlight off its rebuilt Mountain View rooftop and disperses it through its art deco wrap-around windows. Mountain View, a company that manufactured ready-made diners during World War II, towed the first version of the diner to Middletown in 1946 after Brian’s uncle bought what was the old wooden Dunn’s Diner in 1941. After working 40-hour weeks behind the grill in high school—in addition to delivering The Hartford Courant, The New York Times, and The Middletown Press every morning—Brian purchased the diner with his brother in 1977, and later bought him out to “take the diner to the next level” in 1985. Then, in 2006, a fire destroyed what had been the hub of Middletown’s mornings. Members of the Middletown community, including the University, rallied together to raise over $300,000 to repair the damages not covered by fire insurance. The fire marked the end of what had been a formidable dynasty in Middletown cuisine and New England diners more broadly.

“This is like trying to rebuild a World Series baseball team from scratch,” O’Rourke said after serving a peach cobbler to the ladies with the flower—on the house, of course. “At one time I knew everybody that walked through the door by name. Not only them, I knew their family, I knew where they were from. I know you’re Jacob, you’re a senior at the University, you speak French, you’re from Albany, New York, or somewhere around there.”

In front of the counter, O’Rourke is a showman, even though he resists almost any title, even conventional ones such as “chef” or “boss.” He brings special cakes to old friends, often customers who have been coming to the diner for over three decades. However, one doesn’t need to be an old friend of O’Rourke to get a baked treat on the house. Before ordering anything, each person who sits down in the diner gets what O’Rourke calls a “lagniappe,” a Louisiana French term for a gratuitous gift given by a merchant before any payment is expected. Often in the form of Irish soda bread, this gesture is deeply personal for O’Rourke.

“When my dad used to come in—my dad died in 1986—when I first started baking bread, I made one loaf a day, coffee cake or something, I would always give him a piece as breakfast,” he said. “That’s where it started. I started giving one piece to all of my friends, and then everybody became my friends, and now it’s a way of life.”

O’Rourke will also personally serve what’s known as “Brian’s Breakfast,” a now iconic staple of the menu. The dish remains a secret to those who order it, and even their servers, until Brian himself takes ingredients to make a dish that purports itself to be different every time.

“I do something that nobody else does,” he said before beckoning me into the kitchen.

Proceed with caution when asking Brian O’Rourke what he’s working on, much less what he has planned for the day. Like a 3D chess player, O’Rourke is operating on multiple planes simultaneously, thinking at least three moves ahead while keeping focus on the task at hand.

“Julia right now is working on carrots for Vinny. Vinny will make a carrot cake which will be a part of this weekend’s special. Melissa is working on green tomatoes. Tony will tell you about our next appetizer I’m creating, a harvest appetizer from the farm last night,” he said all the while whipping up a mysterious mix of ingredients in a simmering pan. “I’m working on this apple cider and corn beef with apple butter, and there’s the makings for a soup that we’re donating to a soup kitchen.”

Deeper into the kitchen, O’Rourke lowers his head to fit his six foot-plus frame more comfortably into a cozy office, which in turn leads to a series of freezers. Although the diner looks no bigger than an RV from the outside, O’Rourke is able to cram weeks’ worth of ingredients in freezers with different preset temperatures, depending on his culinary ambitions.

“I don’t compete against anybody but myself,” he said as the frozen door swung closed behind us. “The way I’m trying to define my life is about today and how to get to tomorrow, and how to make tomorrow a better place.”

Beneath the solo chess match taking place in his head, O’Rourke carries with him decades of Middletown history, along with its ebbs, flows, and nadir.

He took a breath and let the pan next to him simmer out.

“There was a chocolate shop,” O’Rourke continued. “There was a cigar store. There were sweat shops on this block where there were 150 women making suits for New York firms.”

Then, the post-industrial bust hit, and by the 1980s, O’Rourke found himself in a much different Middletown, especially around his diner on what has been known as the infamous North End. Yet he’s cautious about delving too deeply into the darker parts of Middletown’s past, especially while maneuvering pots, pans, and plates around the kitchen with a line out the door of the diner.

“I try not to look backwards, because there’s a lot of history there,” he said, now shifting hash browns around on the grill. “The low point of Main Street Middletown was probably in the 80s. The North End was sad. There was nothing on this block.”

But then, with a flip of a spatula and a brisk walk back toward the counter, O’Rourke deftly pivots to the present, and the progress that Main Street has made on the North End, citing Eli Cannon’s, the Community Health Center, Krust Pizza, and a little known philosophy.

“The philosophy we have here is a pretty good philosophy,” he said while peering through the order-up window. “It’s called O’Rourkism. Today, what we’re doing is not only having a great day, but today I’m getting a lesson from a Thai woman to make drunken noodles.”

A few hours later, after the sun had set and the Mountain View roof finally had a break from reflecting the sun, O’Rourke invited some close friends back to the diner after-hours for an authentic Thai dinner. One of the honored guests was Tess Williams ’19, an international student from Thailand who first met O’Rourke during orientation. After the diner mogul asked where she was from, Williams and her father were invited to dine with O’Rourke later that evening when it was revealed that by the end of their breakfast that they did not have dinner plans yet.

“He was an incredible host, and invited us to dinner that night,” she said. “It was a great connection that I’ll never forget.”

In contrast to his hectic morning, O’Rourke had the opportunity to relax in good company as his friend Sandy, the Thai chef, prepared drunken noodles in a kitchen normally reserved for gourmet burgers and omelets. Surrounded by close friends, the normally fleet-footed and articulate chef suddenly found himself relaxed and reserved. His friends, however, were more than happy to illuminate what O’Rourke’s humility keeps hidden in the shade.

“He’s very caring,” said Hajley Anastasis, a longtime waitress at the diner who stopped by to catch up with Brian and take Sandy’s sticky rice back to her kids at home. “He’s extremely creative, always has a list in his head, is very particular, but always makes you happy, and he’s always there for you no matter what.”

As his friends said their goodbyes, and with more conviction in their thank yous, Brian helped Sandy clean up, getting ready for another day. By 5:45 a.m. the next morning, Brian O’Rourke would be back at the diner, ready to make his pilgrims smile as they stepped into that beacon on the North End.