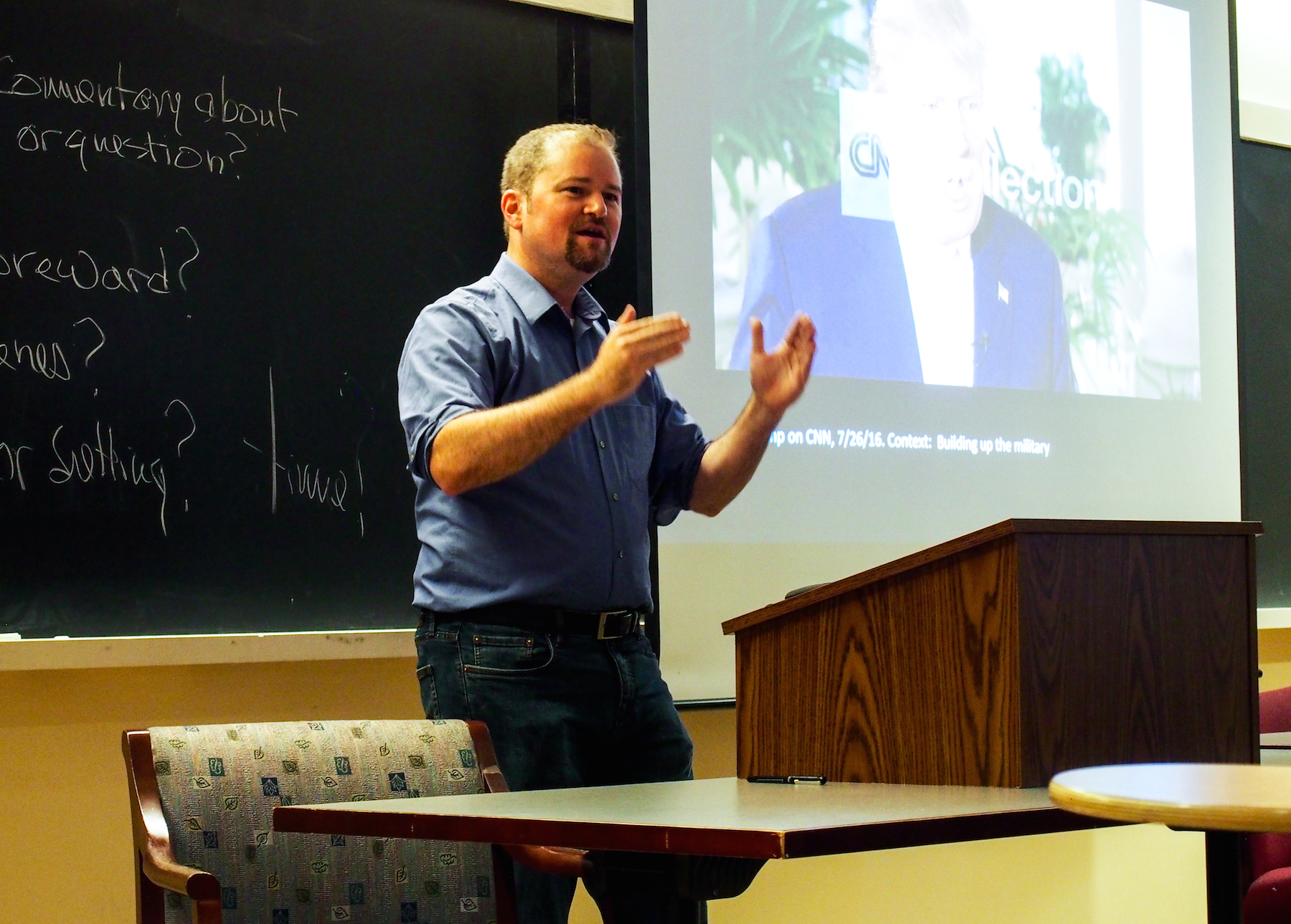 On Thursday, Oct. 13, the University’s History Department hosted a talk by alumnus and journalist David Perry ’95 in Downey House. The talk, entitled “Life as the Unofficial Medievalist to CNN,” ranged beyond the topics of journalism and medievalism. Perry spoke about a variety of elements relating to the evolution of his career and life, with a special focus on how medieval studies, disability rights, and writing all intersected in his career.

Perry opened his talk with a quote from presidential nominee Donald Trump. Perry, highlighting Trump’s tendency to refer to ISIS as “medieval,” noted that in contemporary society, we use medieval as a term to describe something removed from us, as something sinister. As a Medieval Studies major at the University and a history professor at Dominican University, Perry noted that the negative Trumpian assessment of medieval culture is actually inaccurate. In addition, he believes that medieval studies can be applied to contemporary issues.

Perry then moved into a discussion of his own career, including receiving his MA and PhD from the University of Minnesota, and his time in Venice as a teacher at a small Catholic school. Perry discussed his continuing interest in medieval studies and how this interest manifested itself in his work and writing.

Perry thought it would also be important to include some information on his personal life, since, as he notes, his personal experiences have had a large impact on his academic career. Perry explained that after receiving his PhD, he had two children, one of whom has Down Syndrome. He explained that he began to study and learn about the genetic disorder, gaining what he felt amounted to a graduate-level education in the subject. It was through the experience that he began writing journalistic pieces.

“Almost exactly eight years ago, I wrote a little piece about Sarah Palin and the discourse of Down Syndrome [that was] critical of the ways in which both the left and the right were talking about [Palin’s] son, and talking about Down’s Syndrome,” Perry said. “I had a lot of things to say about that.”

Along with his journalistic work, Perry also discussed some of the stereotypes that are used to describe people with Down Syndrome, both positive and negative. He explained that after Ann Coulter referred to President Barack Obama as a “retard,” there was a lot of backlash from around the country. This backlash, while well-intentioned, still reinforced a stereotypical image of people with Down Syndrome as angels.

Perry wrote a 900-word article about this topic, which he submitted through a friend to CNN. CNN published the article, which helped solidify Perry’s future relationship with the company. While this was, at the time, one of the few articles that Perry had published, that would soon change. It was after publishing this article, 16 years after graduating from the University, that Perry’s life changed forever in a very atypical fashion.

“The thing that changed my life was that on February 12th, 2013, Pope Benedict retired,” Perry said. “Kind of a weird thing, right? Totally life-changing.”

“[They said] pretty much in unison, that this hadn’t happened since 1406 when Pope Gregory the 12th had retired,” Perry said.

Perry realized, however, that this information was inadequate and didn’t tell the whole story.

Perry detailed how he posted about the anachronistic mistake on Facebook, and friends suggested he write something up and pitch it to a news media source. So Perry did just that, sending an email to CNN, and it took them only three minutes to reply and express interest. Perry spent the rest of the day writing the article, submitted it, and it made the front page of CNNs website that day.

This sparked Perry’s more committed involvement in the world of journalism. According to Perry, the articles he had written gave him what amounted to a fast track to publishing more articles in the future. Perry began writing a variety of pieces on a variety of subjects, including a piece entitled “For strong daughters, stop with the sex stereotypes,” which, according to Perry, got over a million views.

From here, Perry’s writing took another turn in subject. Perry learned of the death of Ethan Saylor, a man with Down Syndrome who was killed by police at a movie theater. Taylor was forcibly thrown to the ground after he did not comply with the police, who then crushed his windpipe.

“I was angry about this,” Perry said. “And I was kind of waiting for the smart journalistic take on it. Mostly what I was seeing was people saying, ‘This is an unbelievably tragedy, how could this have happened?’ as opposed to saying, ‘This is terrible, and this sort of thing happens to people all the time,’ just usually, they’re not suburban white men with Down Syndrome. I wanted someone to say that sentence, and to back it up. And eventually, I decided that maybe the journalist who was gonna have to say that sentence would be me.”

It was at this point that Perry began writing about patterns of targeted individuals of police violence, and how disabilities factored into their victimization. Perry presented a list of names of African American individuals who were known victims of police aggression, including Eric Garner, who had diabetes and congestive heart failure; Michael Brown, who had ADHD; and Sandra Bland, who had epilepsy and depression. One-third to half of all people killed by police have disabilities, noted Perry. He went on to say that there was a lack of material written about this pattern, and that there needed to be an expanded conversation, so he began to write about it.

Perry spoke about this aspect of his work, detailing how he has worked with a variety of groups to promote awareness of the issue. He then devoted the remaining time to discussing other articles he had written and his ongoing blog, as well as the importance of writing every day.

The talk was attended by a variety of individuals, including Sadie Renjilian ’17, a history major, who was there to promote interest in the History Department. Renjilian shared her thoughts on the talk.

On a more humorous note, Renjilian shared one of her favorite parts of the talk.

“There were so many amazing lines,” she said.

One of those lines was a closing line of Perry’s talk: “You can’t prove that I’m not the unofficial medievalist of CNN.”