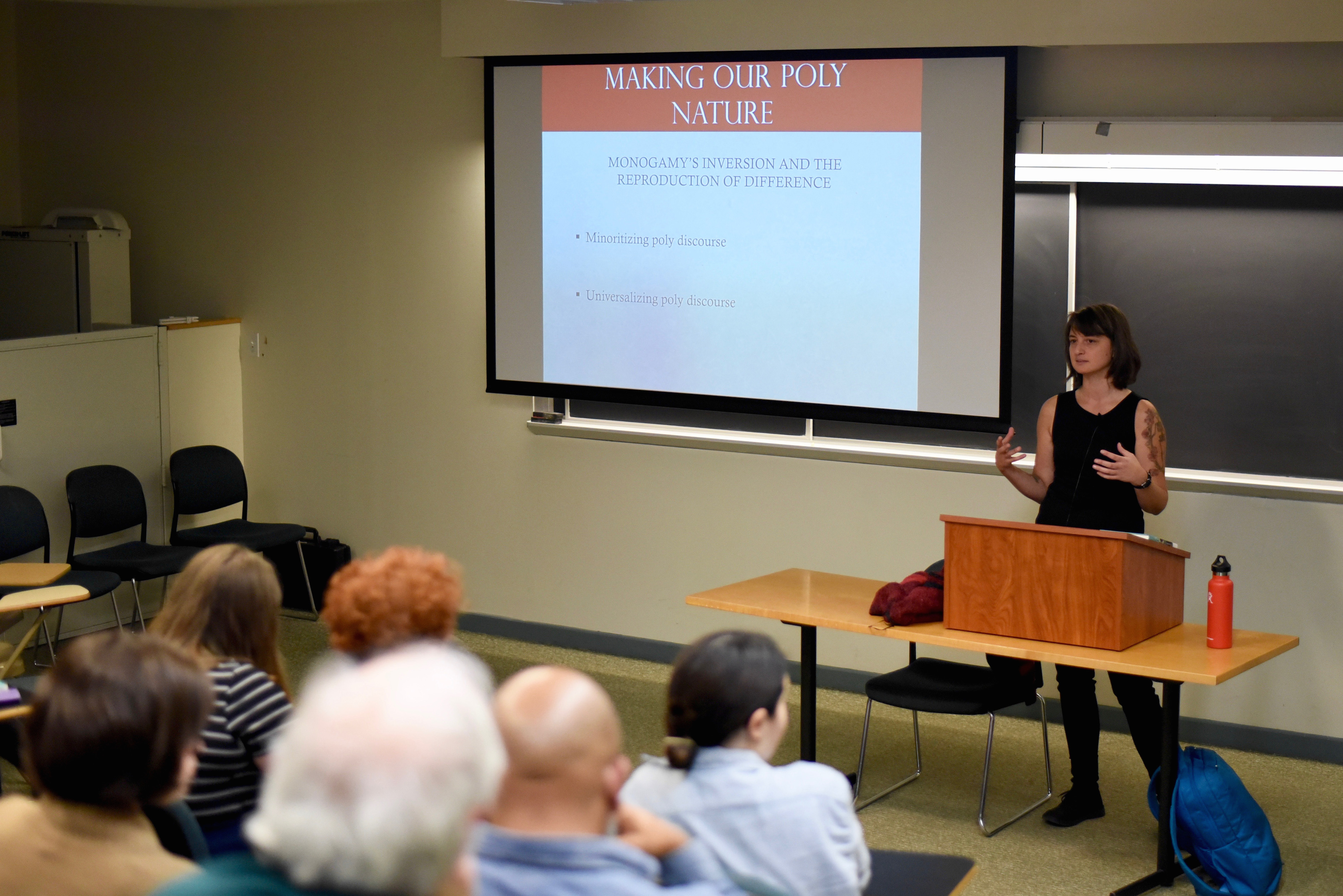 An impressive audience jammed into PAC 001 last Tuesday as Angie Willey, Professor of Women, Gender, and Sexuality Studies at the University of Massachusetts, Amherst prepared to discuss her new book: “Undoing Monogamy: The Politics of Science and the Possibilities of Biology.” The talk, organized by the Feminist, Gender, and Sexuality Studies Department, had to be moved from PAC 002 to accommodate the unexpectedly large crowd.

In her talk, Willey read key excerpts of her work and discussed its major themes and ideas. The program ended with a Q&A session with questions from both students and faculty.

Willey used an interdisciplinary perspective to create epistemological examinations of monogamy. Such a view allowed Willey to reorient many of the traditional notions of monogamy by searching for new modes of conceptualization and new ways of belonging.

One such reorientation focused on the question of whether humans are wired for monogamy. Willey discussed how traditionally, many civilized societies have considered themselves to be so; however, this approach may not be the true nature of humanity. Willey suggests that monogamy has been so ingrained into Western culture that it has perhaps become second nature.

“Willey’s work on monogamy examines how it has been ‘naturalized’ in the sciences as biologically determined even though monogamy is not a universal mode of organizing relations,” she wrote in an email to The Argus.

Although Willey questioned past biological research on monogamy as constricted by naturalization, she did not completely discount the ideas of biology.

“Although she is critical of the sciences of monogamy, Willey does not argue that biology is irrelevant,” Pitts-Taylor wrote. “Instead, she explores how biological bodies regularly defy monogamous norms. She argues for a queerer sense of embodiment as open to multiple kinds of relations. Her ‘dyke ethics’ explores alternate ways of forming relationships and families beyond the two-person dyad.”

Willey discussed how modern society’s construction into monogamous families helps to expand capitalism as resources are distributed through familial units. Such a distribution, Willey suggests, is sometimes at the expense of those not in traditional families. She also pointed to Christian colonialism as a significant factor in the modern view on monogamy.

“Willey also argues that the history of monogamy discourse is shaped by colonialism, where non-monogamous societies have been portrayed as less civilized,” Pitts-Taylor wrote.

Exploring human relationships beyond the two-person unit marked another key point in the talk.

“The lecture partially talked about how the privileging of monogamy undervalues other forms of social life and connection, and the Q and A followed up on this topic when Willey mentioned that there are other ways than human connection to feel intimacy,” said Alexandra Stovicek ’17, an attendee of the event.

This means feelings of intimacy outside of monogamy can take many forms.

“She drew on famous feminist writers such as Audre Lorde to advocate for creative writing and listening to music, for example, as potentially just as intimate and fulfilling,” Stovicek said. “One student pressed her to include social justice activism on that list, a really fulfilling way to end the discussion considering the current campus climate.”

The social activism question mentioned the University’s recent controversy involving the firing of former Associate Dean of Students Scott Backer and protests about the administration’s lack of transparency. Willey did not get into any campus-specific details, but talked about how the communal love felt in the solidarity of activism could be a powerful source of intimacy that people will want to repeat.

Ultimately, the lecture was not a polemic on society’s traditional principle of monogamy, but rather an examination on expanding what human love and intimacy means. Willey used the constructed term “bio-possibilities” to analyze this love and intimacy outside the constrained dyad.

Stovicek also expressed her fascination regarding the discussion.

“Dr. Willey’s gave a great talk that appealed to lots of different majors and students from queer studies, FGSS, SISP, and neuroscience alike [who] attended to hear about how her work intersects with many academic fields,” she said. “The topic itself is timely of course, especially on a college campus. The Q&A portion of the talk was really useful in thinking about the benefits of undoing monogamy.”