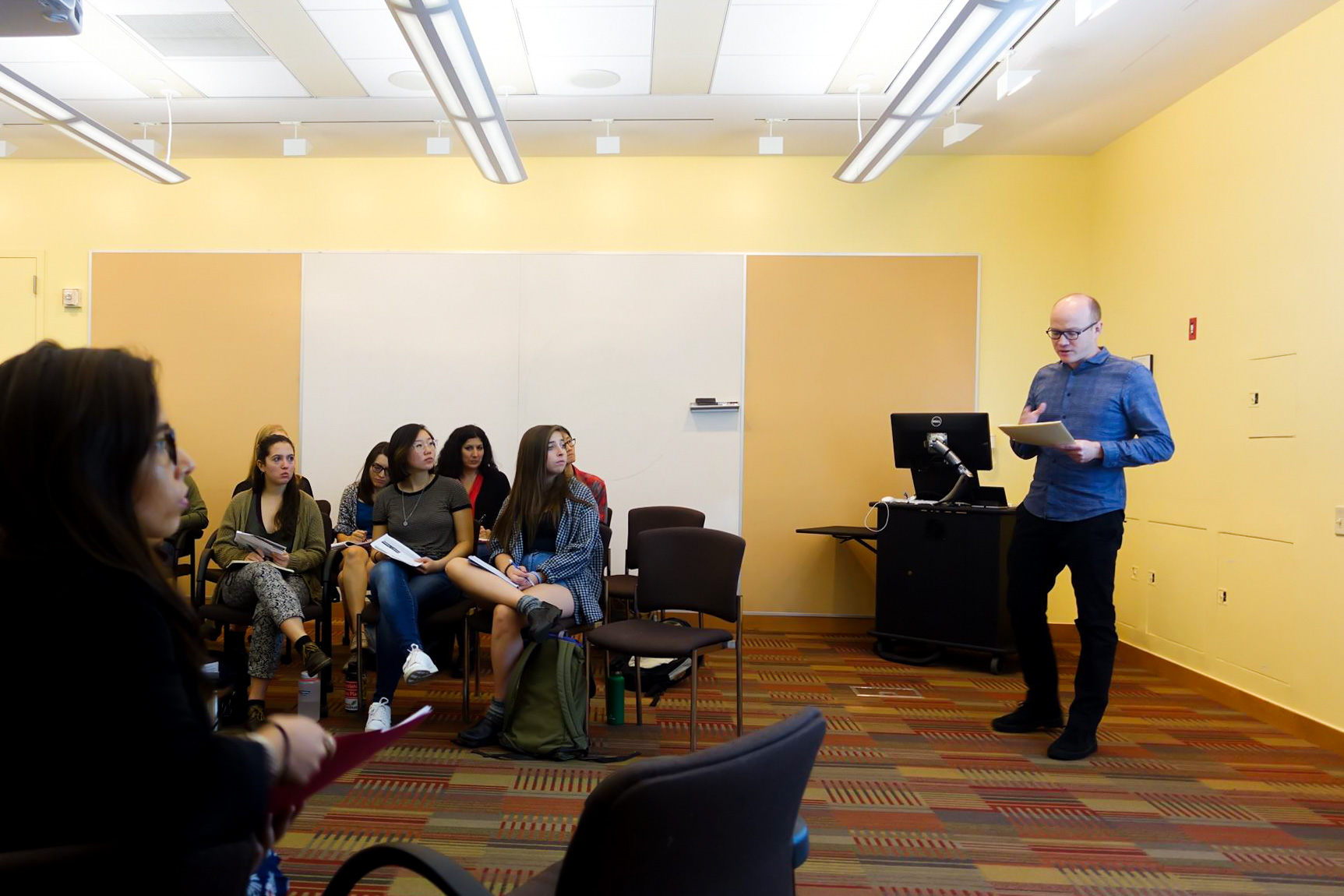 On Tuesday, The Argus published part one of an article about the White Buffalo teach-ins and the Dakota Pipeline. This is a continuation of that article.

“How is this pipeline implicated in longer histories of settler colonialism and extractive capitalism? How do we define these terms, and how do they help us contextualize the pipeline?”

“The first [key feature] is that settler colonizers come to stay,” began University doctoral fellow of American Studies Maria John. “Second, settler-colonial invasion is what we call a ‘structure and not an event’….Third, settler colonialism seeks its own end.”

“[Neoliberal capitalism] refers to a process by which enormous profits are generated through the extraction of finite resources,” John said. “Coal and oil, for example, from beneath the surface of the earth.”

John then pivoted to contextualizing the DAPL land right struggle within these structures.

“These extractive settler economies thus require the continuing pillaging of the land and displacement of indigenous people and their rights on a global level,” John said. “As we’ve seen in the case of the Dakota Access Pipeline Movement, people are speaking up against this because the stakes are indeed global as much as they are local.”

“How do the resistance efforts to stop DAPL emerge as part of ongoing U.S. and global indigenous mobilizations to protect the earth from extractive capitalism and ongoing colonial violence?”

John detailed two other instances of the infringement on indigenous rights in southwestern South Dakota.

The Lakota Nation were followers of the Ghost Dance Movement which called for the revitalization of indigenous cultures against the colonizers. In December 1890, the 7th U.S. Cavalry entered a camp, attempting to disarm a group of Lakota Native Americans. An estimated 150 people were murdered.

More than eighty years later, in February 1973, the Lakota Sioux called for help against a corrupt tribal chairman, Richard Wilson, and his militia. Members of the American Indian Movement (AIM) flooded the town of Wounded Knee and wrested control from Wilson for 71 days. The standoff that ensued ended with activist demands for a Bureau of Indian Affairs investigation into the welfare of reservations in South Dakota and Senate hearings on Indian treaties.

“Their rebellion galvanized people across the country and indeed around the world,” John said. “So the struggle against the Dakota Access Pipeline is rooted in this history. Indeed, the pipeline violates the signed treaty that underwrote the AIM occupation of Wounded Knee.”

“What is the current status of the case? What are the tribal sovereignty issues at stake?”

“The tribe is compelled to work within these dominant [legal] frameworks,” Chair of the American Studies Department Professor J. Kēhaulani Kauanui said. “But the law can’t comprehend something like sacred water….Private property is the bedrock of all of this.”

Kauanui explained that the Standing Rock Sioux first filed the lawsuit against the U.S. Army Corps of Engineers on July 27, 2016. The tribe sued the Army Corps because it is the primary federal agency that provides the necessary permits for pipeline construction projects. Standing Rock Sioux argues that the Army Corps illegally cited the Clean Water Act, the National Historic Preservation Act, and the National Environmental Policy Act when issuing the permits, failing to represent the tribe’s best interests.

“You had the pipeline that would pass under the Missouri River at Lake Ohae just a half mile upstream from the tribe’s reservation boundary,” Kauanui said. “The second issue is that the pipeline would pass through areas of cultural significance, such as their sacred sites and burial grounds that these federal laws are supposed to protect.”

“I can tell you what federal laws are at play,” Kauanui added. “But they’re not really the solution. They’re the laws of the colonizer and they have their own limitations.”

Kauanui says that the Standing Rock Sioux are fearful of a pipeline burst for the regional community.

On Aug. 4, the tribe filed for a preliminary injunction in an attempt to stop the project from continuing until the case was processed as Dakota Access bulldozers continued to arrive on site. On Sept. 4, the tribe filed for a restraining order in another attempt to slow the project until the case could be heard. The tribe called for a 20-mile halt on DAPL development around the water system.

“In terms of the framework, it’s set up in a way that the power balance is on the side of the dominant society,” Kauanui said. “That’s what settler colonialism is.”

With the legal battle thrust into the national spotlight after the viral Democracy Now video, on Sept. 9, the Department of the Interior, the Department of Justice and the United States Army Corps of Engineers released a joint statement requesting Bakken holdings for a voluntary cease.

On Sept. 12, the tribe filed for an injunction pending appeal, requesting the judge make the Sept. 9 joint statement an enforceable requirement. On Sept. 16, the Washington D.C. Court of Appeals issued an official injunction, granting the Sioux their 20-mile restraining order request. Until the court issues a final ruling, this temporary ban will remain in place.

“Does the tribe have a high probability of winning the case at trial?” Kauanui said, closing the teach-in. “No, but it’s not a final ruling. It’s really gonna be tied up in the courts….What we’re dealing with are two incommensurable systems. You’ve got representative government on the one hand with the dog and pony show and then you’ve got a collective entity and then maybe one person gets cherry-picked to sign off on [a treaty]. That’s how a lot of these things went down in the first place.”

For more information, go to Standingrock.org