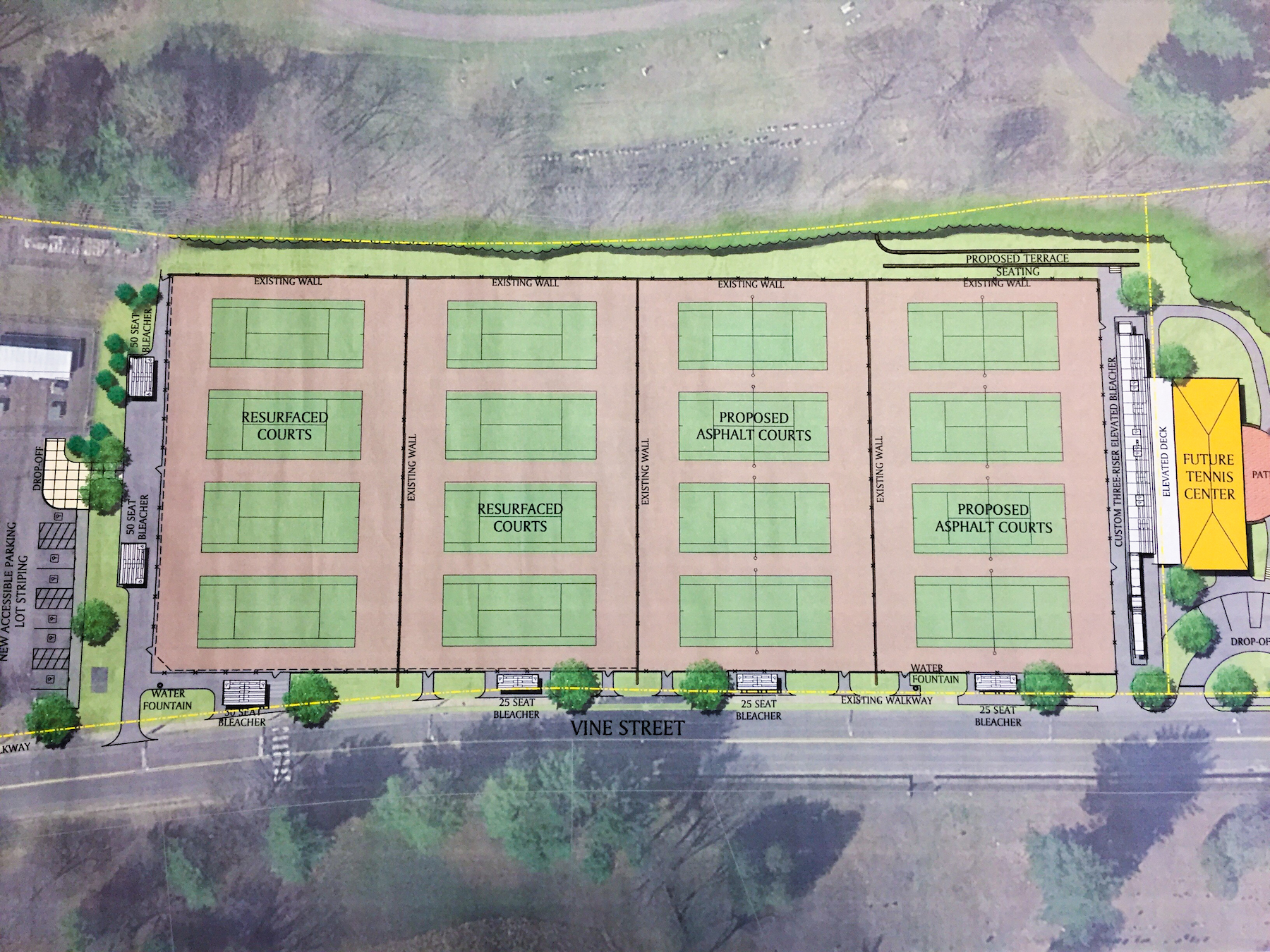 In an effort to display gratitude toward the tennis program for its success over the past few years, a $1.5 million renovation of the facility on Vine Street is now underway. A joint agreement between the city of Middletown and the University will have the parties splitting the cost of the bill.

“The whole process commenced last week, although there were ongoing conversations for over a year now,” Mike Fried, head coach of both the men’s and women’s tennis teams, said. “We finally received the green light a few weeks ago, and it has been pretty amazing how much has happened in the past two weeks.”

The project should take about one year to complete, but with the plan to have the final surface applied next spring, the endeavor has the potential to be finished before the end of the academic year. Wesleyan and Middletown teams would possess the first rights to eight of the courts, with the possibility to play on all 16 if there are no other schedule conflicts.

“The timeline is weather dependent, but the hope is to have the new complex done by the end of next summer, ready for the start of the fall of 2017 season,” said Fried. “We are ripping up and rebuilding the bottom eight courts, which are currently unplayable, and we will be resurfacing the top eight courts, which will still be playable for this season.”

This judgment was made with much prior thought, as the conversation on this topic spans back to three years ago. The Middletown Common Council is permitted to borrow up to $750,000 without receiving voter approval in a referendum.

“The City of Middletown approached our administration three years ago on this project and our administration didn’t think the timing was right,” said Athletic Director Mike Whalen ’83. “However, when we talked last spring about the current condition of the old courts, we decided to contact the city and see if they were still interested in the project. They said they were and that’s how the process started up again.”

Effective negotiation between the two parties can be seen as a positive opportunity to ameliorate the relationship between the University and Middletown.

“Having the opportunity to partner with the city on this project was very important,” Whalen said. “This is a win for the city and for Wesleyan, and come next spring, we will have a new facility which everyone will benefit from.”

“Currently, the courts get a lot of use by the public; however, when our varsity teams are playing or practicing, the courts are closed to the public,” Whalen said. “Now the local residents will have access to the eight courts which will be regulated by the city, and the local high school teams will have courts specifically designated for practice and competitions.”

Fried expanded on the ability to provide more access to both high school players during their spring season, as well as any residents wanting to play recreationally.

“We were able to get this done because of the cooperation with the city and the ability to give high school teams access to the courts during their spring season, which is a major upside for both Wesleyan and Middletown,” Fried said. “We are now able to accommodate everyone with more courts, and the collaboration between both parties really helped this project move along, not to mention the support and excitement from alumni was critical.”

Fried spoke to the conditions of the existing courts, but explained the importance of renovating not only for the quality of the courts, but also for the increased competition that renovation brings in.

“The current courts are pretty good,” Fried said. “In terms of the new facility, we are going to move from one of the lower-end NESCAC tennis facilities to arguably the nicest in the conference.”

Both Fried and Whalen are optimistic that the enhancement of the facility will create many more opportunities to host events in Middletown.

“Currently, both our men’s and women’s teams are ranked in the top 10 for Division III nationally, so we anticipate that this new venue will provide a big boost to our programs,” Whalen said. “We also expect that the local high school teams will now be able to host some state championship events as well. Currently, we host state high school championship events in our hockey rink and our pool.”

The University will take point on the construction project and is hoping to build bleachers and bathrooms in the near future.

“The little details of the new facility will be extremely impactful,” Fried said. “One of these ideas is setting up multiple places to view the matches. Not only will there be new bleachers, but also terrace seating, which will create a similar vibe to Foss Hill. The additions of fencing, concrete walking, landscaping, upgraded water fountains, and eventually restrooms will all contribute to the prosperity of the facility.”

The fresh tennis facility will bolster confidence not only for the varsity athletes, but also the community at large.

“I think we are really excited with what is happening, although it has not completely sunk in yet,” Fried said. “It is hard to grasp that this process is moving as rapidly as it is. Jumping up to one of the nicest tennis facilities in the conference, perhaps even amongst all Division III schools nationally, is really exhilarating and adds another level of enthusiasm amongst our current team members, alumni, and recruits.”