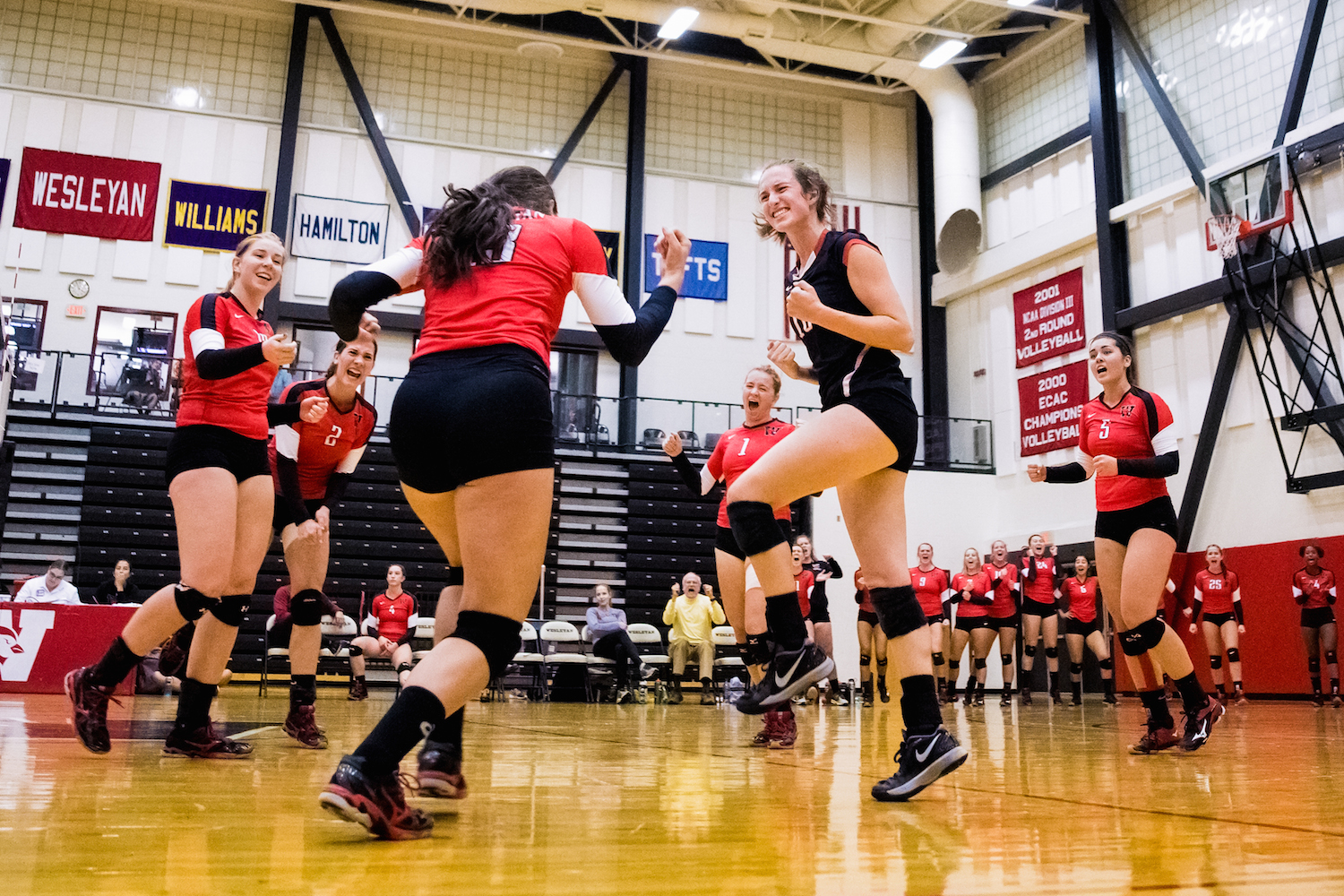 Volleyball came from behind to overcome Trinity in an exciting five-set match on Friday, Sept. 23 at Trinity’s Oosting Gym. The team returned to Trinity for a double-header the following day, where it glided past Husson University and Colby-Sawyer College, sweeping both teams in three sets.

Wesleyan took to the court with an aggressive offense, going up 4-0 to open the first set against a potent Bantam squad. However, the Cards’ explosive opening did not last long against an undaunted Trinity. Down 8-4, the Bantams retaliated with five unanswered points, giving them a lead that the Cards, for all their offensive firepower, could not overcome. Despite racking up an impressive 12 kills in the first set, Wesleyan lost it 25-20.

The second set was more even. The teams played steadily against one another until reaching a score of 19-18 with Trinity up. Wesleyan, determined to prevent the match from slipping away, played hard and pulled out the set 25-22.

The Cards’ momentum died as they entered the third set, with the Bantams taking a strong lead at 10-5. Wesleyan’s defense struggled against Trinity’s powerful Hannah Engstrom, who would go on to record 12 kills throughout the course of the match. The Bantams also profited from a strong serving game, posting a total of 13 aces in the match. Despite a tough effort by Wes to stay in the set, the Bantams emerged victorious by a score of 25-22.

Teetering on the verge of their first NESCAC loss, the Cards charged into the fourth set. At first, Trinity kept even with Wesleyan, leveling the score at 7-7. Wesleyan soon pulled away, however, going on a series of point runs to grab a commanding lead at 22-16. Trinity rattled Wesleyan with some great play toward the end of the set, but the Cards kept it together to win the set 25-22.

Wesleyan powered into an exciting fifth set, beginning with an early run to give the team the lead at 5-1. A Trinity timeout slowed the Cards, who saw their commanding lead reduced to a narrow 7-5. However, Wesleyan did not falter under the pressure, and the Cards went on to capture the set 15-9, clinching the match in a thrilling fashion. The win marked the Cardinals’ third consecutive victory over NESCAC opponents.

Sarah Swenson ’18 and Nicole Hilton ’20 played fantastically at net throughout the match, posting 15 and 12 kills, respectively. Also, the team played very well as a defensive whole, recording 12 blocks, 70 digs, and a .292 hitting percentage.

The first match on Saturday began with an aggressive Wesleyan offense securing the court against Colby-Sawyer. The Cards won the first set handily 25-13. Though their momentum slowed slightly throughout the course of the match, the Cards still managed to take the second and third sets 25-16 and 25-20, respectively.

The second match of the day against Husson proved a far rockier start for the Cards, as they fought to win the set 25-20. The team then went on to pick up the next two sets 25-15 and 25-10, playing with a solid hitting percentage of .320.

With the three wins, Wesleyan now has an 8-1 record, with the team’s only loss coming from the close match against Western Connecticut State University.

The players were motivated by the weekend’s victories and pleased that they were able to maintain their undefeated streak in NESCAC play.

“The games went really well,” Captain Rachel Savage ’17 said. “It was great to pull through another NESCAC win. It gives us more confidence going into this next weekend, but in no way complacency. We continued to work hard in our two out-of-conference games on Saturday, and while we also pulled out wins, the matches also helped us to realize what we need to work on during practice this week.”

These matches will hopefully act as a momentum builder going into next week’s conference match. Wesleyan will be playing at home against Tufts at 7 p.m.

Tufts is expected to pose a formidable threat to the Cards’ seven-game winning streak. The Jumbos have already defeated both of Wesleyan’s Little Three partners, beating Williams 3-1 and easily sweeping Amherst 3-0. Tufts has an impressive 9-1 record, with its only loss coming from an out-of-conference matchup against UMass Boston.

In addition to maintaining their untarnished NESCAC record, the Cards are also looking to redeem themselves after being swept by Tufts the past three years. Wesleyan has not defeated Tufts since 2006. While Tufts currently sits at the top of the NESCAC conference standings, a win over the Jumbos would catapult the Cards to first place in the ’CAC.