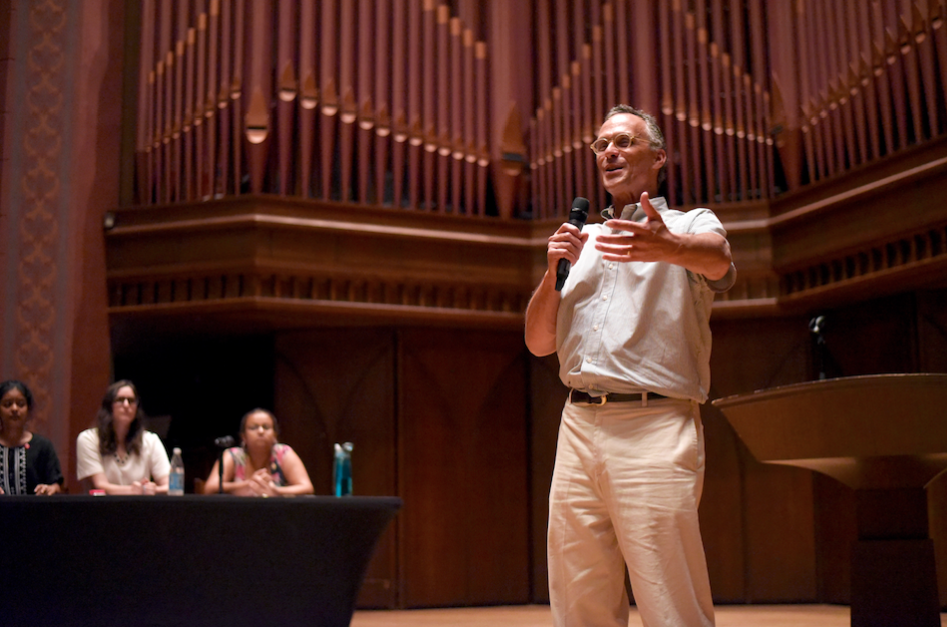 “My goal is not to reject students,” Roth said. “My goal is to add more value to the diplomas you take when you graduate from Wesleyan. [The University’s competitive acceptance rate] is one vehicle that allows people to recognize the quality of the education Wesleyan offers.”

“I want to attract more qualified low-income students who will benefit from a Wesleyan education,” Roth said.

Roth followed by outlining how the University has invested in areas that students have signaled as being especially vital to their quality of life at school. Student loan debt was one issue Roth touched on repeatedly. While the University claims it meets the financial needs of all students, Roth believes this is a truly subjective phrase. If students are forced to take demanding work-study hours to pay off loans, their experience at the University may be compromised. He hopes to be able to extend the University’s no-loan plan beyond those who are eligible for Pell Grant status.

Henry Vansant ’18, who attended Roth’s address, appreciated the sentiments evoked but remains worried about the lack of a concrete plan to improve the experience of work-study students.

“I was one of the main sponsors of the minimum wage resolution that the WSA passed, so that was something I was really concerned about,” he said. “While President Roth expressed concern about work-study students and how to alleviate the burden of high hours of work, unfavorable jobs, and financial difficulties, he would not commit to a policy that would radically improve work-study.”

Roth also acknowledged that there is a challenging trade-off that administrators face when deciding how to optimally allocate relief funds. The University tries to both reduce the pain of students who are in higher income brackets but still require aid, while simultaneously ensuring that students on Pell Grants are able to afford attending college. Roth emphasized that, although the endowment has grown from $521.9 million to $838.8 million in five years (with a 6.1 percent return last fiscal year), there are still limitations on the scope of what the administration can achieve.

Roth also described his plans to recruit more minority faculty. In the last few years, two-thirds of the faculty the University hired have been non-white. However, several professors who are women of color left the University last year for positions at other institutions.

“We have momentum in hiring faculty from underrepresented groups,” Roth said. “By diversifying the University’s faculty, the curriculum will become further diversified as well. The problem is when Wesleyan professors are offered positions at schools like Harvard where they can focus on their research rather than teach. I can offer them competitive pay to stay at Wesleyan, but I cannot allow them not to teach. We are too small, and we do not want diversity in the curriculum and not in the classroom.”

Perhaps the institutional change that Roth was most excited about was the University’s decision to refinance its debt. Roth joked that he hoped students would not fall asleep as he began to point out the usefulness of refinancing. The University has been paying off a $200 million loan that Roth’s predecessor Douglas Bennett took out over a decade ago to pay for building renovations. With the help of a 100-year refinancing package, University economists have forecasted that approximately $250 million will be saved in the process.

Finally, Roth outlined initiatives to direct resources to academic areas that are being stretched thin by high levels of student demand, such as creative writing.

“I want to enable every Wesleyan student to be able to do a project beyond the scope of a particular class, which I don’t think is really possible now,” Roth said. “The purpose of this is to be able to find someone whom you consider a colleague and a mentor. It’s hard at Wesleyan to consistently create that bond by working on an independent project.”

Roth continued by answering questions that students had submitted to the moderators this past week. One especially fraught topic concerned a statement that Vice President for Equity and Inclusion Antonio Farias made in a 2014 Argus article about work-study students. The comment resurfaced last year in a Wesleying post about the Fight for $15 campaign.

“We know that some students want to mimic a lifestyle that they’re not part of,” Farias said in the 2014 Argus article. “They’re working-class kids that want to mimic a lifestyle that is very middle class or upper middle class because they feel that going out to lunch with someone, everyone else throws down their money, and they have to sort of count… People make choices about needs and wants. We cover 100 percent of your need, but we’re not necessarily going to cover your wants.”

With the conversation over University student and employee wages continuing into this year, Roth defended the work Farias has done to support low-income students.

“That [comment] isn’t representative of the Antonio Farias who I know and the man who is committed every day to low-income students,” Roth said. “We still have problems. People don’t have the financial aid package they need to thrive or enough meal points to make it through the semester. So we created a program for people who run out of points to continue to afford campus dining. We can’t make everyone equal, but we can make sure everyone’s needs are met.”

Other questions involved the University’s decision to allow undocumented students to apply to the University as domestic applicants starting next fall, greatly improving their chances at acceptance. Roth emphasized programs on campus, such as the First Generation Group and Class Matters, that provide support for students who feel the University is a foreign setting when they first arrive.

“We’re trying to create a web of support so it’s not just like we are bringing these students in to make ourselves feel better or make our diversity numbers look good,” Roth said.

A graduate of the class of 1978 and a first-generation student himself, Roth reflected on the disconnect he felt when he first began attending college.

“I had never been around so many people who were very wealthy,” Roth said. “They had gone to nice private schools; the only reason you went to private school in my town is if you got kicked out of public school. I wondered what the hell I was doing here.”

A main theme of the night was Roth’s role as a mediator in the push-and-pull between student activists and members of the Board of Trustees over the pace of change at the University.

“The Wesleyan student body is never satisfied, and I see this as a powerful engine to make the school a better place,” Roth said. “I believe that your demand to make this a more just and equitable institution is the antidote to smugness at elite schools.”