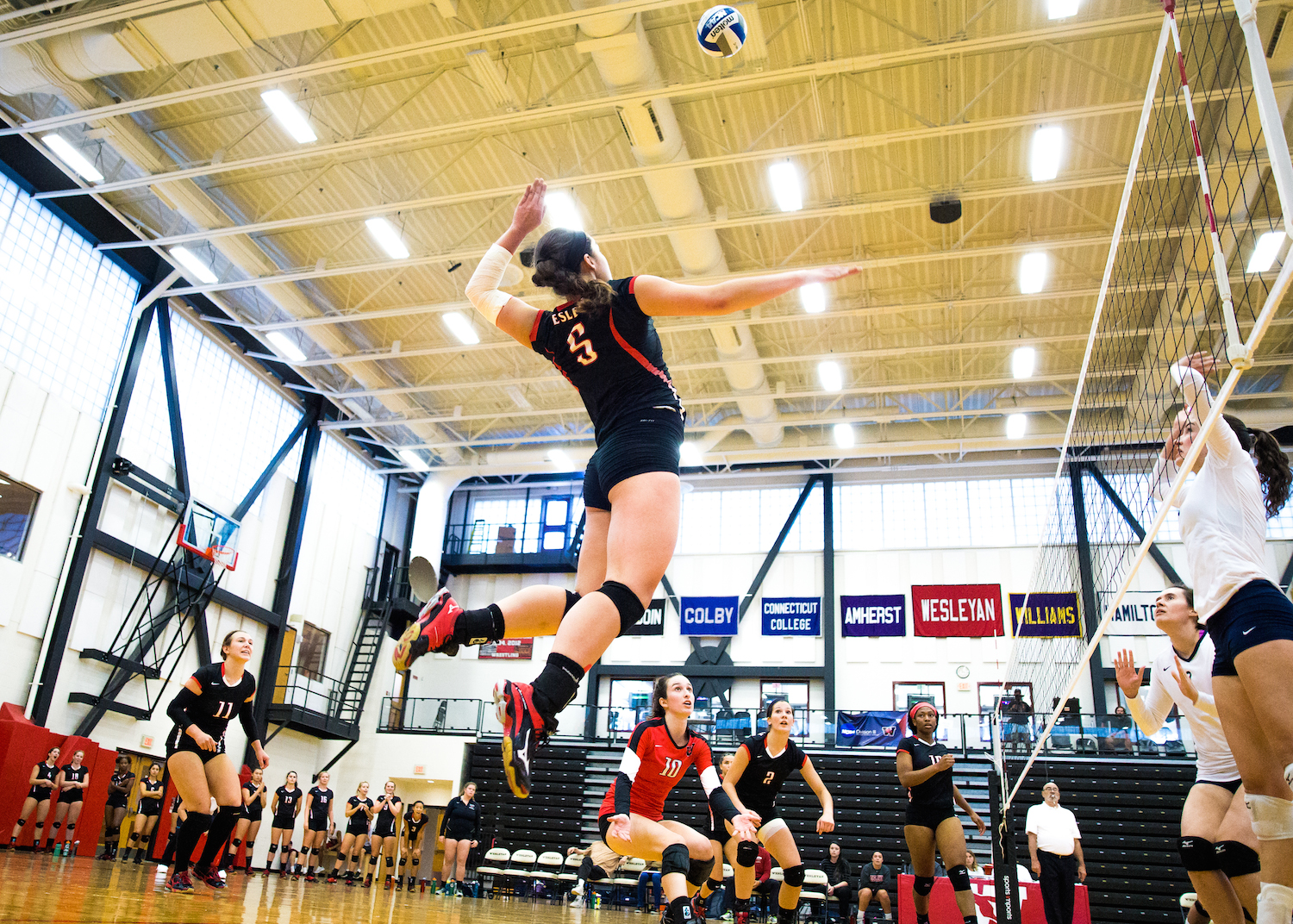 Volleyball tore through its first NESCAC matches, defeating both Hamilton and Middlebury at home this weekend. Friday’s contest against Hamilton went smoothly as the Cards took the match by a score of three sets to one. Saturday’s match proved a greater challenge, but the Cards managed to pull out a fifth set win against Middlebury, pushing their season record to 4-1.

Wesleyan starters Rachel Savage ’17, Nicole Hilton ’20, Sarah Swenson ’18, Madeleine Lundberg ’19, Gabby Bennett ’20, Mia Hogan ’20, and Audrey Konow ’20 got off to a slow start against a strong Hamilton offense. Hamilton hitters Kyndal Burdin and Margaret O’Brien towered at the net, making great blocks and spikes early in the match. Hogan and Bennett kept the Cards close with some great blocks of their own and crafty offensive play.

At a score of 9-12, a trailing Wesleyan side called a timeout. After a speech from Coach Ben Somera, the Cards exploded to take the lead at 14-12, with Hilton now controlling play from the net.

Hamilton stuck close, however, catching up to make the score an exciting 21 all. No matter how hard they tried, Hamilton’s defense could not keep up with the dominant Cardinal net play, and the Cards managed to take the set 25-22.

The second set began much like the first, with Hamilton in control early on. Though the Continentals surged to an early lead, Wesleyan took advantage of many Hamilton errors to tighten the score. At 14-15, with the Cards down by only a point, Hamilton launched into an offensive onslaught led by Giulunia Rankin. Hamilton’s offensive explosion won them the set handily 25-15.

The tone of the third set was established right away with a booming spike by Hilton. Wesleyan came out aggressively, no longer playing in response to Hamilton. The two teams stayed close throughout the set, with Kailee Chimento ’20 making several beautifully placed spikes.

At 18-16, with Wesleyan ahead, Hamilton took a timeout. Screaming Wesleyan students cheered on the Cards as they retook the court. Another Hamilton timeout at 22-19, with Wesleyan up, was not able to stop the Cards’ momentum, and the home favorites took the set 25-21.

The Cards charged into the fourth set and quickly pulled away from a rattled Hamilton. Hamilton made an ill-fated run in the middle of the set but could not make up enough ground. Wesleyan took the set 25-16, winning its NESCAC opener in four thrilling sets.

The team’s players were excited about their strong win, but acknowledged there is still room for improvement.

“I think it went well, but there are definitely things we can learn from it and we are going to try to use those things for the game today [against Middlebury],” Emma Robin ’19 said on Saturday morning.

“Although the first set started out close, we finished strong and gained momentum for the second set,” Hilton said.

On Saturday, Wesleyan added two first years to the starting line-up: Olivia Guidotti ’20 and Stasie Litinsky ’20. The Cards came out strong and took an early lead at 4-1. From then on, the set was close and characterized by defense, with Guidotti and Savage recording some terrific digs for the Cards.

The Panthers encroached on Wesleyan’s lead late into the set. Several formidable cross-court spikes by Litinsky couldn’t keep Middlebury back. The visitors made a kill to even the score at 23 all and then took the set, 23-25.

The second set began with the two teams locked in intense competition. The steady play continued until the score reached 17-15. At this point, the Cards pulled away with fantastic kills by Swenson to win the set 25-17.

The Panthers rolled over the Cards in the third set, winning it easily 14-25. An unshaken Wesleyan did not let the match get away. The team rallied to win the fourth set 25-22.

A tense fifth set began with Wesleyan trailing. A kill from Litinsky and some attack errors by the Panthers evened the score at four apiece. Another kill by Litinsky and then a service ace by Lundberg gave the Cards the lead. Wesleyan never looked back, capturing the set and the match by a score of three sets to two.

Both wins were of particular significance to the team, as each vindicated last year’s losses to the two NESCAC rivals.

“It felt really good to sweep our first NESCAC weekend,” Savage said. “We played disciplined volleyball and this weekend’s matches were the materialization of all the hard work we’ve been putting in in preseason and the past few weeks.”

“We are very excited,” she said. “It was a great game and we are super pumped about the outcome and the sweep this weekend.”