Students Team Up with Middletown to Protest the Dakota Access Pipeline 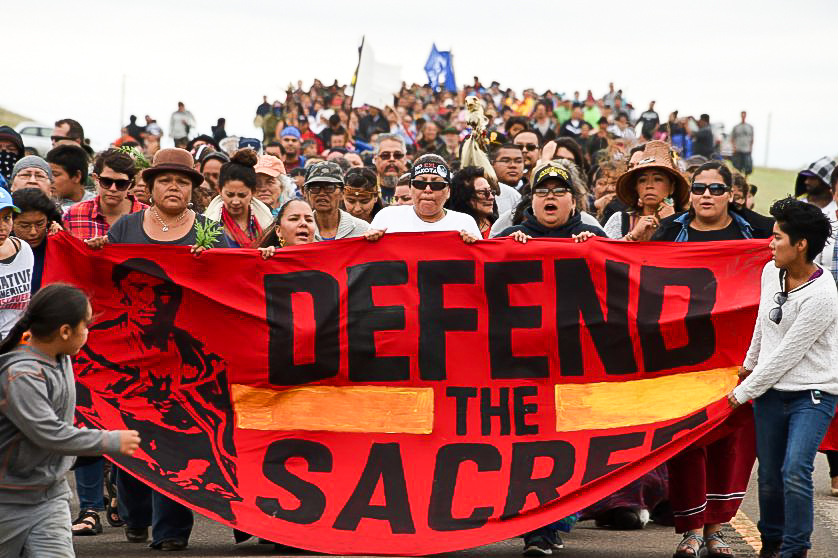 More than 125 concerned students, fervent Middletown inhabitants, and intrigued residents of the greater Connecticut area demonstrated this past Friday outside TD Bank on Washington Street to express their disdain for the bank’s investment in the Dakota Access Pipeline (DAPL).

“I think the main goal was to have the event in a very visible location, right in front of TD Bank,” Robin Waterman ’19 said. “We wanted to gain media attention and to make the administration in the bank think about their actions. But also, by having it organized by Middletown members, it is really putting the emphasis on the community at large, and not just coming from a place of privilege here at Wesleyan.”

The gathering was organized by the Dragonfly Climate Collective, which, according to its website, is an “all-volunteer group that takes direct action in solidarity with communities disproportionately impacted by the climate crisis.”

“There is fundamental disregard for the customs and lifestyle as we see with the destruction of burial sites,” Sina Moravej of Dragonfly Climate Collective wrote in an email to The Argus. “Residents of that area also have legitimate concerns about the quality of the drinking water. In this area, I am hoping to use my voice to bring attention to voices that are not being heard or respected. I love the drinking water at my own house and I think everyone should have the right to that quality.”

The Collective teamed up with a few student groups at the University, including Wesleyan Fossil Fuel Divest and Wesleyan Young Democratic Socialists.

“Not only is it important for students to organize on campus, but it is also important for students to show up for events organized by members of the larger Middletown community,” Joshua Nodiff ’19 wrote in an email to The Argus. “This action embodied the relationship we strive to have with our Middletown neighbors, and illustrated the power of community organizing and its ability to bring together students, faculty, and Middletown residents to collectively create social change and demonstrate resistance against the tyranny of plutocracy.”

DAPL is a $3.8 billion project and the fracked-oil pipeline consumes 1,100 miles in distance. The plan is to cover the Lakota Treaty Territory at the Standing Rock Sioux Reservation in order to then lay the pipe underneath our country’s longest river, the Missouri.

According to Dakota Access LLC, the pipeline created between 2,000 and 4,000 jobs in North Dakota, but only 12 to 15 are considered permanent. Overall, the pipeline is generating approximately 10,000 jobs. The company explains the positives of introducing the pipeline.

The implementation of this pipeline will cause immediate danger to fresh water and the welfare of Native Americans, a concept that often seems to be overlooked.

“The Dakota Access Pipeline would transport crude oil, causing ecological destruction and fueling climate change at the expense of indigenous sovereignty and welfare,” Nodiff wrote. “The pipeline would poison their drinking water, which is a direct violation of the right to live.”

Politicians have failed to understand the importance of Native Americans’ maintenance of their ancestral land.

“I think if you look at the history of most marginalized groups, Native Americans are definitely one of the most prominent,” Waterman said. “This is just another example of the government ignoring people that they see as not having as much power. When the question was a possible leakage in a major city, it was of course no, we have to move the pipeline. When it comes to Native American land, it is just not something that is taken into consideration, and that is why protests are so important.”

Nodiff elaborated on the inexcusable action of our elected officials to bypass those in need for monetary benefits.

“The priority of politicians is to protect profit—in this case, the disastrous Dakota Access Pipeline—and anyone who stands in their way is considered disposable and insignificant,” he said. “Similarly to the ongoing water crisis in Flint, Michigan, this environmental injustice would never take place in an affluent white community. The fossil fuel corporations married to our government will always opt to select a site where the population largely consists of people who are historically marginalized or oppressed. In this case, it is the Standing Rock Sioux Tribe, which illustrates that the United States is adhering to its genocidal history by perpetuating violence against indigenous people.”

An arrest warrant for criminal trespassing was issued to journalist Amy Goodman after she went to North Dakota to report on Native American-led protests against the pipeline. She reported while security guards used dogs and pepper spray to attack demonstrators.

“Amy Goodman is a courageous woman and an inspiration within the world of independent media,” Nodiff wrote. “Her freedom of press was violated and her freedom outside of incarceration was jeopardized because she was seen as a threat by the fossil fuel industry and the larger U.S. plutocracy. I admire her actions and her bravery as she stands up for the transparency and accessibility of independent media.”

Following Judge James Boasberg’s decision to deny the Standing Rock Sioux Tribe’s wish for an injunction against DAPL, a mini-victory came for the oppressed as the U.S. Department of the Interior, Department of Justice, and Army Corps of Engineers publicized a joint statement that effectively pauses all construction bordering Lake Oahe on the Missouri.

“I think in all likelihood a pipeline will get built, but hopefully the goal is to have indigenous rights somewhat more taken into account,” Waterman said. “This has already started with the temporary injunction that was passed. If we can prevent the pipeline from being put right through certain sacred sites, that would at least be something to work for if we cannot stop the whole thing.”

Nodiff emphasized the importance of unity in the fight against the pipeline.

“Because of environmental racism and climate colonialism, it is very likely that a pipeline gets built on a reservation,” Nodiff wrote. “Unless we all come together and ACT NOW!!! We can fight back and defeat this pipeline, and that resistance begins with you. Do not lose hope!”

Waterman hopes that this protest will ignite a fire in students and town residents alike to help ostracized groups within University and Middletown communities.

“I hope people see that there are a lot of people both at Wesleyan and in the community, and then connect it to a larger world network that really cares about indigenous rights and the climate,” Waterman said. “By putting those two things together, they can see intersectionality between these types of issues.”