Football Looks to Regain Control of the Little Three 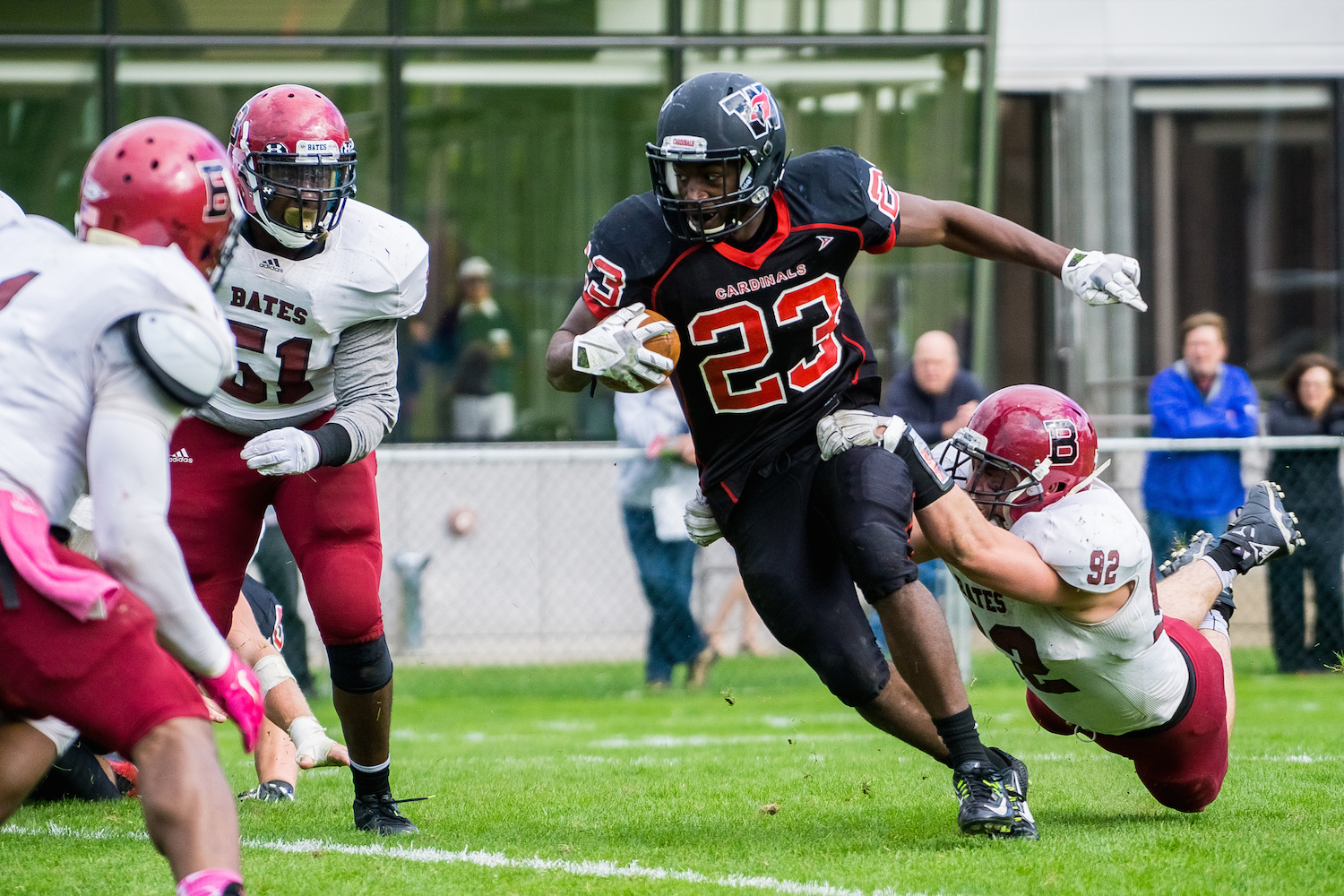 The football team will kick off their 2016 season on Sept. 24 with an away contest against Tufts. The home schedule for the Cardinals begins the following week, facing Hamilton on Oct. 1. With a conference that continues to become more competitive, the team must be at the top of its game to get back to the top of the NESCAC, a crown they shared with Middlebury and Amherst in 2013. To do so, the team must overcome Amherst, a team that has won or shared the NESCAC title in four of the last five seasons. That perpetually exciting rivalry game takes place on Oct. 22 during homecoming weekend.

Besides the scheduling highlights, the team looks to create many on-field highlights as well. In 2015, the team went 5-3, a result that some might call a disappointment after two consecutive 7-1 seasons. That being said, this result is rather impressive considering that last year’s iteration of the Cardinals featured only three returning starters from the 2014 team.

“As a very young team, we still feel good about the results from last year,” Head Coach Dan DiCenzo said.

With 19 starters and 40 varsity players returning from last year, the expectations for the program continue to rise, and that includes the coaching staff. Even though it is DiCenzo’s second year as head coach, he is certainly no stranger to the football program.

“There is a lot of continuity,” he said. “It is my seventh year at Wesleyan, and there wasn’t a lot of change when I moved to head coach from defensive coordinator.”

Some of those players executing that continuity will be senior captains Ben Kurtz ’17, Jordan Stone ’17, and Justin Sanchez ’17. Stone was an All-NESCAC selection last year and will look to continue to wreak havoc on the defensive side of the ball.

“I expect for us to be highly physical, play smart, and to execute play calls successfully on both sides of the ball,” Jaylen Berry ’18 said.

Berry is just one of a stock of highly talented running backs looking to continue the success of Wesleyan’s running game which averaged 188.1 yards per game, second in the NESCAC last season. One of the most exciting aspects of a football team in general, but especially at Wesleyan, is the familial bond forged between the players, a bond that Berry spoke to.

“In order for us to win the league this year, we will need to work together as a team and continue to play for each other every game….I just think as a whole, we as a team just need to come with energy, a mindset to dominate, and a [plan to] execute the plays to perfection this year,” Berry said.

Another reason to get excited about the upcoming football season is the incoming first-year class. With 25 players freshly added to the roster, the team’s level of competition is liable to increase dramatically. Additionally, 10 out of 12 of those first years will be seriously competing for playing time according to DiCenzo. One such recruit is Dario Highsmith ’20, who committed to Wesleyan in January 2016 after previously committing to both the University of Connecticut and the Army University. Highsmith is a running back and receiver who has an attitude any coach would love.

“As far as rivalries go, we don’t concern ourselves with games that haven’t approached yet,” Highsmith said. “We are preparing for Tufts so they are the only opponents that are on our minds.”

Another reason to get excited for Highsmith to be a part of the Wesleyan community is his prowess as a student in addition to his talents on the field. He received the Scholar-Athlete Award from the National Football Foundation and College Hall of Fame Northern Connecticut Chapter during his senior year at Middletown High School. He also cited academics as a big reason he chose to attend Wesleyan.

“The reason I chose Wesleyan is because of the top-tier education that you will receive here,” Highsmith said.

DiCenzo and the rest of the coaching staff also played an important role in his decision.

“I was most excited playing for Coach DiCenzo and the rest of the coaching staff because they’re great coaches and really get us all going…as well as playing under a coach that truly loves and looks out for every one of his players,” Highsmith said.

This is a good sign for the future of the program, particularly if DiCenzo is able to secure more high-level recruits like Highsmith.

Another notable addition to the program is the hiring of a new running backs coach John Capodice, who was fired from his previous head coaching job at Berlin High School for recruiting violations.

“I have known John for a long time….He is a man of integrity and class,” DiCenzo said.