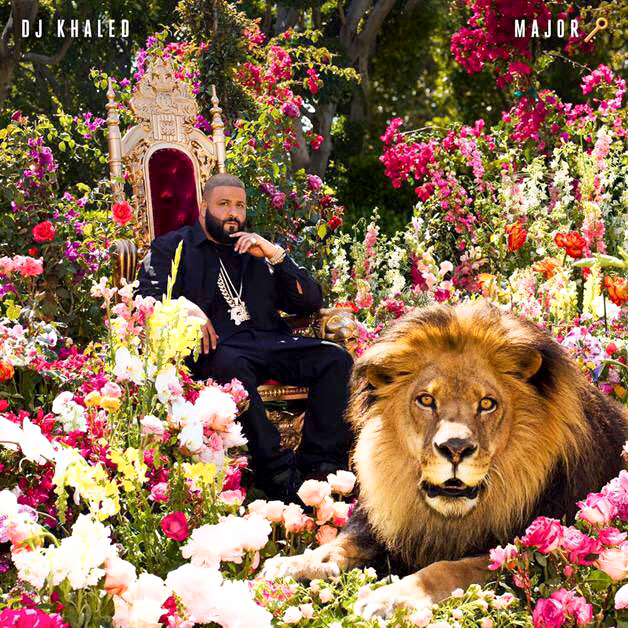 In considering and, God forbid, consuming the entirety of DJ Khaled’s music, one cannot separate the man’s private life from his work.

In fact, Khaled does not have a private life. The 40-year-old DJ (whose given name is Khaled Khaled) has seen resurgence in his career because of his use of Snapchat, where he documents just about every aspect of his life through “stories” in the app.

The concept of his latest album, “Major Key,” stems from Khaled’s sayings on Snapchat. Also known as memes—reoccurring text phrases juxtaposed with corresponding or ironic images—these sayings often make little sense, but they fascinate the masses. Whether it’s his keys to success (accompanied by the key emoji), touching his flowers, or pointing his phone at a statue of a lion and yelling, “LION! All hail to the most-high: the lion order,” Khaled has found a way to give birth to an empty vocabulary that he invites his fans to re-appropriate.

One of the album’s singles, “For Free,” is what DJ Khaled calls, “an anthem,” with little to no regard for the actual definition of an anthem. “For Free” is more of a hastily thrown together sales pitch for Drake to be a gigolo than it is anything remotely resembling an anthem. The song features lyrics like “You know this dick ain’t free! / I got girls that I shoulda made pay for it / Got girls that I should made wait for it / I got girls that’ll cancel a flight back home.” Then, after a myriad of sound effects and DJ Khaled yelling random things, Drake reflects and asks, “Is it just me? / Is it just me? / Or is this sex so good I shouldn’t have to fuck for free?”

Despite the proliferation of Khaled’s Snapchat memes and Drake’s modest proposals throughout the lyrics of the album, there are nonetheless impressive performances. Jay Z delivers a strong throwback performance in the first track, “I Got the Keys,” featuring Future, who appears on several songs in the album and enchants listeners who don’t think his rapping sounds like someone gargling cough syrup.

Other heavy hitters, like Nas and Kendrick Lamar, are at their best in songs like “Nas Album Done” and “Holy Key.” Both rappers’ lyrics often concern racial justice and “racial economic inequality,” which Nas explicitly says in “Nas Album Done.” The beats, created by Khaled, are elaborate and complement the lyrics, but almost every otherwise satisfactory song is ruined by yelling self-promotional sayings like “We the best!”

Big Sean is perhaps the standout performer of the album, which is significant given that he’s featured alongside rapper Kendrick Lamar. Some of his most powerful lyrics in “Holy Key” are, “Father help us, police doing target practice with real bodies / Mommas in the streets, crying, standing over a still body / N*ggas over stressing, we under investigation.”

Major Key on the whole, however, suffers from a case of diminishing returns in its guest appearances.

Khaled is mistaken in his belief that adding another Nicki Minaj, another Future, another Chris Brown, another Jeezy, another Gucci Mane, another Drake, or another Lil’ Wayne will make the album better. Instead, these talented solo performers cancel each other out.

In his Snapchat confessions, Khaled speaks in grandiose terms of wanting to be “iconic” and “legendary” by making “a statement” with his music. Khaled is a social media pioneer and a solid DJ, but he cannot exist at the intersection of the two. So please, DJ Khaled, put your phone down, and think twice before you add “anotha’ one” to the mix.

Of course, this wouldn’t be a DJ Khaled review if some attention wasn’t dedicated to his obnoxious and stupefying Snapchat presence. This could be hyperbolic foreshadowing, but I would not be surprised if DJ Khaled releases a ghost-written memoir about how profoundly lonely he was during his peak Snapchat fame, insofar as it’s fame and not just millions of people laughing at how ridiculous of a person he is to record every decadent facet of his life, ten seconds at a time.

Watching DJ Khaled’s snap stories all the way through—which can be emotionally taxing and even psychologically grueling whether they’re longer or shorter than his terrible album—provides insight into the performer’s life that he himself lacks. For one, any Snap viewer can very clearly tell that DJ Khaled does not have a flourishing love life despite reportedly having a fiancée, who has appeared in one now deleted Snap video where she roasts Khaled for filming her. Another easy conclusion to draw is that DJ Khaled has no friends. Instead, he has a team of sycophants who want to boost their exposure on his account and other famous people who blatantly make fun of him when they appear on his stories without him knowing.

Finally, there comes the important question. It’s not, “What is the point of DJ Khaled’s Snapchat?” or, “Is he a living meme?” The real question for any passive observer—or fan (somehow)—of DJ Khaled is, “What is DJ Khaled’s interior life?” The answer to that question is quite simply that he has none. He has decided to commodify himself to such an extent that he’s no longer a brand or even a meme. DJ Khaled exists only as the image of himself, which currently is an ephemeral ten-second video on Snapchat that you wish you hadn’t watched in the first place.