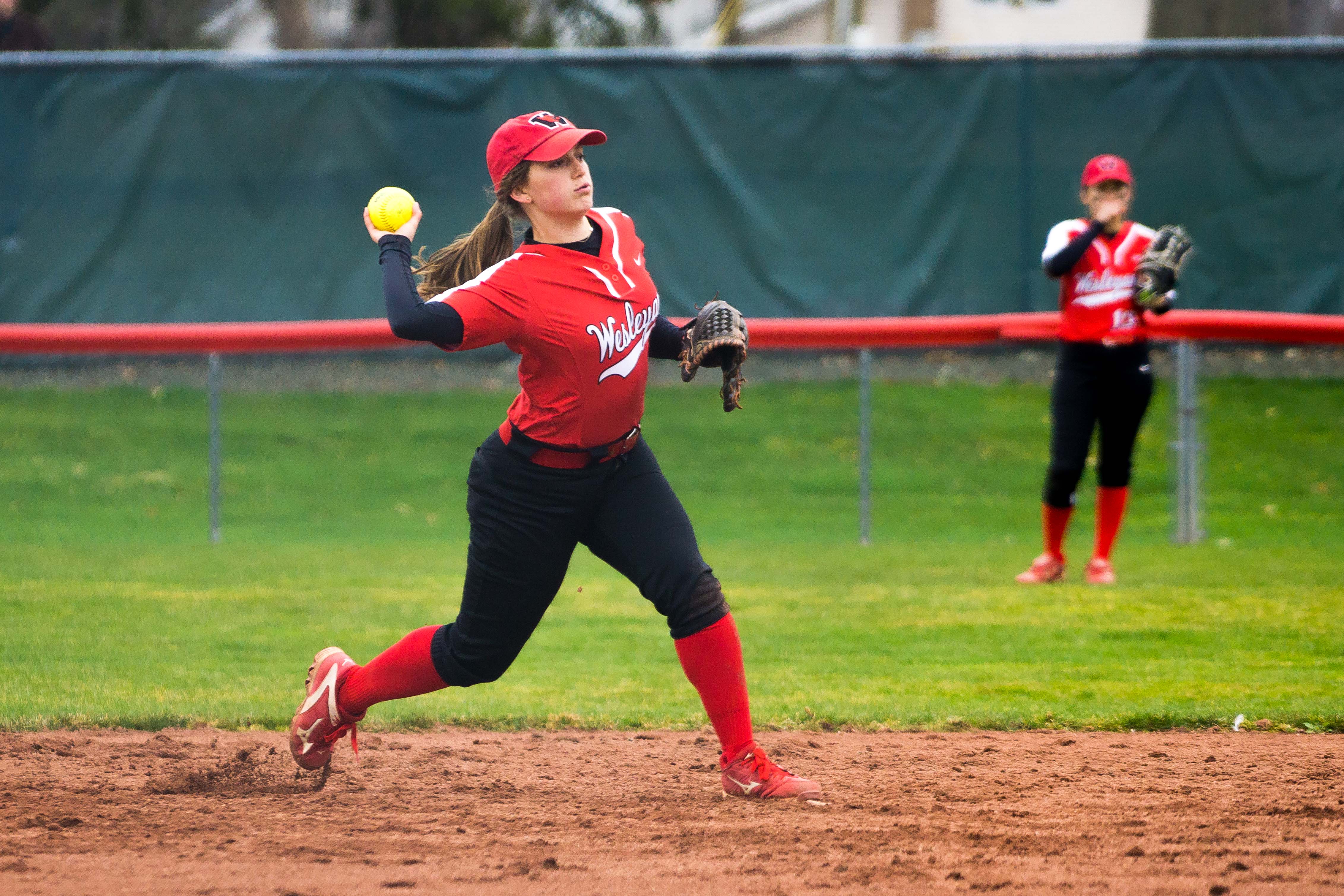 Amherst (23-10, 7-5 NESCAC West) ended the Cardinals’ 2016 softball season by taking two out of three games from the Red and Black. Wes (21-14, 5-7 NESCAC West) came very close to sweeping the series and clinching a playoff birth as the two losses came in extra inning affairs. Amherst won the corner games while Wesleyan came out on top in the middle contest.

Amherst’s first run of the game came in the bottom of the third inning, spoiling Pardo’s hitless opening two frames. A leadoff single and a stolen base put a runner in scoring position with no one out. The next batter, Julia Turner, placed the ball into left field and an error from a Wesleyan fielder allowed the runner to cross the plate. Turner advanced to second base on the throw home. Pardo luckily got out of the jam by fielding a ground ball and getting a popout to second base.

The Cardinals found the equalizer in the top of the fifth inning, when captain Amanda Roosa ’16 started the action off with a single, and then advanced to second base on an error from the Amherst left fielder. Julie McDonald ’18 was hit by a pitch, and with runners on first and second, Pardo singled to load up the bases. Two quick outs off of a strikeout and a popout to first base left the Cardinals desperate for a clutch at-bat from Izzy Linzer ’17. The junior made contact and the Cardinals got a little lucky as the Amherst pitcher committed an error, allowing Roosa to cross and knot the game up at one.

The Birds struggled to create offense for the remainder of the game, but Pardo kept them in it, escaping out of a couple of jams. The senior got a huge force out at third with one out, and then got the next hitter to popout to second base to end the fifth inning unscathed.

After getting two fast outs in the bottom of the seventh, Pardo worked herself into a troubling situation with a walk and a single. Then, Linzer was charged with an error on a ground ball in the hole on a play that would have been tough to make for even the most dexterous of defenders. Now, with the bases loaded, the Cardinals got another chance to bat after Alena Marovitz lined out to Roosa at second base to end the inning.

In the top of the eighth, the Cardinals went down in order, and their fortune of working out of jams would finally run out in the bottom of the frame. With one out, back-to-back singles put the winning run only 120 feet away from home plate, but a ground out to third base once again gave Pardo a chance to get out of the inning and keep the free softball intact.

Pardo would then walk the next batter, loading up the bases and setting the stage for a critical at-bat. With two strikes, Pardo dropped in a nasty curveball on the corner, and started to walk off the mound, thinking the inning was over. Unfortunately, the umpire was not generous, and the inning continued.

Later in the at-bat, a foul ball down the left field line gave Jamie Hom ’17 a diving attempt to end the inning, but she could not make the play. Turner then singled in the winning run on a walk-off, giving Amherst the 2-1 victory.

The two teams traveled back to Middletown for a doubleheader this past Saturday. Wesleyan took the early game in another defensive battle, this time 3-1. McDonald picked up her ninth win of the season, throwing a complete game, allowing one run on just four hits.

Roosa crossed the plate first for Wesleyan in the top of the second on an RBI double from Pardo. The captain scored all the way from first base after commencing the inning with a single up the middle.

After allowing a leadoff single and a stolen base to start the third inning, Turner gave Amherst a runner on third base after grounding out to second. The Purple and White capitalized on the situation, getting on the board with a sacrifice fly to left field. For the next four innings, McDonald would only surrender one more hit.

Wesleyan would get two more in the top of the sixth on an RBI double from Rachel Kantor ’19, scoring Roosa. Kantor then touched home on a single from Annalie Walsh-Costello ’16. McDonald closed out the final three batters with two fly outs to left field and a swinging strikeout to close off the game.

The final game of the series made up for a lack of offense in the prior two, with the two sides combining for 16 tallies. Amherst won its seventh conference game of the season, taking down Wes in 10 innings, 9-7.

On less than a day of rest, Pardo struggled in her final start donning the Red and Black. She threw just 3.2 innings, giving up six runs on six hits, striking out four Amherst batters.

Wes got the scoring going in the top half of the first inning with an RBI double from Rielly Wieners ’18, scoring Angelina Massoia ’16.

The away team used three strong innings to secure the win, picking up three runs in each of these frames. A two RBI triple and a sacrifice fly in the top of the second gave Amherst a 3-1 advantage.

The Cardinals would cut the deficit in half with another Wieners RBI on a sacrifice fly in the bottom of the third, once again plating Massoia.

Trailing 6-2, the Cardinals got three of the four runs back needed to tie the game in the bottom of the sixth inning. Pardo doubled home Linzer, Kantor grounded out to shortstop which plated Roosa, and the Wesleyan ace crossed home on a double to left from Walsh-Costello.

With one out in the bottom of the seventh, Pardo came up clutch in what could have been her final at-bat as a Cardinal, tying the game up at six on a RBI single, scoring Olivia Gorman ’19.

With McDonald on the mound, Amherst ruined the seniors’ final game at home and won the game with three runs in the top half of the tenth inning. The Cardinals would not go down easy, getting one run back on an RBI double from Kantor that brought home Pardo. After this, three Cardinals went down consecutively via a strikeout, a popout behind the plate, and a popout to second base.

It will be a tough task for the Cardinals to overcome graduating five seniors, two of whom are matriculating early. Even so, the team will be in position to qualify for the postseason with the heart of its roster consisting of rising sophomores and juniors.